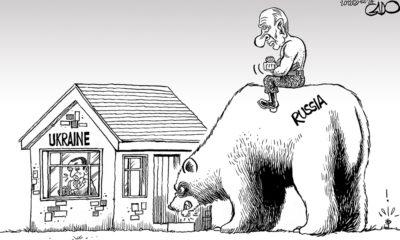 That is the tragedy of history, of Europe’s regional wars that have been resurrected from the past. The relatively long lull from regional wars that Europe enjoyed in the post-World War II era, which survived during the nerve-wracking tensions of the Cold War, is over.

The cataclysm of war is convulsing the European subcontinent following the Russian invasion of Ukraine, shattering more than seventy years of relative peace since the end of World War II. Europeans had brashly and complacently convinced themselves such a conflagration was buried in their war-ridden pasts, banished to the unfortunate lands of the global South struggling with the modernity, development, democracy, and advancement Europe and its civilizational outposts in North America and Australasia had bequeathed to the world. The nightmare of war has returned with a ferocity that has shocked Europe and threatens to upend the already unstable global order.

From the vantage point of African history, this is a post-colonial war, a war between a former colonial power, Russia, and its former colony, Ukraine. It is inflamed by the combustible logic of post-Cold War competitive imperialisms of a resurgent, belligerent, and repressive Russia seeking to recover great power status from the demise of the Soviet Union, and a triumphalist, assertive, and expansive NATO determined to maintain its supremacy in Euro-America.

We live in a world driven at its core by the memories, legacies, and contestations of imperialism and colonialism that created the modern world system with its hierarchies, divisions, inequalities, and conflicts. This postcolonial unconscious is readily apparent to many of us reared in the global South where the colonial permeates and perverts the mentalities and materialities of social life from the mundane to matters of state and global relations. Not surprisingly, some of the most powerful speeches at the emergency meeting of the United Nations Security Council on the cusp of the Russian invasion of Ukraine were delivered by African diplomats.