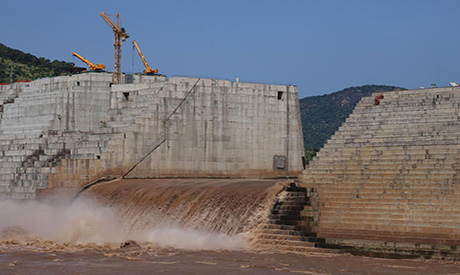 A file photo of Grand Ethiopian Renassiance Dam in September 2019 in Ethiopia (Photo:Reuters)

Ethiopia says it will commit to the guidelines and rules agreed upon with Egypt and Sudan on the initial filling and annual operation of its Grand Ethiopian Renaissance Dam (GERD), but it added that Cairo will be to blame if the current GERD talks reach a dead end.

In an official statement on Sunday, Ethiopia’s Ministry of Water, Irrigation and Energy said it recognises “the progress made in the past few days of the negotiation.”

The tripartite talks between the three countries continued for a fourth day on Saturday, where they negotiated technical issues related to the initial filling and annual operation of the dam.

“Based on the filling schedule for the GERD, the countries reached an understanding on the guidelines for the first stage of filling, the volume of environmental flow, and the drought management rules,” it said.

It also said that Egypt, Ethiopia and Sudan have reached “an understanding on dam safety rules, environmental and social impact assessment studies, and the entry into force of the guidelines and rules.”

Ethiopia stressed that it will be bound by the guidelines and rules for the initial filling and annual operation of the GERD that it will sign with downstream countries Egypt and Sudan.

It said that such a commitment will only be guided by the 2015 Declaration of Principles that stipulates relevant international principles that are adequate for its dam, stressing that “the ongoing negotiation is not on the allocation of the Blue Nile waters.”

The Ethiopian statement signaling progress in the talks came one day after Egypt said the talks were collapsing, blaming what it described as Ethiopia’s “intransigence” during the latest meetings between the water ministers of Cairo, Addis Ababa and Khartoum.

In statements to reporters on Saturday, the Egyptian Ministry of Water Resources and Irrigation spokesman said he is “not optimistic about the prospects of achieving a breakthrough during the ongoing negotiations on the Grand Ethiopian Renaissance Dam.”

The faltering in talks was mainly due to a proposal by Ethiopia during Thursday’s meeting which Egypt described as a “deeply troubling document that is both technically unsound and legally inadequate,” which is despite the “considerable flexibility” displayed by Egypt during the talks.

Addis Ababa said the Egyptian statement was “regrettable,” stressing that progress was made and “if the ongoing negotiation is to falter, it will only be because of Egypt’s insistence on maintaining a colonial based water allocation agreement that denies Ethiopia and all the upstream countries their natural and legitimate rights.”

“Any attempt to confuse the international community or campaign to exert maximum pressure on Ethiopia to accept colonial based treaties to which it is not a party, or to abandon its legitimate right to use the Blue Nile, camouflaged in the guidelines and rules on the initial filling and annual operation, is unacceptable,” it added.

Ethiopia called for “a genuine negotiation based on good faith and transparency that will result in finalising the process with a win-win outcome.”

As per an agreement by the three countries, the negotiations will reconvene on Monday under Egypt’s chairmanship to continue “negotiation on outstanding issues.”

The growing conflict has led to a diplomatic war of words between Cairo and Addis Ababa in the past months that landed at the UN Security Council.