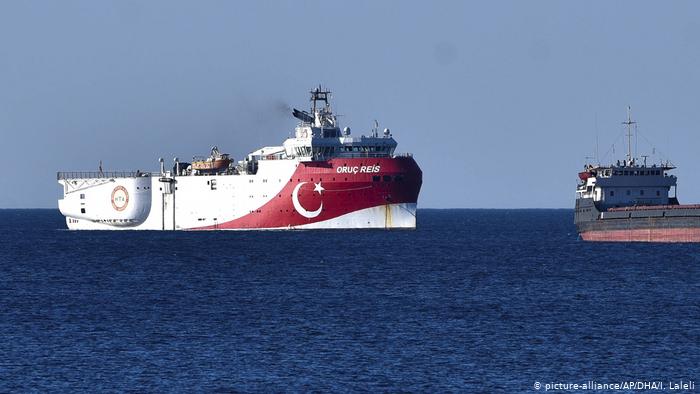 The dispute about maritime territories between Turkey and Greece is heating up. Egypt’s involvement has added a new dimension to the conflict, the Middle East analyst Stephan Roll says.

For the second time in weeks, the NATO allies Greece and Turkey have mobilized their fleets for a standoff. Greece’s government considers Turkey’s surveying of the waters south of the island of Kastellorizo a provocation. Last week, Greece, which claims the waters and other areas south of Greek islands as an exclusive economic zone, signed an accord with Egypt to define the countries’ respective EEZs in the Eastern Mediterranean. Turkey’s government has called it a “pirate agreement” — and used the move as an opportunity to restart seismic surveys in the region that had been on hold as a result of mediation by German Chancellor Angela Merkel and the European Union.

The conflict is about more than natural gas reserves and economic zones, says Stephan Roll, the head of the Middle East and Africa research division at the German Institute for International and Security Affairs (SWP). It is an extension of the conflict between Turkey and Egypt, which is also playing out in Libya’s civil war, Roll told DW.

DW: Greece and Egypt have been negotiating the division of their respective EEZs for almost 15 years. As of August 13, they have an agreement, signed by the Greek and Egyptian foreign ministers in Cairo. Why the sudden rush?

Stephan Roll: This agreement is directly related to the EEZ agreement signed by Turkey and Libya in November 2019, which Greece and Egypt saw as a massive violation of their interests. I don’t know to what extent Athens and Cairo negotiated a perfect agreement. In the end, it was a question of putting Turkey in its place.

The EEZ agreement between Greece and Egypt does not take into account the areas east of the island of Rhodes to the easternmost Greek island of Kastellorizo. Those negotiations are still ongoing. Why is that?

The most important thing was sending a message to Ankara, as quickly as possible, making it clear that they would not tolerate Turkey redefining its maritime borders. That could explain why the agreement was signed now and why the details still need to be negotiated.

We’re seeing a tense situation between Greece and Turkey, but also between Egypt and Turkey. What is that all about?

First and foremost, it is clearly about gas deposits. It is very important for Egypt to develop them: The country’s energy strategy rests on large-scale gas exports. But, ultimately, this conflict with Turkey is much, much bigger. It goes back to the 2013 military coup in Egypt, which targeted the ruling Muslim Brotherhood. Cairo accuses Turkey of supporting the Muslim Brotherhood, and to an extent that is true. Many senior members of the Muslim Brotherhood are in exile in Turkey. Egypt’s leadership feels markedly threatened by Turkey, which it has accused of planning a countercoup. Stephan Roll is head of the Middle East and Africa research division at the German Institute for International and Security Affairs. Roll’s areas of expertise include Egypt, Saudi Arabia, elites and social mobilization in Arab countries

The Turkish-Libyan EEZ agreement and Turkey’s engagement in Libya have infused the current conflict with a new dynamic. The fact that Turkey is very active in Libya and has sent mercenaries to the country to fight on the side of the government against General Haftar, who in turn is supported by Egypt, is a new situation for Cairo. Cairo feels extremely threatened by the fact that Ankara is suddenly part of the action in its own backyard.

What are the positions of the other Arab states regarding the division of the EEZ in the Eastern Mediterranean?

They tend to see the larger conflict. Qatar, for instance, is clearly on Ankara’s side. Turkey has its own military presence in the country, and Qatar also supports the Muslim Brotherhood. Egypt’s supporters, above all Saudi Arabia and the United Arab Emirates, are critical of Turkey. The North African states are neutral for the most part: They do not choose sides but ultimately try to maintain good relations with both sides.

The EEZs agreed to by Egypt and Greece partly overlap with the economic zones claimed by Turkey and Libya. Will this inevitably lead to armed conflict?

I can’t imagine that this will lead to an armed conflict. Neither Turkey nor Greece and certainly not Egypt is looking for a direct confrontation, especially since the outcome would be uncertain. Nor are the European Union and NATO at all interested in a clash between Greece and Turkey. There have always been moments in the past when the situation escalated, but these incidents were contained. What we are seeing at the moment are threatening gestures. But, in this region, you never know. Things can move in a different direction totally by chance: Shots fired somewhere are an incident that could develop a momentum of its own. In response to Turkey’s interference in Libya, Egypt’s Parliament has given President Abdel-Fattah el-Sissi the green light to send troops to Libya. Shouldn’t we be taking this seriously?

Yes, that is to be taken seriously. I can well imagine Egypt intervening in Libya’s conflict and stationing troops across the border; however, it is more a question of maintaining existing front lines. It is not an expansionist strategy: It is not about marching to Tripoli and risking a direct confrontation with Turkey. Egypt wants to support its own allies, General Haftar’s troops.

Who could mediate the dispute about maritime law regions and the conflict in Libya? The United States?

The US has not yet decided which side to take concerning the conflicts in the Eastern Mediterranean: Turkey’s side in the Libyan conflict and against Egypt and Russia — or vice versa? There has also been a new development. US ties with Egypt are no longer as unencumbered as they once were; cracks have appeared. In many respects Egypt behaves just like Turkey. Cairo, like Ankara, bought Russian weapons systems in defiance of US wishes. Everyone plays their own game and does not adhere to traditional alliance structures.

It seems that the European Union is not able to  mediate because there is not a unified EU position on Turkey. France, for example, has taken a very clear stance against Ankara. Could Germany take on the role of mediator? Would that be acceptable to all parties?

It would be acceptable because the Germans clearly have no self-interest. The question is whether Germany would have enough weight for results in the region — I doubt that. Take the Berlin Process, which Germany launched to resolve the Libyan conflict. There was no follow-up. Germany was not able to influence the parties to stick to the agreement. Germany is not powerful enough. At the moment it can only help in the short term in an urgent situation, like Chancellor Angela Merkel’s telephone conversation with Turkish President Erdogan a few weeks ago. That contributed to averting an armed conflict between Turkish and Greek warships on the Aegean Sea.

Israel has been quiet in the conflict zones in the Eastern Mediterranean. Israel has an EEZ agreement with Cyprus and seems to have come to an understanding with Lebanon and Egypt as to who is entitled to which maritime areas. Ankara never misses an opportunity to rant against Israel. Why has it stayed out of the current dispute?

Israel is in a difficult situation. In fact, Egypt has turned into an increasingly good partner, though that doesn’t apply to the Egyptian people but the government, the secret service and the military apparatus. In the long run, it is completely unclear where Egypt is headed. The Israelis were uncomfortable with Cairo’s purchase of Russian fighter jets a few weeks ago. Certainly Turkey is the more interesting country for Israel in the region — it has more to offer from an economic point of view, which makes it more important for the Israeli economy. Israel has no interest in this relationship going further and further down the drain. But, above all, Israel currently faces considerable domestic political problems, so, for the government, this smoldering conflict in the Mediterranean has likely moved to the back burner.