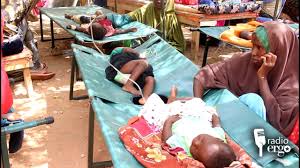 Efforts are underway to contain an outbreak of acute watery diarrhoea that has been spreading in the southern Somali district of Beletweyne over recent days, not long after severe flooding hit the area.

A health centre set up by the Hirshabelle administration in El-Jalle, on the outskirts of Beletweyne town, is treating 71 people including 66 children, who were referred there as the other local hospitals are full.

The health centre, located in an area hosting a large number of displaced people, is being run by a staff of 12 doctors and 20 nurses picked from hospitals in Hiran region.

The centre is being supported by international NGO, Save the Children. Medical supplies have been donated by Hubaal, a local private finance company.

However, there is still an unknown number of patients seeking help at local pharmacies, while others are sick at home, according to Dr Abdihalin Mohamed Abdullahi, the deputy director at Beletweyne general hospital.

“There are a huge number of people in [privately run] pharmacies on intravenous drips hanging from the doors and windows. These people are sometimes afraid of coming to the health centre. However, I would like to tell the people that they should come to see the right doctors who are at this facility,” he said.

Dr Abdihalin said patients from across Hiran region were arriving day and night.

Hodan Mohamed Adan has been watching day and night over her son and daughter, who are among the diarrhoea patients transferred from Beletweyne general hospital to El-Jalle.

“I rushed my children to the hospital at 3:00 am on the 25 January when I got very worried for their lives. Since I brought them here, they have improved a lot and they are getting better,” Hodan said.

Dr Abdihalin attributed the outbreak to the consumption of contaminated water from the Shabelle river. He noted the majority of patients were from the remote villages and IDP camps, where access to safe drinking water is lacking.

Beelo Abdinor Adan, a mother of seven, said two of her children fell sick due to the river water.

“We were using the river water, but now I am using clean water. My daughter got diarrhoea and I took her to hospital only to be informed that my son had fallen sick too. They are now on intravenous drips and recovering,” Beelo told Radio Ergo.

Dr Qorane Mohamud, Hirshabelle ministry of health officer in Beletweyne, said that six people died in the general hospital, and two died in the new centre for diarrhoea patients in El-Jalle. Testing for suspected for cholera is in process.