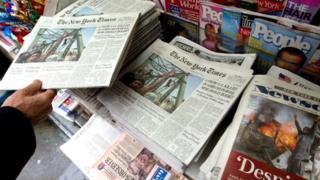 China is expelling US journalists from three major US newspapers [File: Jason Lee/Reuters]

China has said it will revoke the credentials of journalists at three American newspapers in response to new US restrictions on Chinese media.

Beijing is demanding that US journalists working for the New York Times, Wall Street Journal and Washington Post newspapers, whose credentials are due to expire before the end of 2020, hand back their press cards within 10 days, according to a statement.

It was not immediately clear how many journalists would be affected.

Beijing on Tuesday said those journalists will not be allowed to keep working in mainland China, Hong Kong or Macao.

The move comes after the administration of President Donald Trump designated five Chinese media outlets as foreign missions and restricted the number of Chinese nationals that could work for them.

Beijing said the steps were necessary and reciprocal countermeasures in response to what it called unreasonable oppression of Chinese media in the United States.

“The US expulsion of Chinese journalists was an upgraded evidence of political oppression,” tweeted Hua Chunying, a spokeswoman for China’s Foreign Ministry on Tuesday. “For too long, the Chinese journalists have been unfairly treated under the discriminatory policies of the US.”

The US announced earlier this month that five state-controlled Chinese media outlets would be restricted to 100 visas, a de-facto expulsion of about one-third of their Chinese staff. It cited increasingly harsh surveillance, harassment and intimidation of US and other foreign journalists working in China.

The Chinese outlets, which employ about 160 Chinese citizens in the US, include the official Xinhua News Agency and China Global Television Network, or CGTN, the overseas arm of state broadcaster CCTV.

China had previously expelled three Wall Street Journal reporters in February over the newspaper’s coverage of the coronavirus outbreak.

US Secretary of State Mike Pompeo on Tuesday urged Beijing to reconsider the move.

“I regret China’s decision today to further foreclose the world’s ability to conduct the free press operations that, frankly, would be really good for the Chinese people in these incredibly challenging global times, where more information, more transparency are what will save lives,” Pompeo told reporters.

“This is unfortunate,” Pompeo said. “I hope they will reconsider.”