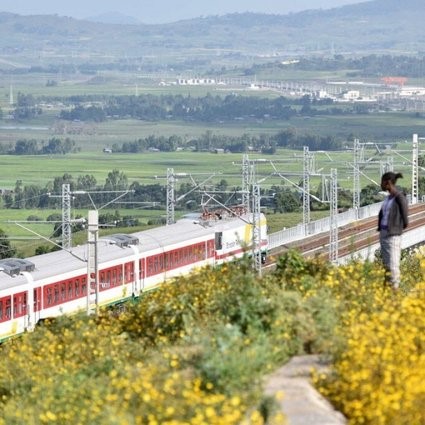 If there is an African country that has sought to emulate the Chinese development model, it is
Ethiopia

. In the capital Addis Ababa, evidence of Chinese money and influence is everywhere: roads, skyscrapers, airports and an electrified railway.

But Ethiopia is facing challenges in servicing loans it took on to build rail links and other infrastructure projects. The The coronavirus pandemic and deadly Tigray war have compounded this, pushing the country into high risk of debt distress and raising questions over the risks attached to some of China’s investments.

Ethiopia is the second-largest recipient of Chinese loans in Africa after Angola. It received US$13.7 billion of the US$148 billion in loans that China advanced to African countries between 2000 and 2018, according to the China Africa ­Research Initiative at Johns Hopkins University.

Ethiopia is a key Chinese ally and home to major projects under China’s transnational infrastructure strategy the Belt and Road Initiative . The Ethiopia-Djibouti railway, Africa’s first cross-country electric railway and majority funded by Exim Bank of China (Eximbank), is one example.

Aspiring to become a major middle-income country by 2025, the landlocked Ethiopia spent US$4.5 billion to build a railway line from Addis Ababa to the ports of its coast-facing neighbour Djibouti. Construction was completed in 2016, providing a gateway to the Red Sea, but US$2.49 billion of the cost had been borrowed from Eximbank.

Commercial operation of the Addis Ababa-Djibouti railway did not begin until January 2018, because of delays in putting up power infrastructure.

Yunnan Chen, a senior research officer at the Overseas Development Institute who has done field studies on Ethiopian rail infrastructure, said a glut of railway funding from China had come in the first half of the last decade when there was a lot of Chinese capital available and contractors saw opportunities in Africa and Asia where governments had rail development plans.

How much debt has the Belt and Road Initiative accrued, and what’s next?

A decade on, she said, those railways had in many cases endured profitability issues because the economic rationale for building them from scratch had been very thin, and they would always need to be subsidised.

Ethiopia’s railway was not supposed to make a profit but “was meant to stimulate wider economic growth through industrial development and land investment”, Chen said.

The pandemic and collapsing global trade, along with Ethiopia’s domestic security issues, have made the prospect of railway infrastructure investment paying off even more remote.

“For railways, it seems, the light at the end of the tunnel remains dim,” Chen said.

“China’s rapid expansion of overseas development finance in Africa and elsewhere to large, risky railway projects does not seem to have paid off.”

Ethiopia had previously spent US$475 million building the Addis Ababa Light Rail Transit, which was 85 per cent financed by Eximbank and opened in 2015.

Istvan Tarrosy, director of the Africa Research Centre at Hungary’s University of Pecs, who has conducted studies on Ethiopia’s railways, said the projects had faced numerous challenges, including “a constant lack of income”.

“With very low ticket prices, overcrowded and limited trams, and power issues, it [was] difficult to generate sufficient income” from the light rail, he said.

Tarrosy said the Ethiopian Railway Corporation had a US$3.7 billion debt as a result of building the Ethiopia-Djibouti railway and began to repay the loan before it could begin commercial operations.

Even before the coronavirus struck, the railway projects were not generating enough revenue to pay back the loans used to build them. The electrified Standard Gauge Railway reported US$40 million in revenue in 2019, but its operating costs were US$70 million, according to official data.

Ethiopia has sought debt relief from China and other Group of 20 nations to cope with the impact of the pandemic. It is also seeking to restructure Chinese loans for the railway line, and in January said it intended to seek restructuring of public external debt via the G20.

Debt negotiations with Chinese lenders is on top of a 2018 agreement allowing the Standard Gauge Railway’s loan repayment to be made over 30 rather than 10 years.

The Tigray conflict has prompted the government to divert resources to fight rebels in the country’s north, where thousands of people including civilians have been killed.

Despite the risks, Tarrosy said it remained in China’s interests to continue to fund rail projects in Africa. But he expected Chinese lenders to adjust their approach.

“I expect Chinese actors, both state-owned and private, will be more cautious, and keep an eye on what competitors … offer to African governments for their infrastructure plans,” he said.

“This might make it more difficult for African governments to get the resources they need.”