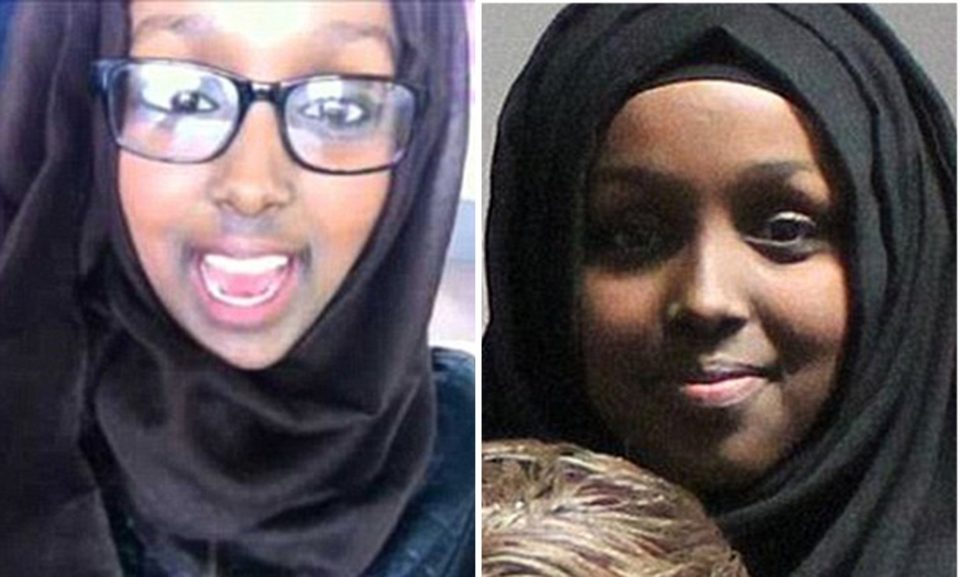 Salma and Zahra Halane (R) left their home in the UK in 2014 to join the Islamic State group (social media)
Zahra and Salma Halane, who want to be repatriated to Denmark, the country of their birth, said the camp in Syria lacked health care and provided dirty yellow drinking water

Two British twins suspected of travelling to Syria to join the Islamic State (IS) group in 2014 are now being detained at a high-security detention centre after trying to escape a Syrian refugee camp.

Zahra and Salma Halane were 16-years-old when they disappeared six years ago from their family home in Chorlton, south Manchester, in England. The twins are believed to have flown to Turkey before crossing the border into Syria.

Their story garnered international coverage at the time as a UK counterterrorism team took up their case, investigating why and how they went to Syria.

While their Somali-British family pleaded for the teens to come home, the twins initially said they had no intention of returning.

Now reportedly banned from returning to the UK, according to their mother, the twins told ITV News on Monday that they had denounced the Islamic State group and want to be repatriated to Denmark, the country of their birth. The Halane sisters are believed to have fled territory controlled by IS last year, landing at a refugee camp with Zahra’s young son. Initially content with the camp, the now 22-year-old twins stayed there for around 16 months before trying to escape.

“I had never thought of leaving. Things were good. We had WHO [the World Health Organisation] checking me and my sister but the situation became very bad,” Salma said during her interview with ITV News.

“The water is yellow. I am suffering. I have injuries on me and my nephew and my sister. She has injuries on her head.

Their recent attempt to flee the camp was spoiled by Kurdish security services who arrested the young women, sending them to a high-security detention centre. It was not immediately clear what had happened to the young boy.

Zahra and Salma are believed to have married IS fighters in Syria after arriving in the country and were later widowed. Their older brother, Ahmed Halane, is also suspected of having links to various militant groups.

Now both sisters say they want nothing to do with the Islamic State group.

It was not immediately clear if the two women were legally barred from returning to the UK, as their family reported, but the country does have a history of rejecting the repatriation of women formerly associated with IS.

Shamima Begum joined IS at the age of 15, along with Kadiza Sultana and Amira Abase, two other London schoolgirls who are both believed to be dead.

Begum, now 20, was stripped of her citizenship in 2019 on security grounds after she was found in a detention camp for suspected IS members.

Last month, however, a judge ruled that Begum should be allowed to return to the United Kingdom to contest the stripping of her citizenship.

The UK and citizenship-stripping powers

The UK has been described by researchers as a “global leader in using citizenship deprivation as a counterterrorism measure”.

Citizenship-stripping powers targeted at naturalised citizens on disloyalty grounds had largely fallen into disuse prior to 2002, when the government introduced new powers in an attempt to revoke the citizenship of Abu Hamza, an Egypt-born cleric subsequently convicted of terrorism in the US.

The 2002 legislation allowed British-born nationals as well as naturalised citizens to lose their nationality rights, and successive governments have gradually broadened the scope of the powers so that home secretaries can now deprive anyone of citizenship if they are satisfied that doing so is “conducive to the public good” and would not leave an individual stateless.

No criminal conviction is required. Letters often state that individuals are assessed to present “a risk to the national security of the United Kingdom”.

The government’s use of the powers has surged to unprecedented levels in response to the perceived threat posed by British nationals returning from Syria.

Some subjects of citizenship-stripping orders argue that they have been left effectively stateless, because the government bases its assessment that they are dual nationals on a right of citizenship to a parent’s country of birth, even if they have never taken up that citizenship or even visited the country.

Human rights organisations and lawyers have compared the powers to “medieval exile and banishment”. Critics also point out that the powers create a two-tier system in which only those deemed to be dual nationals are at risk of losing their British citizenship; a measure that discriminates against naturalised citizens, immigrants and their children.

Lawyers and human rights campaigners say that the ruling could have implications for others targeted by citizenship revocation orders, many of whom have appeals pending but are unable to return to the UK.

Gretta Schumacher, senior legal and policy officer at the Rights and Security International campaign group told Middle East Eye last month that there were up to 20 British women and children stranded in refugee camps in similar circumstances.

Schumacher said the UK government had engaged in an aggressive policy of depriving them of citizenship, even in circumstances in which they were effectively rendered stateless.

Citizenship-stripping powers have been widely used against British nationals who travelled to Syria since the start of the country’s civil war in 2011 amid concerns about the threat posed by returnees.