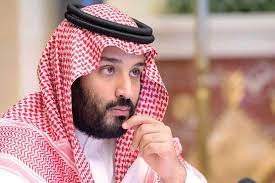 Crown Prince Mohammed Bin Salman’s aggressive drive to oust Islam from Saudi Arabia’s political and social sphere is gaining momentum. But his reforms are about more than just the “threat” of Islamic influences.

Before the start of Ramadan, the Saudi Ministry of Islamic Affairs published a set of rules that mosques throughout the kingdom are expected to abide by during the holy month. Among those rules appeared a directive in which mosques are “forbidden from broadcasting prayers on all media outlets, in all forms” and that “supplications are to be kept short.”

Mosques in are “forbidden from broadcasting prayers on all media outlets, in all forms.”

Traditionally during Ramadan, Saudi media have regularly broadcast prayers from the Two Holy Mosques, which are watched by millions around the world as part of the Ramadan spirit. The time differences across the globe often mean that the prayers are watched after the breaking of the fast or just before it. Anecdotes abound of Muslims being moved to tears by the impassioned supplications made by the Head of Mecca’s Masjid al-Haram Sheikh Abdurrahman Al-Sudais.

The announcement on the ministry’s website, however, did not permit any exemptions, leading to confusion as to whether the Two Holy Mosques are included in the ban. The management office of the Two Holy Mosques was also notably silent, despite rapidly mounting public uproar and backlash on social media.

While online some Saudis have argued that the directive covers broadcasts on social media, critics point to the language of the announcement on the website which used the Arabic term for “media outlets” [وسائل الإعلامية], instead of “social media” [مواقع التواصل الإجتماعي]. The suggestion that the ban applies only to social media poses the question as to why the government wishes to prohibit broadcasting prayers on social media, which has previously inspired many to attend them. Streaming the prayers online has also brought new Islamic influencers to the attention of the Muslim world.

The late Sheikh Muhammad Ayyub and Sheikh Ali Ibn Abdul-Rahman Al-Hudhaify, both imams who became synonymous with the Holy Mosque in Medina, used to lead the prayers in the Quba Mosque. Al-Sudais himself is believed to have been “discovered” while reciting prayers during Ramadan in the Saudi capital of Riyadh. Under Saudi Crown Prince Mohamed Bin Salman’s edict, however, the broadcast of these cantors would be banned.

Many also remark similarities to Bin Salman’s ban last year on the use of loudspeakers at mosques during prayers. Last year’s announcement was also vague and caused confusion over Friday prayers. An exemption was announced only after the directive received wide backlash by Saudis, on the following Friday. Mosque attendees complained of being unable to hear the sermon or follow the imam in his prayers at the Two Holy Mosques. Yet, while an exemption was made for that Friday, Bin Salman retained the ban for all other mosques.

In other words, the exemption indicates that Bin Salman was testing the waters in the hope of also banning the broadcast of the Two Holy Mosques and had worded the statement vaguely so as to allow himself to backtrack with an exemption for the two principal mosques while keeping the wider ban on all the other mosques.

Bin Salman’s “de-Islamization” apparent in a series of initiatives that he has taken on since coming to power.

Bin Salman’s “de-Islamization” is not only evident in the kingdom’s restricting the broadcast of Ramadan supplications and banning mosques from using loudspeakers for prayers. Instead, it is apparent in a series of initiatives that Bin Salman has taken on since coming to power which appear to be driven by a desire to aggressively drive Islam out of Saudi Arabia’s political and social spheres and redefine the Saudi identity as a uniquely nationalist concept devoid of the religious fervour that has been the hallmark of its existence over the last 90 years.

Since becoming crown prince in 2017, Bin Salman has sought to invite immodest performers to hold concerts and forcibly break taboos in the kingdom. The General Entertainment Authority, led by Bin Salman’s closest confidante – and ironically the descendent of the founder of the Wahhabi trend – Turki Al-Sheikh, invited Nicki Minaj and Mariah Carey to perform in the kingdom back in 2019. David Guetta and Pitbull were invited to hold “giant raves” in the desert in 2021.  Jeddah has recently opened its first bikini beach, and the government has begun to push for establishing an official nightclub culture.

The Ministry of Education has altered the curriculum to significantly reduce the hours that are spent on the study of Islam, the Quran, and the Arabic language, in favour of subjects that Bin Salman believes (ironically perhaps) are more associated with “critical thinking.”

Saudi Arabia has also sought to host high profile sports events in order to present the image of a kingdom that is “opening up.” These events include hosting the Formula 1 Grand Prix, international golf tournaments, WWE wrestling, and more.

This year, Bin Salman announced a new national holiday to celebrate the founding of the kingdom. However, instead of recognizing 1744 as the year in which the first Saudi kingdom was founded – which is agreed upon by historians including William Facey – Bin Salman adopted the date of 1727, attributing the founding of the kingdom to before the appearance of the Muslim cleric Mohamed Bin Abdel-Wahab, whose alliance with the then-administrator of the small area of Dir’iyyah just outside Riyadh would go on to transform the Arabian Peninsula.

In other words, the crown prince has altered history to erase the central religious role of Abdel-Wahhab and assert that the establishment of the kingdom was a uniquely nationalist endeavour by his ancestor Mohamed Al-Saud. Moreover, the emblem that Bin Salman has chosen to commemorate the founding incorporates no reference to Islam. Even the government infographic explaining the emblem presents a picture of the historical capital of Diriyyah that is devoid of any Islamic minarets.

The controversy caused by the Ministry of Islamic Affairs’ rules for Ramadan use of the words “media outlets” instead of “social media” raises suspicions that the intent behind the announcement was a tentative bid to silence the Two Holy Mosques. While the attempt failed, the kingdom is still committed to restricting the influence of Islam to the two provinces of Mecca and Medina by banning all other mosques from broadcasting.

Following the belated announcement of an exemption for the Two Holy Mosques, the government proceeded to reiterate its ban on the use of loudspeakers for all other mosques, quashing suggestions that it would make an exemption for the holy month and upholding the essence of the original ban.

The reforms that Bin Salman is implementing appear exclusively in the form of general entertainment.

Yet, the issue at hand is more than just the attempts at de-Islamizing Saudi Arabia. The reforms that Bin Salman is implementing appear exclusively in the form of concerts, bikini beaches, raves, and general entertainment. There is no suggestion of any reforms with regards to basic rights, freedoms, civil engagement, political access, democratic process, and institutional reform. While Bin Salman is portraying his concerts as evidence of the kingdom “opening up,” the space for political engagement and civil rights is being brutally shut down. Swathes of critics have been placed in prison without due process. Media freedoms are the most restrictive they have ever been. Political prisoners have reportedly been subjected to torture. Political rivals have been arbitrarily imprisoned, mass executions are commonplace, and journalists have been disappeared. These abuses have not been limited to Islamic influences, but have been deliberately pursued across the political spectrum to quell critical thinking and dissent in the kingdom.

In other words, the “reforms” are not about freeing Saudis to pursue their hopes and dreams, but rather about “entertaining” the Saudi population into apathetic submission. The reforms are not about the promotion of individual rights of Saudis under a new identity, but about encouraging Saudis to dance themselves into a hedonistic daze that allows Bin Salman to tighten the chains on their rights without consequence and eliminate the last remaining checks on his almost absolute authority. The concerts and raves are not an “opening up,” but a “redecoration” of the political prison that Bin Salman has imposed and seeks to reinforce.

The reforms about “entertaining” the Saudi population into apathetic submission.

This is not to suggest that Saudi Arabia was ideal before the advent of Bin Salman. The strict interpretation of Islam in the kingdom has been the subject of endless criticism across the Muslim world, particularly when it comes to the rights of women. However, what Bin Salman seeks is not reform of the strict interpretations that many Muslims believe are inconsistent with the Quran and the teachings of the Prophet Muhammad. Nor does he seek the liberation of women from these strict influences.

Instead, Bin Salman seeks to chain the most potent influence in the kingdom and the region and confine it to the two provinces of Mecca and Medina. Domestically, he is marketing this through raves and the mighty General Entertainment Authority, banning the use of loudspeakers for mosques while at the same time amplifying the volume of concerts and raves. And internationally, he is marketing it as a war on extremism and progress towards separation of religion and state. On both fronts, Bin Salman appears to be gaining momentum.

The article first appeared on Inside Arabia

The Making of an ‘Abraham’s Middle East NATO’