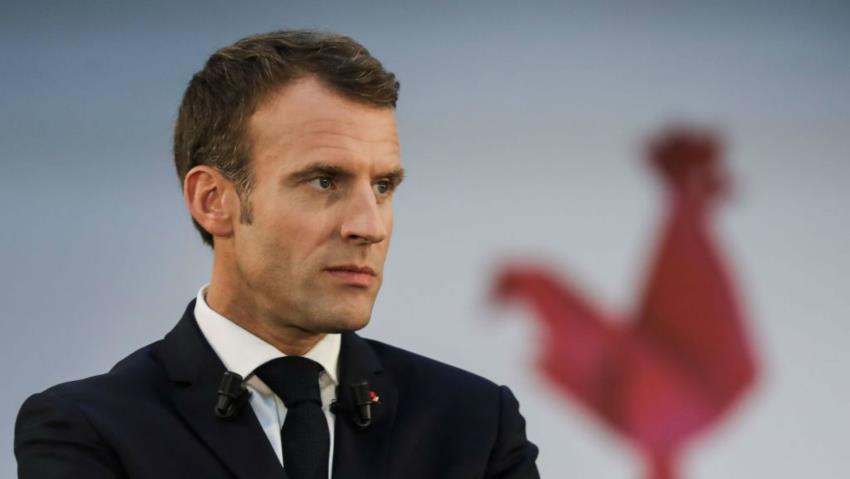 In his speech, Macron vowed to fight against ‘Islamist separatism’ [Getty]

Mr Macron began his speech by portraying the French Republic as something of a miracle entity, under siege by anti-secular, anti-freedom of religion, anti-freedom of speech, anti-public order people. Barely a few minutes into the two-hour sermon, Macron said he did not intend to target all Muslims, but what came next told a very different story.

Macron’s speech followed the same steps as any other anti-Muslim speech by a European policymaker. To prove a point about the French Republic being under attack, he invoked boogeyman stories of Muslims asking for special treatment, threatening others and imposing their beliefs, and turned them into a national challenge. Just like the burqa was manipulated into a national threat, despite domestic intelligence stating that only 364 women in France actually wore it.

If voted on by the National Assembly, ratified by the Senate and validated by the Constitutional Council, the key measures in Macron’s bill – to be formally presented in December – would spell the end of the right to free assembly, and would pave the path to prosecuting any individual or organisation accused of being “separatist” or of having a “separatist ideology”.

More importantly, while Macron says the “radical law” is intended to strengthen France’s time-honoured concept of “laïcité” – the idea of a secular French state, it would in fact do the opposite, and allow state intervention in matters of religion, effectively sealing the official death of “laïcité”.

For Macron, this means giving the state the capacity to intervene in Islamic affairs – pressuring Islamic organisations to change their statuses, nominating people to the boards of religious organisations, intervening in hajj affairs and to even promoting his own brand of “French Islam”. Given all this, how different, one might wonder, is Macron’s secular Republic, from an Islamic one?

In fact, the same people who claim to uphold and protect the French Republic’s treasured laïcité, are the very ones who have been blatantly violating it for decades, by constantly interfering in religious affairs.

The French Council of the Muslim Faith (CFCM), which was setup in 2002 by Nicolas Sarkozy while he was Minister of Interior of the secular French Republic has been an empty shell since its foundation. It has only made a name for itself for having no grounding in local French Muslim communities, for having never held free and fair elections, and for having no women on board, let alone at its head.

Yet, this is the organisation Emmanuel Macron has asked to be the contractor of the management of Muslim affairs, just as his colonial ancestors once had their “Caïds” in Algeria.

And in an explicit public acknowledgement that the current stewards of the state’s management of Muslims will be under threat from their base, Macron warned that the state – through its officials, would be able “to intervene in case incumbent boards in Muslim associations are overthrown”. Knowing  how dysfunctional many mosques are because of their links with local and national politicians, Macron is aware that his measures against so-called “Islamic separatism” will further weaken the current religious establishment that only seeks to be on the good side of policymakers, not their own community.

The official burial of laïcité will be complemented by 10 million euros in order to promote an “enlightened Islam” instead. I, for one, still struggle with the high esteem that Europeans have for the Enlightenment, an age that failed to prevent slavery, colonisation and the massacre of millions.

As for Macron’s claim that “Islam is in crisis everywhere”, just a brief glance at the news is enough to see that Islam and Muslims are being bombed, occupied, held captive, exploited and humiliated everywhere, by powers like France, Xi Jinpin’s China, and Modi’s India.

Eighteen months before the next presidential elections, Emmanuel Macron knows he has got nothing to show to voters. After having been elected in a nearly fraudulent way – only 44 percent of the people voted for him -, his economic policies led to the Yellow Vest movement, his mandate has been marked by multiple affairs of corruption targeting members of his cabinet.

Not only that, but there have been multiple resignations, and Interior Minister Gerald Darmanin is being investigated for rape. After overseeing systemic police brutality, and the catastrophic management of the Covid-19 pandemic that has prompted nearly 200,000 people to press charges, Macron now has the gall to pose as the best choice we have for the future.

The French president is accusing French people who happen to be both critical of France’s vision for itself, and Muslim, of being radical separatists. But to any candid observer of civil society, including myself, the idea of Muslims calling for “separation” from France is entirely unfounded. Nevertheless, in the eyes of Macron a non-white seeking equality is questioning the status quo, and can therefore only be labeled as hostile.

In reality, the only people who can be correctly accused of separatism, are Macron’s billionaire friends like Bernard Arnaud or Xavier Niel who brought him to power, who are the only ones to praise him and who are part of a tax evasion scheme that costs us all nearly 100 billion euros per year.

And if class separatism does not ring a bell for Emmanuel Macron, maybe race separatism by white supremacists will. The year 2019 was marked by a series of thwarted far-right terrorist attacks that were being set up to assassinate Muslim clerics and poison halal food in grocery stores. Some of the people behind those plans were members of the French police or military, in other words, people trained to engage in organised political violence. But on them, the president remained curiously silent.

Macron is a failed president on several counts: Because of his policies, but also because he lacks the moral authority his position requires. Instead, he calls on Islamodiversion, or exploiting Islamophobia to distract from economic problems and his rule of incompetence, by creating a Muslim focused controversy in order to escape public scrutiny. Unfortunately, millions of French people are receptive to such rhetoric, and decision makers and media pundits continuously feed the destructive “enemy within” narrative.

Since their silence has not paid off, and since their conditions have worsened as much as those of their non-Muslim fellow countrymen, perhaps it is time for France’s Muslims to rise up and join the millions who are also fed up with the Fifth Republic that was set up by and for the bourgeois class, with white supremacy as its glue.

The future of France will only be as gloomy as the majority of French people allow it to be. The crumbling Fifth Republic is bound to face collapse, and as the recent demonstrations have shown, it is not far-fetched to see something positive for the majority rise out of their shared anger towards a ruthless ruling minority.

But while there are reasons to be hopeful, such solidarity relies on the oppressed minority standing and organising against oppression, and for the silent majority – one that feels safe as long as Muslims are losing their rights – to realise that could just as easily be next. And that it is not a question of if, but when.

India needs a political leader not a messiah or a maharishi