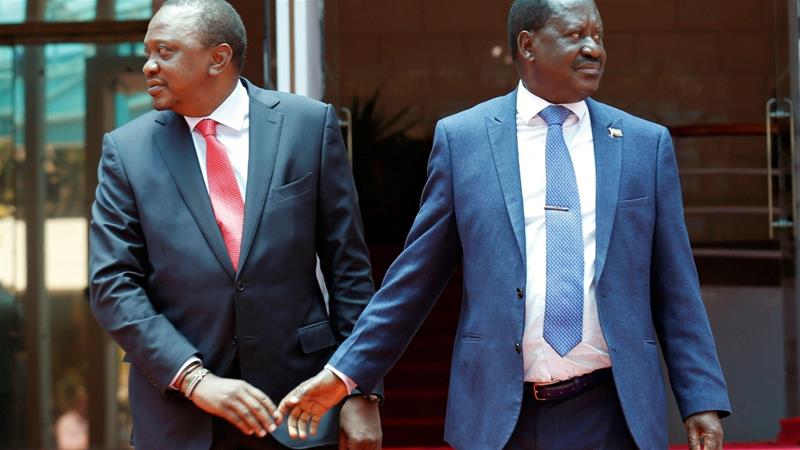 The initiative assumes our problems can be cured by letting the political class dictate how history is to be told.

The much-anticipated report of the Building Bridges Initiative was launched on Wednesday to great pomp and circumstance in the Kenyan capital. The initiative – the brainchild of President Uhuru Kenyatta and opposition leader, Raila Odinga – was conceived nearly three years ago in the famous “Handshake” agreement that ended months of post-election violence and confrontations that had seen dozens killed by the police.

The BBI was tasked with inquiring into and making recommendations about nine areas that Kenyatta and Odinga had decided were crucial to the effort to “create a united nation for all Kenyans living today, and all future generations”.

The report has come up with a wide-ranging series of recommendations, including restructuring government to re-introduce a hybrid system of government featuring shared power between a president and a prime minister with members of Kenya’s Parliament now allowed to become part of the Cabinet. Election losers have been tossed a bone with the runner-up in the presidential elections automatically gaining a seat in Parliament as leader of the official opposition.

Kenyans would be forgiven if they thought this was deja vu. We have been here before. In early 2008, in the aftermath of another presidential election gone wrong and sparking widespread bloodletting, then-President Mwai Kibaki and his rival, Odinga, shook hands on what came to be known as the Kenya National Dialogue and Reconciliation (KNDR) agreement. The Agreement had four parts. The first three were about overcoming the immediate crisis, ending the violence, dealing with the humanitarian crisis it had occasioned and dealing with the political crisis occasioned by the electoral crisis.

So why, a decade later, did Kenyan politicians go back to the drawing board? The simple answer is they did not like what history told them about the sources of the country’s problems, so they decided it would be easier to rewrite history rather than deal with it.

Under Agenda item 4, the KNDR had established the Truth, Justice and Reconciliation Commission to look into the sorry history of human rights and economic abuses by the government from independence in December 1963 to February 2008. It was tasked with recommending actions, including prosecutions and conditional amnesty to deal with perpetrators as well as means of redress for victims, including non-retributive truth-telling. It was also to recommend policies to ensure the abuses did not recur.

It presented its report to President Kenyatta in May 2013, recommending investigations as well as prosecutions of over 400 politicians and government officials. For obvious reasons, the law originally gave Parliament no role in influencing its implementation, which had strict deadlines. However, 6 months after its publication, the National Assembly amended the Act to give itself the power to, in the infamous words of the leader of the majority in the National Assembly, Aden Duale, “improve” the report, with the effect that not only could inconvenient history be erased, but also implementation became hostage to Parliament’s whim. Six years later, the Assembly is yet to debate the report.

It is within this context that the BBI report must be understood. Despite both the BBI and the TJRC claiming to be about fixing root causes, in reality only one was. Unlike the TJRC, the BBI was hostage to the political purposes of Kenyatta and Odinga and took its cue from them from the very beginning. It thus represents an attempt by them to hijack and frame the national conversation around the reasons for the country’s problems.

The TJRC report, which runs into four volumes, declares that “the violence generated in the context of colonialism was perpetuated in the postcolonial period through unaltered colonial structures, institutions and mentalities. Thus Kenya’s relatively long history of human rights violations cannot be explained nor understood adequately without unravelling the country’s colonial experience”. It traces this colonial history back to the Berlin Conference which was 135 years ago today and is clear that it is the Kenyan state and those who run it that are to blame for the hardships Kenyans experience today.

On the other hand, while the 156-page BBI report also acknowledges the disruption caused by the colonial experience and the problematic colonial roots of the Kenyan system of government, it points the finger at Kenyans. They are damaged goods – a “responsibility-light and rights-heavy society”. Kenyans “seem to know only how to oppose, whether it is colonialism or other ethnic groups” and “have a noticeable and destructive inclination to disrespect the law”.

Kenya, in the report’s estimation, is a land, not just of dysfunctional government, but also of dysfunctional people. The state may be colonial and predatory but it is the people it steals from who lack a sense of what ethical behaviour is. They apparently do not even know how to parent their children.

In truth, the BBI is regurgitating a narrative that has little basis in fact. It is, rather, an exercise in blaming Kenyans for their immiseration in order to erase demands for accountability. It is the voice of a political elite that long ago sold out its people. Even its recommendation for the writing of “an official and inclusive national history” must be seen in the light of Kenyatta’s attempts to purge the TJRC report of unfavourable references to his father, the first president of the country.

Kenyans and the rest of the people on the African continent should by now have realized the terrible price of being cavalier with the past. The BBI assumes our problems can be cured by letting the political class dictate how history is to be told.

It won’t be long before Kenyans – painfully – discover just how mistaken that is.