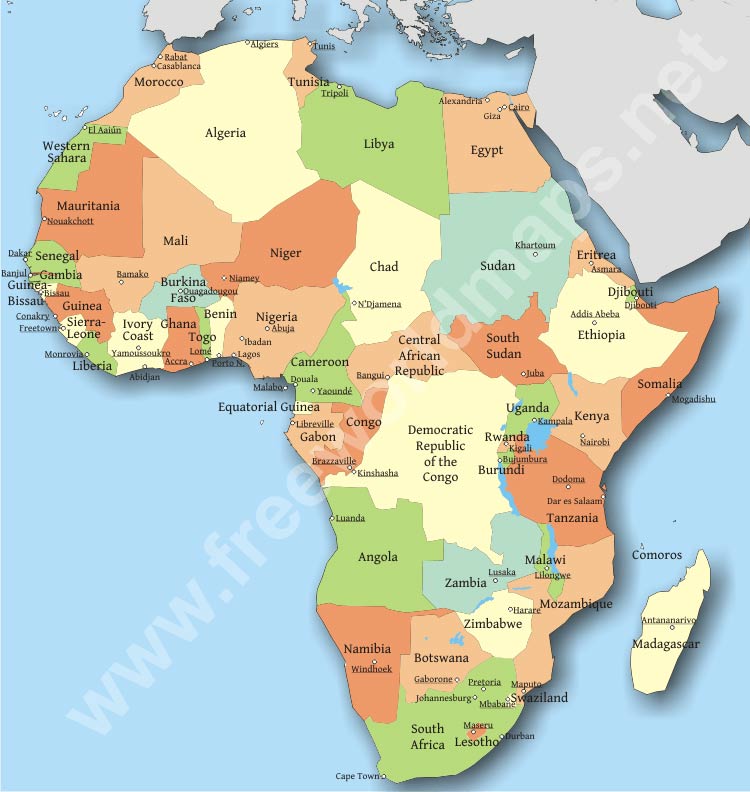 What we know so far is that the coronavirus severely affects the elderly but Africa has a younger population than Europe. This is reassuring for the continent despite its high mortality rates. 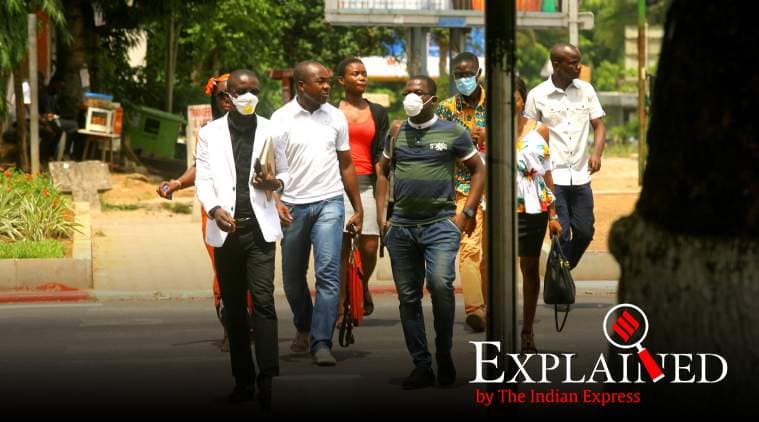 Coronavirus in Africa: Residents of Abidjan, Ivory coast, wear masks to protect themselves from the coronavirus as they walk along a street. (AP Photo: Diomande Ble Blonde)As the coronavirus outbreak continues to spread around the world, the African continent seems to be less-affected at the moment compared to other parts of the world.

The coronavirus outbreak, which appeared in China in late December, had spread to parts of Asia, Europe, the Middle East and the US much before Africa recorded its first case only on February 14, 2020 in Egypt. COVID-19 did not reach sub-Saharan Africa until March 9, when the first case was identified in Burkina Faso. But since then, the numbers are rising quickly.

Although the virus has not yet hit the African continent as hard as other parts of the world, it is only a matter of time that the cases may just shoot up because of the continent’s close commercial links with Beijing and Europe coupled with the generally weak healthcare systems of the countries. People across the continent are worried if they will see a repeat of the chaos associated with the 2014 – 2016 Ebola outbreak.

What can be the reason behind the relatively low number of recorded COVID-19 cases in Africa?

Like other parts of the world, coronavirus was introduced to Africa by travelers from other continents, notably Europe. All of South Africa’s first 62 cases were from abroad, according to the health ministry.

It is likely that cases are going undetected if local transmission of the virus has already begun. Recently, a cruise ship was quarantined off Cape Town after after six passengers shared a flight from Istanbul with a cargo ship worker and a colleague who had virus symptoms. The cargo ship also is being held outside port limits.

The dozen countries with local virus transmission, according to a new update by the Africa Centers for Disease Control, include Algeria, Burkina Faso, Egypt, Morocco and Senegal, some of the nations with the most cases on the continent.

While WHO’s regional chief Dr Matshidiso Moeti does not believe large numbers of infected people are going undetected, he acknowledged a shortage of testing kits. As many as 43 countries in Africa now have testing capability, up from two when the outbreak began. 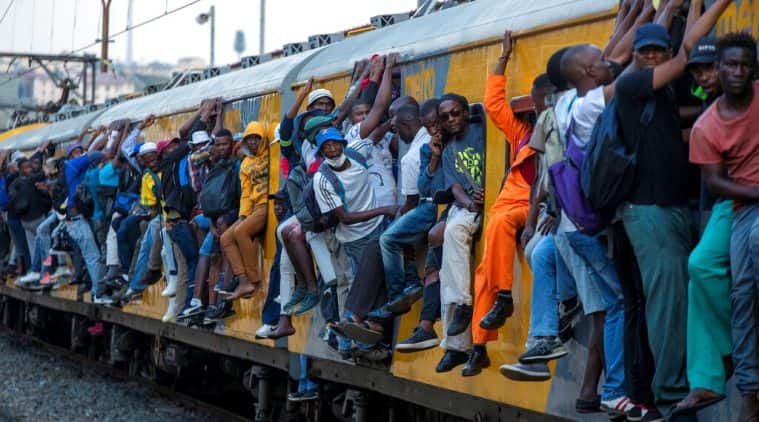 Train commuters hold on to the side of an overcrowded passenger train in Soweto, South Africa, Monday, March 16, 2020. (AP Photo: Themba Hadebe)

What are the measures taken by African nations to contain the spread of coronavirus?

Many of the African nations have shut borders and banned large gatherings in the hope of avoiding the scenes in wealthier countries such as Italy and the US. On Thursday, Senegal closed its airspace. Angola and Cameroon shut air, land and sea borders. Rwanda blocked all commercial flights for a month. The island nation of Mauritius closed its border after announcing its first case.

Out of 54 countries, South Africa is the most -affected with 202 confirmed cases as of Friday. According to Al Jazeera, authorities in South Africa will build a 40km fence along its border with Zimbabwe to prevent undocumented migrants from entering and spreading the coronavirus. However, Zimbabwe has no confirmed case till now. South Africa also said all places that sell alcohol for drinking on site must close from 6 pm to 9 am.

Africa’s most populous country, Nigeria, announced restrictions on the entry of travellers from 13 countries including China and US. It has also suspended visas on arrival for their citizens. The number of cases stand at 8 in Nigeria.

After reporting its first case Monday, Somalia closed schools and universities for two weeks and warned against public gatherings to stop the spread of the virus. The Somali government has announced suspension of all international flights arriving or leaving the country for two weeks.

Kenya announced that Saturday would be a day of prayer in response to the virus — but urged people to do so at home. Within a week, the number of cases in Kenya rose to seven by Wednesday 18 March. Meanwhile, Senegal is helping to develop a fast COVID-19 test that is expected in June. Coronavirus in Africa: A man wearing a surgical mask and gloves to protect himself from the coronavirus, walks on a street in Soweto, South Africa, Thursday, March 19, 2020. (AP Photo: Themba Hadebe)

What are the major challenges which Africa will face in the coming days? Is Africa ready to face the pandemic?

Africa is seeing an “extremely rapid evolution,” Dr Moeti told AP. According to him, the lack of ICU facilities and ventilators is one of the major challenges facing the continent. To give some context, AP reported that the West African nation of Mali has roughly one ventilator per 1 million people — 20 in all to help the critically ill with respiratory failure.

“Many countries in sub-Saharan Africa do not have the isolation wards or large number of health care workers to respond to a surge of COVID-19 patients,” Dr. Ngozi Erondu was quoted as saying by AP.

Africa has to remain cautious and wait to see if the number of cases will explode, as is currently the case in Italy and other European countries. What we know so far is that the virus severely affects the elderly but Africa has a younger population than Europe. This is reassuring for the continent despite its high mortality rates.

Overall, there are many shortfalls in terms of infrastructure in Africa, be it in terms of isolation rooms, treatment protocols or medicine stocks. The ability to detect the first cases is essential, indeed key, and it’s known to be difficult because most patients are asymptomatic or have very mild symptoms. Also, with such limited resources, identifying cases, tracing and testing is very important for the African continent.

Originally published in The Indian Express