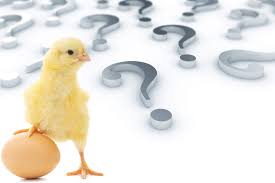 CHICKEN OR THE EGG?

A. Belief in Creation postulates what looks like a simple story: yesterday there was nothing, today there is a world, and since worlds do not come into being out of the blue there must have been a Creator who made the world exist.

But what about those things that have the capacity to grow, develop and generate other things?

In other words, which came first, the chicken or the egg?

Did God create Adam and Eve as fully-fledged reproductive beings, or was it foetuses or babies that He created, with the capacity to grow and become reproductive adults?

Maybe the 20th-century figure of Superman is an endeavour to tackle the question, in that Superman began as Superboy and then grew up – but Superboy actually had parents in the world from which he came, but if Adam had parents too, then Adam was not Adam but his father was!

There is a passage in Pir’kei Avot chapter 5, with other versions in Pesachim 54a and elsewhere, which speaks of ten miraculous things created at twilight on the first Sabbath eve. To the list is appended the statement, “Some say, also the tongs made with tongs”.

Which came first – the tongs (symbolic of instruments and tools)… or the tongs that made the tongs?

The general rabbinic answer is that there had to be a first step, a first set of tongs, and these were the work of the Creator.

The sages aver that Adam was created as a mature reproductive being, 20 years of age (Gen. R. 14:7), and the other creations also came into being fully developed: “All the works of creation were brought into being in a completed state” (Num. R. 12:8; see also RH 11a and Chullin 60a). There is a similar view found in Greek and Roman literature.

So which came first, the chicken or the egg?

Judaism is sure it was the chicken.

Q. The Torah says that man’s heart is evil from childhood on. Does this mean that everyone is an innate sinner?

A. The Torah is not saying that at all, even though classical Christianity thought it did.

The words “yetzer” and “min’ur’av” are crucial and must be understood correctly.

Neither is automatically dominant, and it is the glory of man that he has the capacity to choose between them, to make his own moral decisions, to direct his actions. Even the so-called “evil” inclination can be tamed and used for good purposes.

The word “min’ur’av” is read by Rashi as “min’ar’av”, “from the time he stirs”, which confirms that this dual capacity exists from one’s earliest moments, and the Midrash suggests that it applies even when the unborn child moves in the womb.

Ramban (Nachmanides) sees the initial letter of “min’ur’av” not so much as “from” but “by reason of”, which places the verse in the context of the moral development of man.

Hence the Torah is saying that it is temporary moral immaturity that is the problem.

Rabbi Raymond Apple served for 32 years as the chief minister of the Great Synagogue, Sydney, Australia’s oldest and most prestigious congregation. He is now retired and lives in Jerusalem where he answers interesting questions.