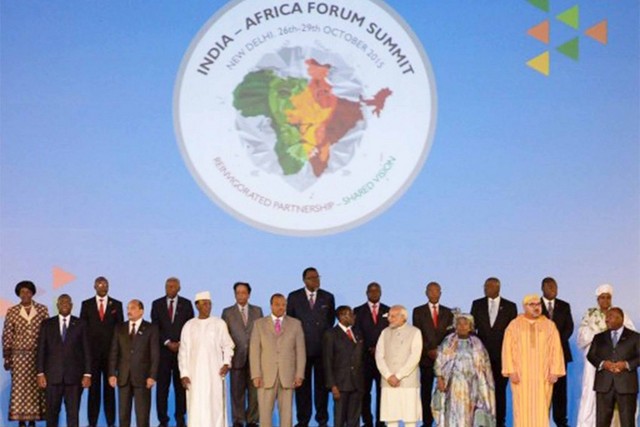 The third India-Africa Forum Summit in 2015.

Amid a growing rivalry with China, how can India set its African engagement strategy apart?

The multidimensional rivalry between India and China looks set to grow more acute following the death of 20 Indian soldiers in a border skirmish with Chinese forces. Africa, as a continent of increasing importance to both China and India, stands to see another manifestation of this competition. What is India’s end goal in Africa, what are its primary methods and conduits, and how likely is it that it can achieve the same level of influence as China?

India is now Africa’s third largest trading partner, accounting for 6.4 percent of African total trade for a total value of $62.6 billion in 2017-18. By comparison, China, having surpassed the United States, is Africa’s largest trading partner; the value of Chinese-African trade in 2018 was $185 billion. Chinese overseas investment in Africa, in all sectors, as of 2020, totalled $147.66 billion. India cannot hope to compete dollar-for-dollar with Chinese spending power.

However, India can compete with China in two ways. First, it can work to enable greater African agency, while pursuing its interests, and, second, India can pursue greater engagement with its long-established and well-integrated diaspora community in Africa. This can enable India to chart its own course between the United States, the European Union, and China, in Africa.

India and Africa have been historically connected during different eras through culture, economics, and politics. The roots of India’s engagements with Africa in the historical context were focused on the continent’s eastern coast, especially around the Horn of Africa.

Indian diaspora populations in the African continent, while predating British rule, were greatly increased as a result of forced indentured servitude, especially in South Africa. These were the two vectors on which Indian policy toward Africa was initially based.

The Bandung Conference in 1955, in Bandung, Indonesia, acted as the first Afro-Asian meeting of nations. Both the People’s Republic of China and India attended, with Indian Prime Minister Jawaharlal Nehru a key organizer. The Conference would give rise to the Non-Aligned Movement (NAM), and lay the foundations for subsequent South-South cooperation.  This would launch India into its initial engagement with Africa.

India’s Africa policy was solidified, however, under the current government of Narendra Modi. As India seeks to raise its global profile, Africa is both a conduit and an outlet for its aims. With the 2019 re-election of Narendra Modi, his government actively sought to promote India as a leading power, as opposed to being simply “influential.”

Much of India’s narrative, as it relates to engagement with Africa, has focused on “capacity-building.” This seems a key tenet for the Modi government’s engagement strategy with Africa: building local capacity to increase leverage and agency among African nations, to be largely directed against Chinese interests.

To this end, Modi’s government established 18 new diplomatic missions throughout Africa in March 2018. Africa emerged as a key geographical area that merited Indian expansion and attention. This was clearly evident when Modi undertook a three-country tour of Africa in July 2018, including the first visit by an Indian prime minister to Rwanda.

The Modi government’s intent toward Africa was signalled through the third India-Africa Forum Summit, in 2015, with 40 African heads of state in attendance. The fourth, scheduled for September of this year, given present circumstances, will most likely be digital, if held at all.

COVID-19 of course, has temporarily disrupted growth in Africa and India, much as it has across the globe. Nevertheless, Modi’s government, unlike its predecessors, appears to have a coherent African strategy – one that, for now at least, remains a key priority for Modi. This strategy was elucidated by Modi’s July 2018 address to the Ugandan Parliament.

In this address, Modi outlines 10 guiding principles of Indian engagement in Africa. These principles are multidimensional, and favor working multilaterally with individual African countries. They can be grouped into categories of trade, investment, climate change, security/terrorism, digitalization, agriculture, and aid/development. All of this, according to Modi, is to be done with “African priorities” in mind. Modi also stated that India was looking to “liberate” Africa’s potential, by creating local opportunities to enable such an end.

The claim to be working in conjunction with “African priorities” can be potentially misleading. Africa, after all, is a continent made up of 54 nations, each either their own, sometimes competing, “priorities.” A pan-African focus must be unpacked to the most micro of levels to take local contexts into consideration.

The ambitious India-Japan-Africa Growth Corridor (IJAGC), a developmental project conceived through converging Indian and Japanese interests, aims to achieve closer developmental cooperation with Africa. This proposed project represents a joint Indo-Japanese effort aimed at building infrastructure in Africa. This endeavor is meant to be complemented with digital connectivity across Africa. The IJAGC is envisioned as a maritime corridor, built on (pre)existing routes with India, combining Indian soft power in Africa with Japanese financial backing. It will be perhaps India’s largest undertaking in Africa, as well as a bold move at counteracting Chinese influence in the continent. The Chinese Belt and Road Initiative (BRI), which also extends to Africa, is not recognized by India.

But capacity building alone will not suffice. Compared to China’s use of financial and military aid, India has, for the most part, been losing out. India will need to present a more energetic strategy, especially to Indian companies seeking to expand in Africa.

To facilitate this, the Modi government has undertaken a multidimensional approach to engage Africa. Among its first concrete step was the establishment of a line of credit to African nations, as a form of development cooperation.

In 2019, India had granted 279 lines of credit worth $28 billion globally. This is in addition to Indian lines of credit in Africa totalling $10 billion, for development purposes, in 2017. This is a huge increase from previous governments, which did not prioritize Africa. In the same year, India further announced a grant of $600 million to be spread over the period of the third India-Africa Summit, until 2020. By 2020, Indian lines of credit totaling $11 billion had been extended to 41 African countries. This makes Africa India’s largest regional destination of overseas aid. (Bhutan, Mauritius, and Nepal are the main recipients of Indian overseas aid.)

Indian aid has also been augmented with digital initiatives focusing on education and medicine. The e-Vidya Bharati and the e-Aarogya Bharati initiatives focus on awarding 15,000 scholarships to African students from its inception in 2019 through to 2024. Playing to India’s strengths as a former colonial nation, such soft power initiatives can foster much goodwill and influence among both present and future African elites.

Yet for all its humanitarian presence in the region, India’s primary objective in Africa is business, which then correlates into a greater global profile, as well as security. India’s increasing need for resources as a growing economy, especially in the energy sector, means that the procurement of African crude oil was a deciding factor in Indian engagement. It is through its business interests, that India could make greater use of its diaspora community in Africa, to facilitate not just goodwill but also entry points.

Here, however, the Modi government would do well to not narrow the definition of who is an Indian, being strictly associated with Hinduism. By taking a broader definition of who is an Indian, the Modi government could potentially push capacity-building in Africa, in conjunction with its diaspora communities, which would go a long way in pushing Indian soft power.

South Africa alone, as of 2015, was home to an estimated 1.3 million people of Indian descent. India’s diaspora in Africa is overall more assimilated than the Chinese, largely because Chinese emigration is a more recent phenomenon.

Among the most high-profile members of the Indian diaspora in Africa is Mohammad Dewji of Tanzania. The businessman whose net worth is around $1.6 billion, also served two terms in Tanzania’s National Assembly, and could be a powerful facilitator of Indian diplomacy in his home country.

India is a partner whom the United States and the European Union would be more comfortable with in Africa. The ramifications of Chinese-Indian rivalry, in light of the deaths in Ladakh, are far-reaching. It can spell the end of the notion that economic interdependence correlates to less political tensions. This sombre tone would also most likely color the fourth annual India-Africa Forum Summit, if held, as well as future Chinese-Indian interactions. What this tension holds for Africa remains to be seen.

Christian Kurzydlowski is currently working as an independent geopolitical researcher and holds a Ph.D. in History from the University of London.

The article first appeared on The Diplomat Magazine