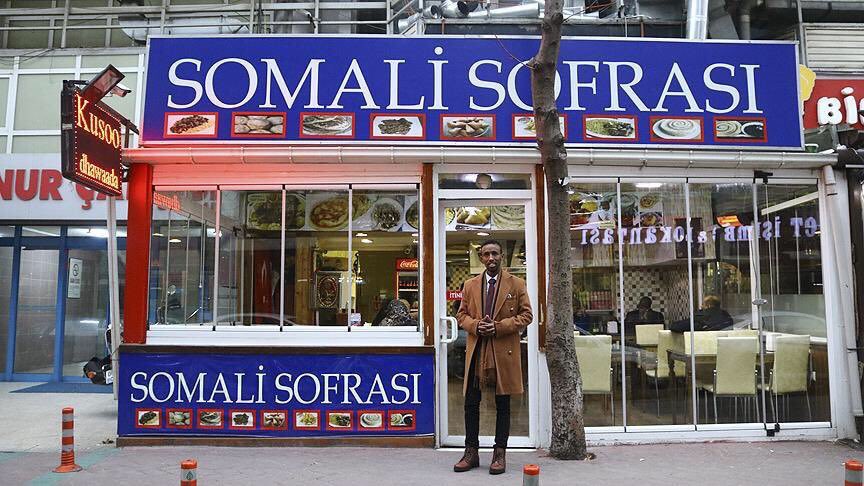 “But for Somalians, we couldn’t have done business, either,” says one shopkeeper: “We also benefit from the customers who come for them.”

We talk to the shopkeepers in Ankara about recent racist attack on the shops and stores of Somalians. They condemn the incident.

There are a total of 28 businesses owned by Somalians in Keçiören and Sümer 1 and 2 streets. The majority of them are restaurants, hairdresser shops and boutiques. They have prepared their signboards in their own languages. The shops are embellished with ornaments with African motifs. After 1990, Somalians had to emigrate in large groups due to the war. The vast majority of the ones who have come to Turkey came there from Syria.

Farhan Sakawudin Mohamed, the owner of Afrika Sofrası (The Cuisine of Africa), which was targeted in the attacks, has been living in Turkey for 9 years. He says he sees Turkey as his home country and that he lives on trade, apart from the restaurant he opened with his friends.

Indicating that they made attempts to trade in clothing and shoes, Mohamed says, “With our entrepreneur friends and relatives, we have put our mind on this. Apart from trade, we have also opened a place that we can manage under the name of Afrika Sofrası.” Mohammed tells us that they have been working very hard to engage in entrepreneurship and trade in Turkey more comfortably and trying to sell Somalia several commodities such as furniture. In addition to all these efforts, he is also a student at Sakarya University Department of Political Science and Public Administration. He says the following about the attack:

“We were faced with an act that would not be expected from the Turkish people. I do not want to talk about this much, but we did not know what to do in the face of this attack. I was shocked as a person who studied and was raised in this country. A provoking news was reported. This attack took place right after that news. A racist group, attacking an old uncle, told us we had to leave their country, while shrugging off everyone and looking down on us.”

Indicating that he was subjected to racist attacks before, Mohamed says that he has been in Turkey since 2012, he loves Turkey as his home country and will not give up living in this country despite the attacks.

‘Street is so busy thanks to them’

We also speak to the shopkeepers in the same neighborhood. They also protest the racist attack targeting the shops of Somalians. A shopkeeper who prefers to remain anonymous tells us the following:

“We can hardly make ends meet, the Sümer 1 and 2 streets are so busy thanks to our Somalian brothers and sisters. I am very pleased that they are here, I do not have any complaints about this.”

The shopkeeper reminds us that the attack took place after the related news report and underlines that to her/him, what is done to the people who have taken refuge in Turkey is an atrocity.

‘Not an action suiting people of Turkey’ “I do not approve the attack in any way at all. This attack on the people who left their country and have started a new life here cannot be humanity. This is not an action that suits the people of our country.”

A 23-year-old Somalian migrant working as a real estate agent in Keçiören talks about the attack on London Kafe in the following words:

“We were attacked with sticks and stones. This has hurt us deeply. I think that the persons who attacked us were definitely provoked.

“We love the living conditions in Turkey. We have so many Turkish friends. I believe that we can resolve the issues that cannot be resolved with violence, sticks and stones by talking.” (CA/SO/SD)

The Vaccinated Are Worried and Scientists Don’t Have Answers