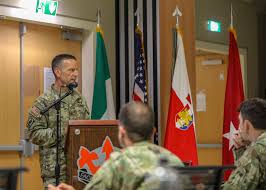 In Somalia, whether President Trump is victorious or not, Tuesday could affect the country’s fight against terrorist group al Shabab.

Trump’s 2016 campaign promise to pull U.S. troops from far-off lands includes the roughly 750 American troops in Somalia, where the U.S. Army trains the Somali armed forces to fight a terrorist group with its sights set on the American homeland.

The commander of U.S. Army Africa explained to the Washington Examiner why drones alone cannot stave off terrorists intent on attacking the United States.

“American soldiers on the ground provide capacity and capability unmatched across the world today,” U.S. Army Africa commander, Maj. Gen. Andrew Rohling told the Washington Examiner. “You can’t do that with just a drone.”

‘They provide that example and those capabilities for our partners across the continent,” he said. “Anything that we can do to degrade al Shabab capabilities and capacity in Africa will then diminish its capability and capacity to attack the United States in the Homeland.”

In October, Trump reportedly told senior advisers that he intended to pull U.S. troops from the country as part of a campaign promise to bring soldiers home from overseas wars.

Rohling said the Army has struggled to maintain America’s security assistance edge in Africa during COVID, with hundreds of training exercises canceled since March and heavy restrictions imposed by countries with strapped medical capacities.

Somalia is one of the few countries where the U.S. is still able to help during the coronavirus pandemic. That training is a vital, cost-effective way to protect Americans at home, Rohling said.

“We think that al Shabab is the most significant terrorist network in Africa that can conduct attacks into the homeland,” Rohling said by phone from Camp Ederle in Vicenza, Italy, headquarters for U.S. Army Africa.

One mission still underway is on-the-ground training in Somalia of the elite Somali Army DANAB battalion by the U.S. Army’s 2nd Security Force Assistance Brigade, which arrived in July.

“The training of Somali forces contributes to an international effort to disrupt terrorist operations and degrade their capability,” he said.

In addition to training, AFRICOM provides Somalia with aerial oversight.

“Seeing the enemy is a critical element to combating it,” he said. “U.S. Africa Command activities against al Shabab provide a valuable threat detection and threat isolation capability.”

Rohling said the continued presence of his SFAB troops over a nine-month tour builds stronger skills, confidence, and capability.

“We help to maintain the focus on degrading al Shabab and working with both the Somali and international partners there to enhance the long-term stability of that region,” he said.

In early January, al Shabab terrorists mounted a pre-dawn attack across the Somali border at a Kenyan air base housing 100 American defense personnel.

Firing automatic weapons and rocket-propelled grenades, less than two dozen attackers overwhelmed the Kenyan security forces, killing three Americans and injuring another. Only after an hour of fighting and a response from the U.S. 3rd Marine Raider Battalion were the terrorists beaten back.

The show of force is a reminder of what an unchecked al Shabab is capable of and how regional assistance keeps the terrorist group contained.

Since 2011, U.S. Army Africa has had a relationship with Kenya’s school of military intelligence. The partnership was strengthened after the Jan. 5 attack in Manda Bay.

“It has a huge impact,” said Rohling. “The more intelligence networks that we can have in and around Somalia and on al Shabab itself, what it does definitely impacts the ability for al Shabab to conduct cross border attacks. Absolutely.”

Rohling went on to describe in-person training with numerous countries around Somalia.

“Our efforts in Kenya, Ethiopia, and surrounding states will have direct impact on the security of the United States,” he said. “So that al Shabab cannot export violence across the ocean.”

Karns underscored that the value of soldier-to-soldier contact cannot be replaced with an online class.

“A physical presence strengthens trust, partnership, and delivers capability that technology can’t do alone,” he said. “The key to success is helping to get Somali security forces to a place where international assistance isn’t required. The type of training required can’t effectively be done remotely.”

No ‘Arab NATO’, No Normalization With Israel Saudi FM Says