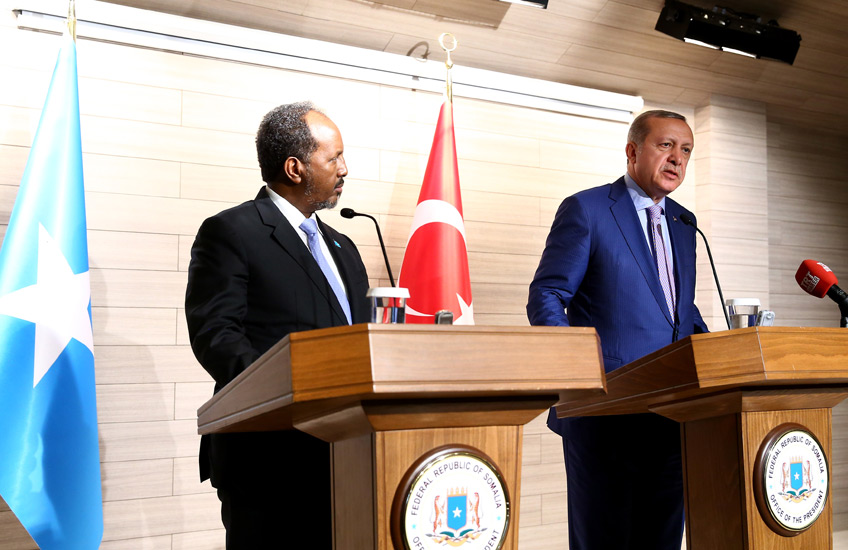 What makes the Turkish soft landing in Somalia even more fierce is that it grows on its own and opens the way for Ankara to expand its influence on neighboring countries that are not interested in Somalia’s stability. The important thing is to establish its feet and preserve its interests.
10/08/2022

The phrase “soft landing” has become used in Arab political literature as evidence of the quiet infiltration of some forces, groups and states, and it is an indication of the futility of coarse interventions that lead to security or political clashes, or both.

The previous phrase recently became popular in Sudan as a sign of the growing political doubts about the intentions of the army and its accusation by civilian forces of seeking to create the atmosphere for the remnants of the regime of former President Omar al-Bashir to erupt their claws in power without a new military coup.

This phrase applies to what the Turkish regime is doing in many areas after declaring a tactical abandonment of regional trends that led to many political, media and military clashes and almost cost Ankara heavy losses, which led it to a bow that led to its openness to Israel, Saudi Arabia, the UAE and Egypt recently.

The general bow in Turkey’s behavior towards Syria, Iraq, Libya, Iran, Ethiopia, Somalia and its differences in the eastern Mediterranean did not change. It only made adjustments and replaced open hostility with relative flexibility, and the result remains the same.

The new Turkish soft landing policy appeared in the case of Somalia. Although it lost its man, Muhammad Abdullah Farmajo in the elections that took place last May, it did not take long to turn it around with his successor, Hassan Sheikh Mahmoud, whom she experienced well during his first term as president, and relations with him may be more reliable. .

Ankara has realized that the continuous rivalries did not achieve all that it wants from focusing on the areas that it considers to be of paramount importance, and decided to replace them with a lighter method.

The visit that the new president started to Ankara on Sunday, the quality of the meetings he held and the agreements he reached, most of which took sides away from the military aspects, and choosing Turkey as a second stop, after the UAE, in his first foreign tour, confirm that the way is paved for Turkey for further incursions in the coming period.

Ankara is aware of the importance of Somalia as a distinct geographical location located in the Horn of Africa and on the southern edge of the Arabian Peninsula, which prompted it to pay attention to this spot early and place its most important military base in it, and weaved a network of relations with most of the political leaders in the capital Mogadishu and the parties, as well as links Hidden with Islamic forces playing a vital role on the Somali arena.

The combination that Ankara plotted tended to the security aspect that achieved its purpose in the last period in terms of ensuring its presence at the heart of the public scene, and now it has begun to invest what it planted with a change in its perceptions, and has resorted to employing the tools that it has accumulated over the past years, taking advantage of the asceticism of some regional and international powers in Somalia. And the despair of reforming his situation to enhance its position, and this was evident in the great reception of President Sheikh Mahmoud in Ankara.

Many of the forces that set their sights on Somalia dealt a piece, when the challenges threatening their interests increased, their security, intelligence or economic presence doubled, and if the direct threats subsided, they lifted their hands from it or kept only one of them.

The features of this policy were manifested in the approach of the United States, which intervened militarily in this country three decades ago and then withdrew after its scandalous stumble, then chose to lay the nucleus for a qualitative military presence that it abandoned and preferred selective military operations targeting the leaders of terrorist organizations, foremost of which is the Al-Shabab movement. Finally, Washington decided Repositioning militarily in a symbolic way in Somalia.

Several regional powers have gone through fluctuating stages of direct interventions in Somalia, most notably Ethiopia and Uganda, but neither of them have intertwined and folded under it all kinds of military, political and economic interventions, as Turkey did, and even the influential Arab countries that have great interests in Somalia, such as Egypt, Saudi Arabia and the UAE , its multiple presence did not match what Turkey is doing with it at the height of the regional turmoil.

The three countries are comfortable with the apparent calm with Ankara, but concerns will not disappear because all the forces concerned with Somalia are increasing and their influence in this vital and afflicted country is increasing and declining, except for Turkey, which has plans that can be modified, but the strategy aimed at centralization remains the same.

Turkey may be the most miserable country if Somalia sees a degree of stability.

Ankara was convinced that the ongoing rivalries did not achieve everything it wanted from concentration in the areas that it deems to be of paramount importance, and decided to replace it with a lighter method for those who dealt with it as an aspiring party and willing to extend its influence within different axes, and less disturbing for the leaders of countries that want to have an influential role in it in the long run.

The case of Somalia indicates that countries such as Egypt and Saudi Arabia can agree to a soft equation and accept it at the strategic level, and reject every equation based on military dimensions. The land is in a semi-collapsed state, and it has arms in multiple areas and links with most of the regions and fighting groups, which gives it a comparative advantage of being open to all.

Turkey has achieved a kind of balance and presence in Somalia that could lead to further expansion if it does not find competing forces that can limit its roles, because what Ankara is doing does not depend on the military aspect that represents concern for some forces and mobilizes them at a certain moment to reduce it or at least put obstacles On the way to prevent its inflation.

Turkey has benefited from its experiences, and the Arab countries with which it entered into a truce may be surprised by the escalation of its influence in Somalia due to the variety of tools it uses and its ability to easily penetrate. The consolidation of relations with most of the influential spectrum in Somalia in governance and the opposition has helped it increase its effectiveness on the ground.

What makes the Turkish soft landing in Somalia more fierce is that it grows alone and opens the way for Ankara to expand its influence on other neighboring countries. It does not care about the stability of Somalia or not. The important thing is to establish its feet and preserve its interests. The country that adapted to the civil war for about three decades is difficult to recover. Or his national unity in the foreseeable future.

Ankara finds an opportunity to achieve its ambitions in this type of country, and all its foreign interventions focus on it, as it provides political and security liquidity with the space to achieve its goals. become raging with other forces.