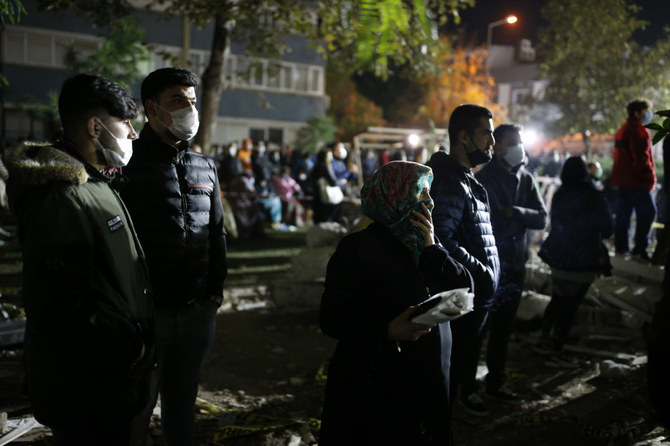 ANKARA: Canan Gullu was having coffee with her friends on her balcony when the quake struck. The head of the Ankara-based Women Associations of Turkey, she had decided to spend the weekend in her summer house in the coastal town of Seferihisar after sleepless nights spent helping victims of domestic violence in the capital.

The teacups fell on the ground, and they hid under a table until they feel safer.

“I felt the building shaking, then the house began moving toward the house next door. It was as if the ground was moving back and forth under our feet. We could barely stand,” Gullu told Arab News.

It was followed by a mini-tsunami that hit the district where she was living.

“I am now focusing on providing essential goods for the women living on the streets or whose buildings collapsed. It is the other face of poverty in Turkey,” Gullu said.

The powerful quake that hit Turkey’s western province of Izmir on Oct. 30 revealed the weak infrastructure of the country’s building stock. Although the local residents are used to living with frequent tremors, the 7.0 magnitude quake on Friday evening was the biggest they had experienced; it was as powerful as the 1999 earthquake near Istanbul when more than 17,000 people died.

The search and rescue operations continued on Saturday, with touching footages showing a mother and her three children as well as a cat and a dog being rescued 18 hours after being trapped under the debris of their building.

Turkish survivors continue to stay outside in the tents provided by the municipality for fear of aftershocks. Some hotel and restaurant owners offered free rooms and free dinners to the traumatized people.

Friday’s quake killed more than 30 people in Turkey and the neighbouring Greek islands, although that figure was expected to rise. Almost 900 people were injured, with 243 under treatment and eight in intensive care, officials said.

Despite their diplomatic row over energy drilling operations in the waters of the eastern Mediterranean, Turkish and Greek officials exchanged solidarity messages on Twitter.

“Whatever our differences, these are times when our people need to stand together,” Greek Prime Minister Kyriakos Mitsotakis tweeted.

Many people were still waiting for news of relatives trapped under the debris.

Izmir is crossed by 17 different fault lines and has been prone to frequent tremors in the past. The quake resilience of the buildings in the city and unplanned urbanization have come under the spotlight, sparking criticism of the authorities.

The Turkish government issued a controversial zoning amnesty ahead of the general elections of 2018, resulting in 10 million illegally constructed buildings throughout the country.

These were eligible for legitimate deeds, with disastrous consequences during the quakes. Izmir tops the list for the number of illegal buildings that were “forgiven” by a government move to garner more votes.

Several buildings that benefited from that amnesty have collapsed over the years, killing dozens of people. Estimates say that one-fifth of the buildings in Istanbul could be completely destroyed in a quake with a magnitude of 7 or above.

In a past interview, Turkey’s famous contractor Ali Agaoglu, who was proud of selling massive residences to Arab clients, confessed that his company used sand from the Marmara Sea during their construction work. “If there is an earthquake in Istanbul, (the number of the dead and collapsed buildings will be so high that) the army won’t even be able to enter the city,” he said.

Turkey’s earthquake tax was also the subject of intense debate earlier this year with the quakes in eastern provinces of Elazig and Malatya, after President Recep Tayyip Erdogan said: “We spent it where it was meant to be spent. And after this, we do not have time to provide accountability for matters like this.”

Special taxes were levied in Turkey after the 1999 earthquake and were later made permanent. However, there is widespread skepticism about whether these taxes were spent on quake resilience or whether they only helped the state budget at that time.