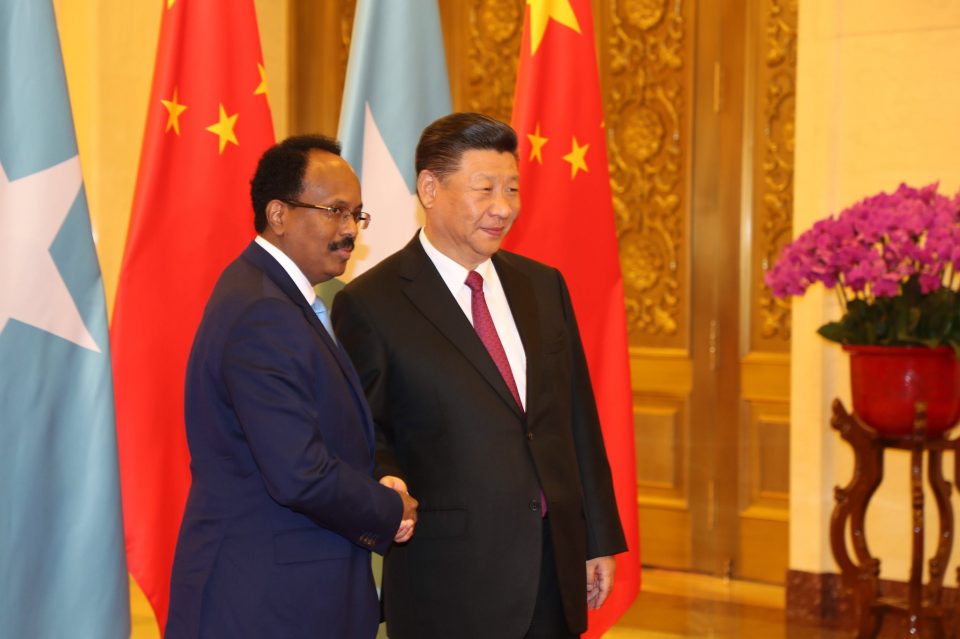 In the 2018 Summit of the Forum on China Africa Cooperation, the cornerstone of China’s investment and lending on the continent, Beijing made a pledge of $60 billion in investment, just like the previous edition.

In the same year, Somali President Mohamed Abdullahi Mohamed met with the Chinese president Xi Jinping on August, 2018, at a time when the Somali government was trying to secure deals in the ambitious Belt and Road Initiative.

The Belt and Road Initiative is a global development strategy adopted by the Chinese government in 2013, involving infrastructure development and investments.The initiative has been described as one that will be used as bait to hook African nations by giving them money they cannot hope to pay back.

Somalia has not had any large commercial dealings with the Chinese yet, but that is not to say the country is free from the Chinese trap. In 2018 the Somali government signed a highly publicised and equally criticised deal with the Chinese government where Somalia granted fishing licenses to 31 Chinese vessels to exploit tuna and tuna-like species off its coast in a bid to tap the sector for economic growth. The quid pro quo in favour of Somalia is still unclear.

A lot has been written about Chinese interest in Africa but their nature is best summed up by the assessment of Malaysia’s Prime Minister, Mahathir Mohamad, who termed their deal as “new version of colonialism” and cancelled projects that the Chinese government had signed up for, worth some$20 billon.

But African leaders seem to love the Chinese because the loans they offer don’t come with any conditions. President Xi himself is on record saying that there are “no political strings attached to their aid and investment projects in Africa.” But Africa is getting deeper and deeper in Chinese debt.

It looks like China is responding to the debt situation in Africa by increasing the portion of the package covering no-interest loans, grants and concessional loans to $15 billion. The government portion of the packages is also smaller. As Lina Benabdallah, assistant professor of politics and international affairs at Wake Forest University, explains, “Of the $60 billion pledged, $10 billion is labelled ‘investments in the next three years,’ which means that Chinese companies—not the Chinese government—are likely to fulfil those investments.”

The current fear is that a significant number of those countries are now at moderate or high debt distress, which may trigger another debt crisis. Africa is at the centre of this anxiety, and China’s role in Africa’s emerging debt crisis is attracting significant attention.

A common tactic is “debt-trap diplomacy,” (paywall) or intentionally “miring supposed partners, particularly developing countries, in unsustainable debt-based relations.” The assumption seems to be that “China’s own economic and geostrategic interests are maximized when its lending partners are in distress. While the wording says the contracts are mutual, it is the Chinese who derive most benefit.

There are also queries on the sustainability of some projectsor whether feasibility studies were carried out in the first place. In Kenya last month, it emerged that the government does not even have a copy of the contract it entered into with the Chinese for the standard gauge railway loan!

Now, while Chinese money is badly needed here,a fact they know only too well,most of the African countries don’t bother to scrutinise the proposals given by the Chinese – fat kickbacks ensure they don’t really care.

Depending on the level of desperation, the Chinese determine just how much they can bully their hapless “partners” into submission. The Ethiopian (756 km, electric at $3.4 billion) and Kenyan (498km, diesel at $3.2 billion) railway linescome into mind.

A 2017 report by the Carter Centre, an international nongovernmental organisation, concluded that “more than half of $1.163 billion in loans from China to Congo in exchange for minerals, a project dubbed Sicomines, had gone missing, with no evidence that the money had been disbursed for infrastructure projects.”

Some of their projects have been found to have defects.For instance the $470 million for the development of a grid of CCTV cameras failed to function in Nigeria.The project was intended to improve the security of the largest cities in Nigeria.

In Ghana, The Chinese have convinced locals with gold mining licenses to let them piggyback on their concessions to prospect. When the Ghanaian government found out the Chinese had rolled in with their machines, it termed it illegal and promised to act; the Chinese were furious.

The Chinese appetite for minerals – and everything Africa – is insatiable. For example, their timber needs have seen them bribe their way into African forests, threatening the total disappearance of some natural forests in many countries. A good example is Mozambique and DRC.

Even endangered wildlife species, such as rhinoceros, elephants and buffalo, are not spared. One wonders who is more stupid – the African governments that allow it, or the Chinese with their unending greed.