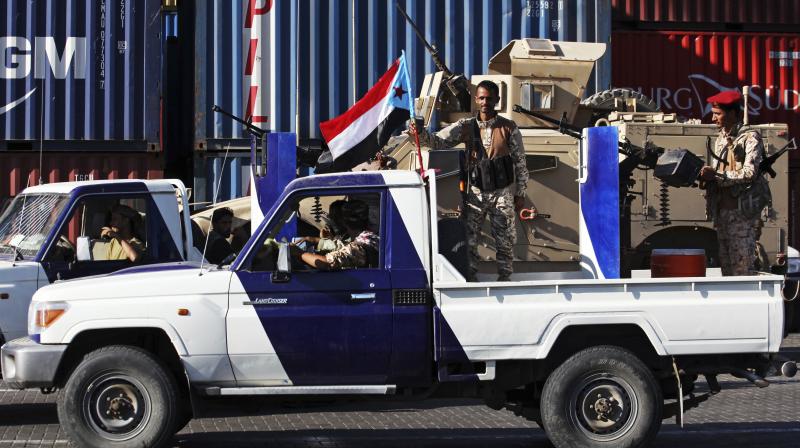 Soldiers allied to Yemen’s internationally recognized government fly the South Yemen flag at the port of Aden in Aden, Yemen. (AP File Image)
AFP
Apr 27, 2020, 8:33 am IST
The separatists’ move complicates a long and separate conflict against Huthi rebels who control much of the north Yemen

Riyadh: The Saudi-led military coalition on Monday rejected Yemen separatists’ declaration of self-rule over the country’s south and demanded “an end to any escalatory actions”.

The separatists’ move complicates a long and separate conflict, fought by the coalition and the internationally recognised government, against Huthi rebels who control much of the north.

Yemen’s separatists signed a power-sharing deal in Riyadh last November that quelled a battle — dubbed a “civil war within a civil war” — for the south that had in August seen them seize control of the second city of Aden.

“We stress the need to restore conditions to their previous state in the interim capital Aden,” the coalition said according to tweets from the official Saudi Press Agency.

“Following the surprising announcement of a state of emergency by the Southern Transitional Council, we re-emphasise the need to promptly implement the Riyadh Agreement,” it said.

The STC, which is backed by key coalition partner the United Arab Emirates, on Sunday declared self-rule in southern Yemen, accusing the government of failing to perform its duties and of “conspiring” against the southern cause.

The Riyadh pact had been hailed as averting the complete break-up of the country, but with a lack of implementation, observers have said it is effectively defunct.

“The Coalition has and will continue to undertake practical and systematic steps to implement the Riyadh Agreement between the parties to unite Yemeni ranks, restore state institution and combat the scourge of terrorism,” the Saudi-led coalition said.

“The Coalition demands an end to any escalatory actions and calls for return to the Agreement by the participating parties.”