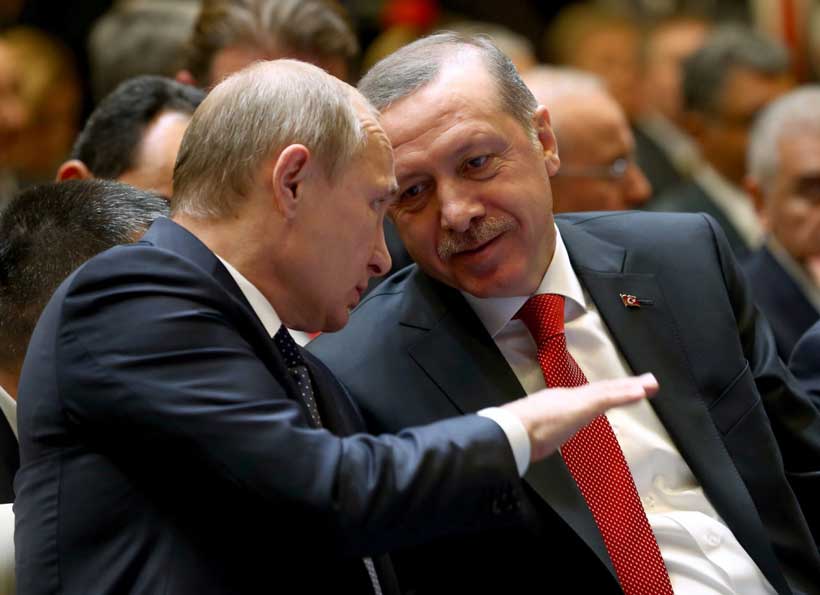 Analysts, journalists and bloggers love to compare the Russian and Turkish leaders. And to be fair, there are a number of obvious parallels between the two. Recep Tayyip Erdogan, like Vladimir Putin, is not exactly enamoured with Western liberal principles and has become disillusioned with his country’s experience of cooperation with Europe. Both preach “traditional values,” rely on the so-called “Deep People” and call for a “religious revival.” Both staunchly defend their positions on the international stage and have no qualms about challenging their many external critics and, where necessary, going against the dominant global attitudes and trends.

The fact that the two have almost identical ideologies, carry themselves in a similar fashion and quite obviously share the same view of the modern world and where it is heading should in itself contribute to a rapprochement between Moscow and Ankara. What is more, Russia and Turkey objectively have many common or converging interests. The two countries complement each other quite successfully in a variety of areas — from energy to tourism, from transport and logistics to military-technical advancements, etc.

That said, bilateral relations remain fragile and inconsistent. Russia and Turkey are at the same time companions and competitors. In some cases, they are even direct opponents. Putin and Erdogan do not exactly trust each other, although, in general, they do not tend to trust any of their foreign partners. Periodic frictions, disputes and misunderstandings between Moscow and Ankara are actively exploited by third countries, many of which have no interest in the on-off interaction between Russia and Turkey turning into a strategic partnership.

The fragility of this interaction was laid bare for all to see five years ago following the downing of the Russian Su-24 on the Turkey–Syria border. For a moment, it looked like Russia and Turkey were about to go to war, and it was roughly six months before the sides were more or less on the same page again. A similar situation arose on the ground in Syria early this year, when Ankara accused Moscow of being directly involved in the deaths of dozens of Turkish soldiers in the Idlib Governorate.

In both cases, the sides found the political will to stop before the line in the sand had been crossed, preventing the situation from spiralling out of control and bringing all manner of unwanted consequences. Unfortunately, Turkey–Russia relations could easily veer off course at any time. The logic and dynamics of Turkey’s current foreign policy continue to place Erdogan in the middle of a minefield, where any step could prove fatal for his relations with Vladimir Putin. And the mines on this particular field vary greatly — in terms of their design, their charge and the way they have been camouflaged — but any of them could lead to an unintended escalation and permanently damage relations between Ankara and Moscow. Let us look at some of the foreign policy steps the Turkish leadership could take that would most likely open up a giant rift in Ankara’s relations with Moscow.

Intervention in the Nagorno-Karabakh conflict. It should come as no surprise that Ankara has firmly and unequivocally supported Baku throughout the three decades of the Armenia–Azerbaijan confrontation. But it is one thing to offer political and diplomatic support to an ally in a frozen conflict, and it is another thing entirely to provide large-scale military assistance at the height of armed hostilities. This kind of assistance shifts the balance of power of the warring parties dramatically, gives Azerbaijan false hope that the Nagorno-Karabakh can be resolved quickly through military means and, as a result, makes the signing of any peace agreement that much more difficult.

Escalation in Libya. Turkey has been one of the main foreign actors in the Libyan Civil War from the very beginning. It was Turkish intervention that prevented Marshal Khalifa Haftar from capturing Tripoli. But if Ankara continues to internationalize the Libyan conflict by building up its own military presence in the country, helping Fayez al-Sarraj’s forces achieve a decisive victory over his many opponents in the eastern and southern regions, then it will face increasingly serious problems. And not only with Russia, but also with a number of other countries that are involved in the Libyan crisis in one way or another, from Egypt to France.

Pandering to terrorists in Idlib. Turkey’s obligations under the Sochi agreements on Idlib were to ensure the withdrawal of terrorist groups and heavy arms from the buffer zone. Two years later, and Ankara has failed to keep its end of the deal. Any hopes that Turkey would be able to somehow “rehabilitate” or at least “restrain” the Islamic fundamentalists in Idlib soon dissipated. If the terrorists, buffered by the Turkish presence in Idlib, use this territory as a base for launching active operations against Bashar Assad’s forces and the Russian military infrastructure in Syria, then it is only a matter of time until a new crisis between Russia and Turkey breaks out.

Operations against the Kurds in Northern Syria. Unsurprisingly, Russia and Turkey have different attitudes towards the Syrian Kurds and the role they would like to see them play in the country’s future. Thus far, Ankara and Moscow have managed to avoid problems on this issue by “agreeing to disagree.” However, if Turkey launches a new large-scale operation against the Kurds in Northern Syria, this will inevitably lead to the Kurds forming an alliance with the Syrian government, which Moscow would no doubt support (and perhaps even encourage). This could result in a direct clash between Damascus and Ankara in Northern Syria, with all the negative consequences this would entail for Russia–Turkey relations.

An aggravation of the confrontation with Greece. Relations between Russia and Greece are somewhat troubled at the moment. Despite this, it is extremely unlikely that Moscow would take Ankara’s side in Turkey’s current territorial dispute with Greece. All the more so because, in the present situation regarding the delimitation of economic zones in the Mediterranean, Turkey is pitted not only against Greece but also against virtually all of Russia’s partners and friends in the Eastern Mediterranean. The “Greek issue,” compounded by Turkey’s activity in Libya (which makes Moscow uneasy), could trigger a new crisis in Russia–Turkey relations.

Expansion of military-technical cooperation with Ukraine. Russia and Turkey have always had fundamentally different views on Ukraine and Crimea, especially since the outbreak of the Ukrainian crisis in 2014. One way or another, Moscow has had to come to terms with the fact that Ankara does not recognize Crimea as a part of Russia and will not give up its claims to the role of “protector” of the Crimean Tatars. However, the ongoing expansion of military and political cooperation between Ankara and Kiev — particularly the supply of cutting-edge Turkish drones that Kiev can use in the East of the country — could be a thorn in the side of Moscow. Turkey’s attempts to lobby Ukrainian interests within NATO will be an equally sore point.

The aggressive promotion of Pan-Turkism in Russia. Fears about the possibility of Turkism “penetrating” into the predominantly Muslim and Turkic-speaking regions of the North Caucasus and the Volga Region have never completely disappeared among the Russian leadership. However, these fears have been compounded by the noticeable increase in the role of Islam in Erdogan’s domestic policies (one illustration of this is the recent change of status of the Hagia Sophia Grand Mosque in Istanbul). Many in Russia believe that Turkey is moving further and further away from Kemal Atatürk’s principles of a secular state, meaning that Ankara’s promotion of Pan-Turkism will be increasingly intertwined with the promotion of political Islam. This will pose a direct challenge to Russia’s national security and even its territorial unity

The above points do not mean that Recep Erdogan is the only one treading a minefield. Vladimir Putin is himself standing in the middle of a foreign policy minefield with regard to Turkey. There is little doubt that any Turkish politician or international relations expert worth their salt could respond to Moscow’s list of grievances against Ankara with an even longer list of Turkish grievances against Russia. And these are claims that cannot simply be swept under the carpet. Russia, it must be said, has not always approached Turkey’s basic interests on the international stage with due understanding, delicacy and tact.

It is true that there are influential anti-Russian forces within the Turkish elites who are intent on turning public opinion against Moscow. But at the same time, there is no shortage of groups in Russia that do not want to see a rapprochement with Ankara and thus try to fan the flames of the traditional anti-Turkish sentiments and prejudices, which have never gone away. Overly simplified and negative perceptions of the other side as the embodiment of social anarchy, failed economic modernization and political regression dominate in liberal circles in Russia and Turkey.

There is something for diplomats, military leaders, independent analysts and civil activists alike to think about here. Whatever the case may be, the stakes in the Russia–Turkey game are extremely high — not only for Russia and Turkey, but also for a number of nearby regions where Moscow and Ankara promote their often-opposing interests, particularly Central Asia and Northern Africa.