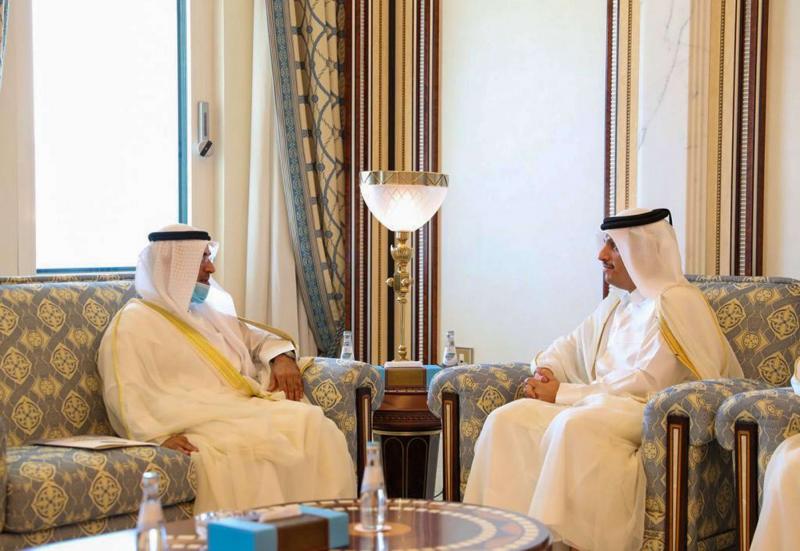 Is it possible to speak of Gulf reconciliation and the end of the Qatar crisis? There have been recent signs that reconciliation is increasingly likely. Statements exchanged between parties to the crisis indicate that reconciliation between Qatar and the Arab boycotting quartet could be comprehensive and not, contrary to some speculation, bilateral, limited or non-final.

Despite the positive atmosphere, Doha continues to play a dangerous game on the path to the success of the mission, and its media machine is showing incongruent and suspicious behaviour that may complicate the envisaged solutions to re-establish relations. Whether this is to show that Qatar is not enthusiastic about reconciliation and that it can do without it, or as a continuation of its policy to split the ranks of the Arab quartet, these tools have lost their influence and effectiveness, especially since they did not stop Qatar from moving behind the scenes to press for an end to the boycott, insisting for allies and friends to mediate on its behalf an exit from the impasse.

Riyadh represented the rest of the Arab quartet in talks with Qatar, despite the latter’s claims that discussions were merely about bilateral reconciliation. Thus, Doha continues in its endeavour to break up the cohesion of the quartet’s collective position in the hope of achieving a split in its ranks, a result it has not been able to achieve over the past three years, but still insists on trying to obtain in the final yards of the race.

The unity of the Gulf and its cohesion in the face of emerging dangers are the keywords in Riyadh’s agreement to proceed on this path. Last week, the Saudi Press Agency released a report that carried signs of an imminent agreement to end the dispute with Qatar. Titled “Historically, the Kingdom is supportive of the unity of the Gulf ranks,” the report renewed Riyadh’s commitment to its duty on the basis of the bond of brotherhood, religion and common destiny during the 41-year lifespan of the Gulf system in place, which has become an essential Arab, Islamic and international strategic dimension.

The Saudi position is supported and encouraged by its Gulf partners. UAE Minister of State for Foreign Affairs Anwar Gargash wrote on Twitter: “The administration of this file by the brotherly Kingdom of Saudi Arabia is a source of confidence and optimism, and from Riyadh, the capital of the Gulf decision, we take steps, God willing, to strengthen the Gulf dialogue towards the future.”

Political circles are eagerly awaiting the next Gulf summit scheduled for January 5 in Riyadh, in the presence of GCC state leaders. The summit will be the first stage of a solution to the crisis by opening the doors for frank dialogue and serious disclosure based on the six principles agreed upon at the meeting of the foreign ministers of the four countries in Cairo on July 5, 2017.

The road ahead, however, is still long and perhaps even thorny and full of details that the parties hope to overcome despite all the obstacles that Doha has already begun to put in place to mine the path and impede its progress.

Kuwaiti Foreign Minister Sheikh Ahmed Nasser al-Muhammad al-Sabah previously announced that “negotiations have taken place and resulted in a final agreement, and thus this agreement will be followed by practical steps to embody it on the ground,” stressing that the summit “will bless this agreement and call for continued efforts by the (concerned) states to establish and implement it on the ground.”

The Arab quartet is looking for real commitments on the part of Doha to end its trickery and its persistence to turn around and return matters to square one.

Washington too played a role in completing the mediation step in partnership with Kuwait, perhaps with the aim of raising the level of guarantees to what would be agreed upon and preventing any later turnarounds, like what had happened in 2014.

The extraordinary conditions afflicting the region, the naval fleets on high alert in the region, joint military exercises, missiles roaming the skies of Yemen, Iraq and Syria and the harbingers of a particularly tough confrontation with Iran all seem to be among the keys to the forthcoming reconciliation.

Kuwaiti Deputy Foreign Minister Khaled al-Jarallah said that the GCC summit would be an opportunity to examine the situation in the region, especially that “we are going through political circumstances whose difficulty and sensitivity everyone understands.”

Since announcing the boycott and confronting Qatar with the truth and the toll caused by its negative behaviour in the region, which went beyond adopting a so-called original policy to embarking on an agenda of tampering with the security of its neighbours and deliberately implicating the region in uncharted territories, the frequency of the negative Qatari role in a number of files decreased. This development might be due to Doha’s increasing preoccupation with dealing with the outcome of its crisis and the conditions for its own cohesion. At one point of the talks in 2019, Qatar offered to completely abandon its support for the Muslim Brotherhood.

Qatar also reduced the frequency of its disingenuous proposals and decreased its efforts to influence local societies of the Gulf states through its ideologically-laden divisive propaganda.

There is no guarantee that we will not witness another setback on the path to end the crisis, in light of the confusion that Doha faces. Turkey, for example, made a poisoned statement about the growing news of a likely Gulf reconciliation. So, in light of Doha’s full association with Ankara, Qatar seems set to adopt an approach that will, in one way or another, provoke the anger of its neighbours. Tehran did the same as its officials encouraged the resolution of the crisis, despite their constant warning to Doha against using its soil as a launch-pad to attack and target Iran. This is just an example of what Qatar has wrought by entangling itself in complicated agendas and losing bets.