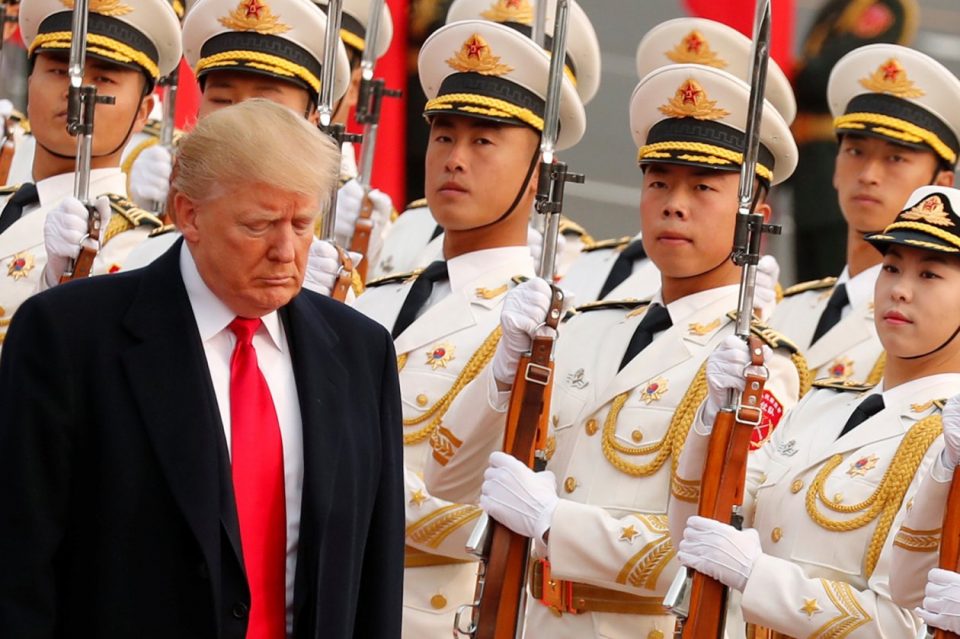 “Washington’s policy toward China has been incoherent for decades. China’s economic growth, closely tied to global trade, was producing a relatively more powerful China. Everyone liked trade, but everyone disliked a more powerful China. Nobody wanted to square up to this contradiction, so America muddled along, with U.S. economic policies making American military objectives more difficult and costly to achieve.”
by Justin Logan
Primis Player Placeholder

It’s been clear since before the coronavirus pandemic, but it’s even clearer now: Everyone is anxious about China’s rise and nobody has a clear idea of what to do about it.

The Trump administration has been consistent on the point—in its planning documents, if not in the various eruptions from the presidential podium. Both the 2017 National Security Strategy and the 2018 National Defense Strategy turned from the Middle East and pointed their crosshairs on Beijing. “Great power competition” became the watchword.

But in the wake of the coronavirus, politicians and pundits are climbing over one another offering proposals to poke Beijing in the chest. Revoke China’s sovereign immunity in the U.S. courts to allow Americans harmed by coronavirus to sue the Chinese government? Check. Get into a snit with the G-7 about whether to call the coronavirus the “Wuhan Flu?” Check. Freeze American contributions to the World Health Organization as a reaction to China’s influence there? Check. Somehow isolate the U.S. debt owed to China and renege on some of it? Check. Throw America’s diplomatic weight fully behind Taiwan? Check.

Now the administration is allegedly preparing unspecified retaliatory actions against China for its mishandling of the virus. For his part, Joe Biden used the occasion of his first foreign policy ad to promise that he would be tougher on China than President Donald Trump. With apologies to Seeley, America seems to have jumped into an epochal struggle with China in a fit of absence of mind.

The combination of Chinese misconduct in handling the virus and elite opinion in the United States appears to have turned American opinion against China. According to Pew, 72 percent of Republicans and 62 percent of Democrats have a negative view of China. Gallup’s Jeffrey Jones reports “Americans’ views of China have rarely been positive over the past four decades, but they have never held the country in lower regard than they do today.”

For all the demonizing, no one has suggested a policy that would slow China’s ascent. Three factors are preventing a coherent U.S. response to China. First, U.S. economic and security policies are working at cross purposes. Our economic policies make our security goals harder to achieve. Second, American allies are shirking their share of their own defense. Their economic atrophy and ambivalent attitudes to their defense load a disproportionate share of the burden onto Americans’ shoulders. Finally, the United States remains bogged down in the Middle East. From Syria to Iran to Iraq, American elites have baggage in the Middle East they are reluctant to leave behind. Before jumping headlong into an epochal struggle with China, Washington needs to face these fundamental flaws.

Washington’s policy toward China has been incoherent for decades. China’s economic growth, closely tied to global trade, was producing a relatively more powerful China. Everyone liked trade, but everyone disliked a more powerful China. Nobody wanted to square up to this contradiction, so America muddled along, with U.S. economic policies making American military objectives more difficult and costly to achieve.

The solution one hears most often is “decoupling” the American economy from China’s. As the Belfer Center’s Paula Dobriansky puts it, the United States just needs to “set up new supply chains, restructure trade relations, and start to create an international economic order that is less dependent on China.” Wang Jisi, a leading Chinese scholar of U.S.-China relations, calls decoupling “already irreversible.”

People should show their work. Decoupling makes logical sense given Washington’s desire to constrain Chinese power, but it is extremely difficult to see how policy can achieve this goal in a timely fashion at an acceptable cost. China is simply too big, and too central a part of the global economy to isolate and deny access to the American economy. If Washington somehow erased China’s contributions to global production, then who would take its place? These are enormous problems that are only beginning to garner attention in Washington.
Report Advertisement

For their part, China doves like Daniel Drezner tend to elide the security dimension, emphasizing instead that decoupling “would harm both economies and worsen the security situation.” The question hawks would ask is “harm whom more?” The doves are right to argue that the panic in Washington outstrips the gravity of the situation, but the trend lines on security are headed in the wrong direction if one supports U.S. aims in Asia.

American elites would be at peace with a much wealthier China that behaved as China behaved in the 1980s or 1990s, but that defies most of what most people know about international politics. Even relative doves like Robert Zoellick admit they want Washington to remain “the umpire of China’s choices.” Beijing, for understandable reasons, doesn’t like this idea, preferring fewer restrictions on its choices.

The unfortunate fact is that just as realists predicted, as China’s power has grown, so has its view of its interests and assertiveness in pursuing them. Just in recent weeks, Beijing has engaged in naval exercises off the coast of Taiwan, including an aircraft carrier; formally claimed Chinese-controlled islands that are the subject of territorial disputes with Vietnam and other nations; attributed the coronavirus to a U.S. conspiracy; and sent coast guard vessels into waters disputed with the Philippines. This is the picture of the future.

But in this context, the United States is carrying a disproportionate share of the burden of defending China’s neighbors. Washington is focused on finding more U.S. resources and attention to devote to China. Congress inserted a provision in the 2020 defense budget requiring the commander of Indo-Pacific Command to draw up a wish list by March. That commander has done so, asking for more than $20 billion in additional funding, all of which is focused on competing with China in its border regions.
Report Advertisement

What China is buying is relevant here. China’s focus on A2/AD capabilities can support modest, defensive goals, not global domination. Beijing is trying to push the United States out of its face. Instead of buying gold-plated American systems, American partners in the region should be pressed to emulate China, complicating any Chinese plans for offense just as Beijing has complicated any American plans for an offense.
Finally, American policymakers have shown that they are incapable of strategic focus. For instance, an unbelievable amount of attention in 2019 was devoted to Trump’s December 2018 false promise to remove U.S. troops from Syria. Whether from inertia, the influence of interest groups, or sheer laziness, American elites have been slow to realize that the Middle East is, from a military point of view, mostly a waste of time.

If policymakers are as worried about China as their rhetoric suggests, they should do two things. First, they need to make the U.S.-China relationship the organizing focus of American statecraft. To the extent Washington is set on continuing to try to run the Middle East, this is detrimental to clarity and focus on China. Big, powerful states matter more than small, weak states. If American elites focus on the latter, then it is to the detriment of their policy regarding the former.

Second, American policymakers should make a public show of examining allied burden-sharing. Until Defense Secretary Donald Rumsfeld ended them in 2004, the Defense Department issued annual Reports on Allied Contributions to the Common Defense. DOD mostly acted as a lawyer for America’s allies, but Trump should instruct the Pentagon to start issuing the reports again, with particular emphasis on Asian allies. (DOD should take care not to conduct the burden-sharing discussion as a protection racketeer, as Trump tends to.)

And if the executive branch will not lead a discussion on burden sharing, Congress should. In 1988, the House Armed Services Committee issued the Report of the Defense Burdensharing Panel, which had convened testimony and hearings in the months before. That report concluded pointedly that “As long as Americans pay most of the cost and assume most of the risks and responsibilities for the defense of the free world, the allies will be prepared to let the United States do so.” In 2019, bills were introduced in both the House and Senate to reinvigorate discussions of burden-sharing in Europe and the Middle East. There is no reason for Congress to leave these questions to the executive branch. Burden-sharing discussions die in darkness.
Decoupling is both a logical predicate for achieving American policy aims, and unthinkable. Equitable burden-sharing is both vital for American strategy and hard to envision. Clear-eyed focus on China as the most important issue for American statesmen is both essential and foreclosed by bureaucratic and domestic politics. If Washington wants to influence China’s role in the world, then it needs to reconcile these contradictions.

Justin Logan (@JustinTLogan) is director of programs and a research associate at the Center for the Study of Statesmanship at Catholic University.

Yes, I Insist That #ChinaMustPay Africa Damages for COVID-19