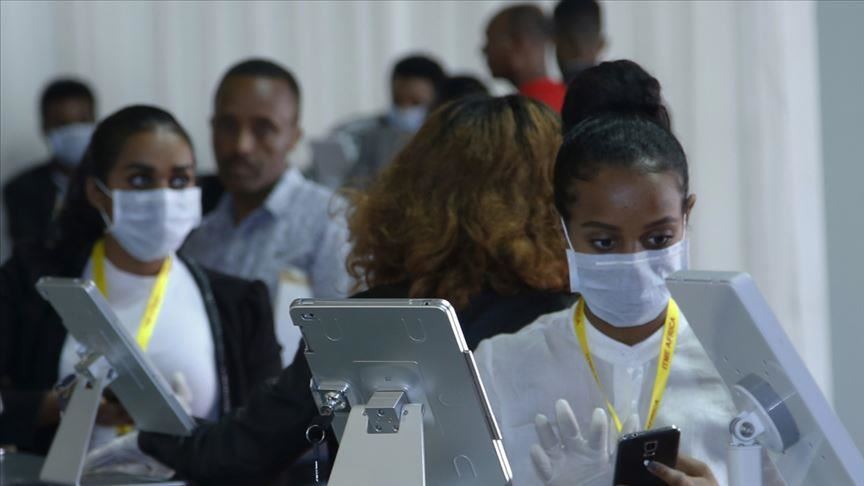 The country has harnessed community healthcare to great effect to fight the pandemic DAVID PILLING Add to myFT Ethiopian doctors train to use ventilators for Covid-19 patients in Addis Ababa. Authorities have readied quarantine places for 50,000 people and 15,000 beds in isolation centres © Michael Tewelde/AFP/Getty Share on Twitter (opens new window) Share on Facebook (opens new window) Share on LinkedIn (opens new window) Save David Pilling YESTERDAY 31 Print this page Be the first to know about every new Coronavirus story Get instant email alerts Pick-up the phone in Ethiopia these days and you are greeted not by a ringtone but with a jingle urging the benefits of handwashing, social distancing and face masks. Churches and mosques are closed, with services conducted electronically.

According to officials, community health workers have screened an astonishing 40m people in 11m households, verifying their travel history and conducting routine temperature checks.  Authorities have readied quarantine places for 50,000 people and 15,000 beds in isolation centres. Most of these have not been needed. For whatever reasons, Ethiopia has, thus far, avoided the worst of the coronavirus pandemic. According to official data, the east African country of 110m people, the continent’s second most populous, has recorded just 731cases of Covid-19 and six Covid-related deaths. True, the number has shot up in recent days, perhaps as a consequence of ramped-up testing or a sign that community transmission is gathering pace.  True, too, that not everyone will believe figures from a state with a history of authoritarian control, including of data. Yet there is little clear evidence of widespread outbreaks unaccounted for in official numbers, and even if the number of deaths were many times the state-sanctioned figure, they would still be small.

The UK, a country with a little over half Ethiopia’s population, has recorded about 6,000 times more deaths.  Ethiopia’s technocratic government decided it could not afford a rich-country response to the virus. Though its economy has grown rapidly in recent decades, Ethiopia remains a poor country with a per capita income — adjusted for prices — of just $2,500. When the pandemic began, it had 22 ventilators dedicated to Covid.  Arkebe Oqubay, senior minister and special adviser to the prime minister, says the government concluded early it could not afford a lockdown that would be difficult to enforce and socially costly. Nor did it immediately stop direct flights from China, a stance for which it was much criticised. Instead, temperature checks were imposed at the international airport. Its first case came from Japan, he says, with later imported infections mainly from Europe. Instead of strict lockdown, Ethiopia chose a response built around public messaging. “This is not a disease you fight by ventilators or intensive care units,” says Mr Arkebe, “90 per cent of the solution is hand washing and social distancing.

The only way we can play and win is if we focus on prevention.”  Recommended Coronavirus: free to read Exiting lockdowns: tracking governments’ changing coronavirus responses The government has leaned heavily on a community-based health system built by Meles Zenawi, prime minister until his death in 2012, and his health minister, one Tedros Adhanom Ghebreyesus, now director-general of the World Health Organization. Shunning flashy hospitals, Ethiopia has instead poured what money it can into basic healthcare: vaccination campaigns and child and maternal support.  One should not exaggerate. Ethiopia’s life expectancy is still a modest 66, even if that is 15 years higher than it was two decades ago. Nor can actions taken by the government account entirely for the low coronavirus death toll. “In some respects, the government has responded efficiently,” acknowledges William Davison, a senior analyst for the Crisis Group. “But that doesn’t seem to be a sufficient explanation for the low rates of infection.

There are a bunch of other factors.”  Not least of these is the fact that coronavirus has, at least so far, taken a milder form in Africa. There are only about 3,600 recorded deaths in a continent of 1.2bn people, a very low total even accounting for possible under-reporting. This owes partly to an effective and early response from many governments all too familiar with the impact of infectious diseases. It may also be linked to Africa’s relative isolation. Other factors have probably played in Africa’s favour, most plausibly its young population, with a median age of just 19.4.  Editor’s note The Financial Times is making key coronavirus coverage free to read to help everyone stay informed. Find the latest here. Public health officials are rightly cautious, fearing an upsurge in cases should governments relax. Yet even the WHO has conceded that the pandemic appears to be taking a “different pathway” in Africa. None of this means Ethiopia can breathe easily.

There could yet be a sharp increase in cases. And even if the health impact proves less severe than feared, the economic effects are likely to be far-reaching. An economic downturn could spill over into a political crisis. Ethiopian elections due in August have been postponed because of the pandemic. A state of emergency has been imposed. There is intense pushback against the central government from the mosaic of ethnically constructed states. Still, at a time when the world is trying to figure out which national responses have worked and which have failed, tentative judgments have to be made. For the moment at least, Ethiopia seems to be winning.

Africans Are Not Laboratory Rats: Moroccans to Sue French Doctors