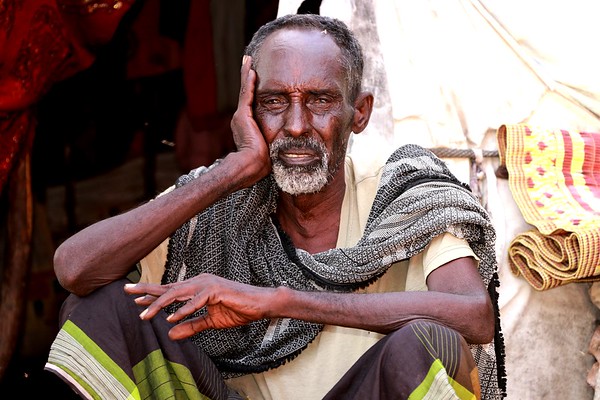 Madey Aliyow is an older displaced man without any family support in Mogaishu. Madey has lived here for six months, since being displaced from the Lower Shabelle region because of drought and conflict. He settled into this camp and constructed a makeshift shelter but has been dependent on the generosity of strangers to meet his basic needs

More than three quarters of displaced and conflict-affected people surveyed by the Norwegian Refugee Council (NRC) have lost income since the start of the Covid-19 pandemic. The devastating economic impact is tipping many into a hunger, homelessness and education crisis, the organisation said in a report released today.

June 25, 2020. Bogota, Colombia: When asked what has changed with the covid for him, Javier David Mendez Salcedo (28) answers, with a look of panic that he keeps during the interview: “Everything has changed! I’m practically in a street situation.

The report, Downward Spiral, is based on detailed surveys and needs assessments in 14 countries, including a multi-country survey of 1,400 conflict and displacement-affected people in eight countries, which shows that:

“The world’s most vulnerable communities are in a dangerous downward spiral. Already forced from their homes by violence, often with limited rights to work or access to government services, the economic impact of the pandemic is pushing them to catastrophe,” said Jan Egeland, Secretary General of NRC.

Aissata Sagara, 25 from Tori village in Mali, fled to Bankass with her three children when armed men attacked her village. “I managed to survive by doing housework in host communities. I would work for them and get food in exchange

Shayista Gul, 60, and her son Esmatullah, 17, are sitting in front of their makeshift shelter in the outskirts of Kabul city. The family has been living in this settlement for internally displaced (IDPs) for the last 13 years, ever since they were returned from Pakistan where they lived as refugees.

Compounding numerous existing crises and challenges, Covid-19 related travel restrictions, closure of markets and businesses, and the general economic downturn have caused conflict and displacement affected populations to lose work and income. The recent loss of income, limited access to social safety nets, a drop in remittances and increased debt, have created severe negative knock-on effects for those affected,

Ahmed Ali Muqbel Ali is a father of eight children. Formerly a stone-breaker, he and his family fled their village in Maqbana district in 2017. Ahmed Ali and his wife and eight children now live in a tent in Al-Malika camp in Tai

“The price of food has doubled. We have to collect scraps to feed our children,”

Shayista Gul (60) told NRC. She lives in a two-room makeshift home together with 15 other persons in a settlement for displaced persons outside Kabul in Afghanistan. “If the coronavirus does not kill us, hunger definitely will.”

The increased economic hardship is forcing many people from their homes, with many respondents reporting they had been evicted or saying that they were likely to try to move elsewhere to find work.

Uganda: Evicted due to rent arrears

Chool, 29 years old from South Sudan, with six children, spoke to NRC two days after her landlord had evicted her over $555 for four months’ rent arears

While donors and international financial institutions have responded to the crisis, the scaled-up support has not been nearly enough. As of September, the UN’s 2020 humanitarian appeals were only 23 per cent funded. In addition, funds have so far been slow to reach those in need and initial donor commitments have prioritised the health response over programs to address the economic impact. NRC warned that even a fully funded humanitarian response would not be able to meet the needs that are now emerging.

Zayno, 48, fled to Lebanon in 2013, along with his family, after losing his home and his left leg in an explosion that hit his neighbourhood in Homs, Syria. Today, he lives in a small apartment in north Lebanon together with ten other family members.

“An urgent scale-up in aid is needed, but humanitarian assistance alone cannot fix this,” Egeland said. “The rich countries of the G20 and international financial institutions must put displaced and conflict-affected communities at the centre of national and international economic responses to Covid-19. Without urgent action, this crisis will spiral out of control.”