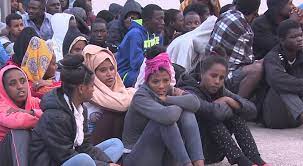 ROME: An NGO in Italy has denounced the “continuous abuse” endured by migrants in Libyan detention centers controlled by the government in Tripoli or by criminal groups.

A report published by Doctors for Human Rights (MEDU), presented at a press conference attended by Arab News, describes the situation as “unbearable” for those detained in these centers.

The report is mainly based on the accounts of migrants whose testimonies were gathered over the past nine months by MEDU’s doctors and psychologists working in the Sicilian city of Ragusa, where the migrants found shelter and were assisted by the NGO after escaping Libya and reaching Sicily by boat.

Some of the migrants who have spoken to MEDU about their experiences are currently testifying in a trial in the Sicilian capital.

MEDU has urged Italy’s government to “radically change relations with Libya in relation to migration.”

The NGO called on Italian Prime Minister Mario Draghi to demand “the respect of the human rights of migrants as a key condition for collaboration” with Libya.

“Even if it is a duty for Italy to cooperate with Libya in order to contribute to its process of stabilization and democratization, our government cannot ignore in a hypocritical way the very serious human rights violations committed against tens of thousands of migrants detained in its formal and informal holding centers,” a MEDU spokesman said.

“Nor can the role played by the Libyan coast guard in taking back thousands of people to these … concentration camps be ignored.”