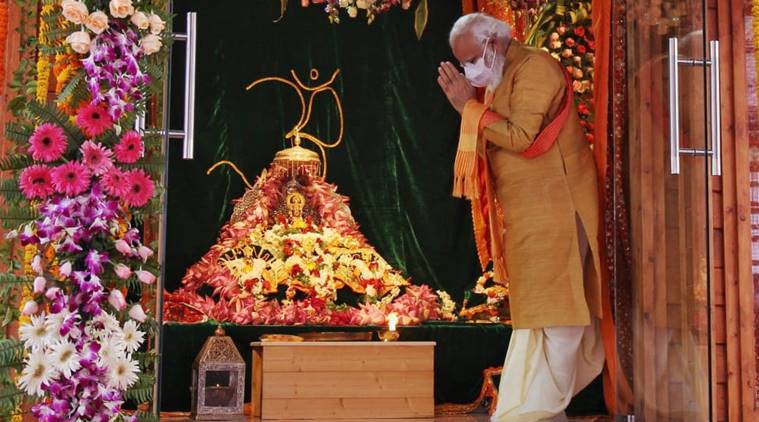 Prime Minister Narendra Modi today laid down a silver brick to mark the foundation ceremony of Ram Temple in Ayodhya.

Now, that the Prime Minister has fulfilled that old BJP promise to ‘rectify a historical wrong’ by building a ‘magnificent’ temple, could he please return to present times and address more modern problems?

Written by Tavleen Singh |
August 9, 2020 3:58:31 pm
What happened in Ayodhya last week was more than just the consecration of a temple. What we saw was a carefully scripted theatrical production whose aim was to project Narendra Modi in a new avatar. No longer just an ordinary political leader but a Rishi of yore who will lead India on a new spiritual journey to that perfect land that every Indian knows as Ram Rajya. In weaving this myth around Modi the media played a vital role.

From the moment he left Delhi for Lucknow every news channel covered his every move with breathless excitement and delirious commentary. It went something like this. The Prime Minister has now left Delhi. He has now landed in Lucknow. He is now in the chopper that will bring him to Ayodhya. In the gaps created by his being invisible, while he was aboard these two flights, every channel showed us images of Ayodhya from the evening before when children decorated the streets with diyas. Famous TV journalists gasped as they told us how wonderful it was to be present in Ayodhya when it was so filled with light and magic that it was as if Diwali had come early.

When the Prime Minister stepped out of his chopper in Ayodhya I found myself gasping as well. In his silk dhoti-kurta of pale saffron, with his hair and beard longer than ever before, he looked as if he had stepped out of the pages of an illustrated Ramayana. TV cameras followed his cavalcade of black Japanese SUVs as it wended its way through Ayodhya’s narrow streets to the site where the Babri Masjid once stood, on the exact spot where religious Hindus believe Ram was born. And, when the Prime Minister entered the temple and lay down in full prostration before the idol of Ram, I almost heard a collective gasp echoing slowly across India. For the duration of the ceremony that followed we forgot the Chinese virus, forgot that Chinese soldiers continue to squat on our land in Ladakh, forgot that the economy is in deep trouble, forgot that Kashmir was under total curfew that day. And, forgot the other grim realities of today’s India.

Now, that the Prime Minister has fulfilled that old BJP promise to ‘rectify a historical wrong’ by building a ‘magnificent’ temple, could he please return to present times and address more modern problems? Our economy was in trouble before the pandemic. Now it is in dire straits. I continue to reside in that village by the sea in which I have been since the first lockdown began, and can report that every day now I hear about people losing jobs and being pushed into poverty. Everyone wears masks and everyone tries to observe the rules of social distancing but admit that they are more concerned about finding jobs and putting food on the table. The assistance that they get from the government is slow to come and far from enough.

The Prime Minister has promised to spend more than a hundred lakh crores on building infrastructure. When is this going to start happening? Why does it take so long for us to build vital infrastructure in modern times when we were building it so well in antiquity? As someone who has read the Ramayana as an atheist one of the passages that left a deep impression on me is the one in which there is a detailed description of the building of the road that Bharat takes to implore Ram to return. Modern roads are built in almost the same way. And, the description of Ayodhya is of a city like none in modern India.

But, let us return to present times. The political problems that the Prime Minister has yet to deal with are every bit as serious as the economic problems. The consecration of the temple in Ayodhya happened (by coincidence?) on the first anniversary of the abrogation of Article 370. The abrogation had become necessary, we were told, to bring progress and prosperity to the former state of Jammu & Kashmir and to end the activities of jihadi secessionist groups.

The reality is that the jihadists continue to commit monstrous acts of violence. And, Kashmir’s economy has been in deep trouble ever since it was demoted to being a Union territory because the tourist industry, which was its strongest pillar, has come to a standstill. The Valley has been in almost total lockdown for a year and the Internet has been suspended for the longest time, but the violence continues. Why?

The Prime Minister must have asked himself the same question, which explains why the Lieutenant Governor was changed last week. But, if anyone in Delhi thinks this will solve the problem they need to think again. What might help is a political process and immediate steps to restore full statehood. But, Kashmir is only one of a long list of political problems that the Prime Minister needs to deal with. At the top of that list in my view is an urgent need to make our Muslim community feel less alienated.

But, to even begin going down that list Modi needs to snap out of his new avatar. At the risk of sounding as if I am giving my latest book (Messiah Modi?) a plug, may I say that India needs a political leader not a messiah or a maharish.