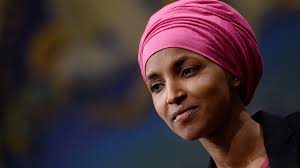 Ilhan Omar was a newly sworn-in Minnesota state representative when Donald Trump was inaugurated in 2017. Weeks later, he promptly enacted the travel ban on majority-Muslim countries, and Omar, a Muslim woman who fled war-torn Somalia at age eight and immigrated to the U.S. at 12, stood on the steps of the Minnesota Capitol to denounce the policy. “I remember being so overwhelmed, anxious, and frightened,” Omar told Vogue by phone on Tuesday. Trump and Omar would continue to be linked: In 2018, Omar was part of the uprising of women who ran in resistance to him. She was elected to the most diverse U.S. Congress in history as the first Somali American member, and with Rashida Tlaib, one of the first two Muslim American women.

Representative Omar has been a target of relentless, racist attacks by Trump, including his notorious 2019 tweet urging Omar and fellow Squad members to “go back” to the “totally broken and crime-infested places from which they came.” Omar replied in a speech from her home state: “His nightmare is seeing a Somali immigrant refugee rise to Congress,” she said, “and so we are going to continue to be a nightmare to this president.” On January 6, the day of the Trump-incited insurrection on the U.S. Capitol, Omar was one of the first members of Congress to draft articles of impeachment against him. With hours before Trump left office, Vogue spoke with Omar about acting decisively on impeachment, the end of the Trump administration, and the “deep, unhealed wounds” that await President Joe Biden

Vogue: How are you, after all of the stresses of the past few weeks?

We’re in the final hours of the Trump presidency. What’s crossing your mind as it comes to a close?

I felt such relief on the day that the election results were announced, to have survived and prevailed, myself and as a nation, from the dangerous presidency of Trump. And now, I guess, as we count the hours until we put him in the dustbin of history, it really is, in the strangest way, a very hopeful time.

Your whole time in office has been under this person. I think there are things that you would be fighting for no matter who’s president, but how does this change your day-to-day job?

Within a few weeks of me getting sworn in to the Minnesota House [in 2017], I held my press conference denouncing his Muslim ban. And I remember being so overwhelmed, anxious, and frightened that I had to just, like, go to sleep. My body was in such a state of shock to be staring down a president of the United States who would undertake the most racist, inappropriate policy in our country, as a newly sworn-in elected representative of the community that was included in that policy. He has been part of my life as a public servant and has been part of my community’s resistance, and to know that that Muslim ban will no longer be in effect, that we can go back to the work of advocating for social and economic justice and addressing the day-to-day disparities that many of the people that I represent are dealing with is such a relief.

You were calling for impeachment by around 4 p.m. on January 6, the day of the insurrection, and you were one of the first people I saw making that call. Why were you acting so quickly and so decisively?

I recognized that this was a violent and soon-to-be deadly attempt to interrupt our democratic process. It was a targeted blow at the most essential process that makes us a democracy, and this insurrection that we are all watching was directly incited by the president. I knew that if we were to continue to say that we are a country of laws, where we have leaders who take an oath to defend the country from foreign and domestic enemies, that we could no longer sit silently and turn a blind eye. His actions, if we thought before were impeachable…this one was in a category of its own.

This same president told you and your colleagues to “go back” to the countries you came from and attacked you as an immigrant and as a Muslim woman. Was there a certain sense of validation for you, to have the power to hold him to account? Did you feel that in your soul in any way?

I did. At least for the better half of the two years I’ve been in Congress, this president, with his insistence on labeling me as a foreign enemy, has directly incited serious death threats and has cast many immigrants as less worthy of being American and having access to the American dream. The tools that he was using were tools that demagogues used to keep us afraid. He and his supporters were afraid of people like me and anyone willing to speak truth to power and fight for the many and not the few. But our job was to make sure that the emperor would have no clothes. Ultimately, he has been not only humiliated in front of the nation with his second historic impeachment, but he’s humiliated throughout the world. And we all still get to be members of Congress shaping the policies that will govern this nation for generations to come.

Mitch McConnell made a statement on Tuesday, blaming Trump for the insurrection, but McConnell didn’t start the Senate impeachment trial. Why is it so important to continue with impeachment?

For the Senate to move forward with removal and accountability, even retroactively, is even more important than the actions that we took in the House. That is how you make sure that, regardless of how powerful someone is, they have to be accountable. That’s the message that the future Trumps need to get. Inaction, really, is sending the wrong message, and history will not be kind to them.

Many Congress members felt a palpable sense of fear during the coup attempt. But that feeling was not new to you and to some of your colleagues, particularly women of color, who have felt the threat of the Trump presidency all along. Was it strange to see others grasp what it is to govern with that kind of weight?

Well, first of all, it is shameful to even think about governing in fear in an open and free democracy. And as one of the first Muslim women elected to Congress, I faced threats to my life since my first day in the halls of Congress. I do feel for and sympathize for my colleagues who are finally realizing that we serve with people who potentially pose a threat to our lives and that we are, in some ways, being guarded by people who we can’t fully trust to protect us.

But it’s also important to remember that no matter how bad the threats become, we cannot be fearful in fulfilling our oath of office. People often talk about how I’m courageous, but I believe everybody should be courageous. Courage is being scared to death but remaining resolute. What happened on [January 6] is the one event that needed us to be courageous on behalf of our republic. I laugh about this because it is silly thinking about people who constantly are taking photos and doing campaign ads with bullets and guns and saying they’re going to go defend the Constitution, to now not have the courage and the strength and the bravery to just do it with their vote.

I know Joe Biden was not your preferred primary candidate, but how are you feeling about him taking office?

The role that has been cast for President Biden is profound. He’s tasked with bringing us back from the brink. He will govern a country that has deep, unhealed wounds and layers of unresolved traumas. Our country is faced with an unprecedented health and economic crisis, but I do believe that he acutely understands the task at hand and has proposed an economic package that meets the needs of the American people. I am particularly excited about some of the promises that he’s made to end the Muslim ban, to reinstate DACA, to increase the refugee admission by over 100,000 in 2021. I believe with a Democratic majority in the Senate, the sky’s the limit on the progress that we can make, if we remain resolute and bold.

You tweeted recently, in the middle of all the chaos and trauma, that your daughter, Isra Hirsi, got into college, and you pointed out your “immigrant parent smile.” Can you explain what was behind that smile?

It’s funny how we, often as parents, turn into our parents. My dad was sort of a helicopter parent in regards to my educational well-being, and as I’ve had children of my own, I have lived my wished educational experiences through them. In these dark days, to see my kids continue to thrive and be a beacon of hope for me has been truly life-saving. Isra is an exceptional child—I’m biased because I’m her mom. She’s applied to many universities and this is just one of the first that came in and she’s like, “It’s just an acceptance. I don’t even know if I want to go there.” And I’m like, “You got into college!” I’m much more excited than she probably is. For many of us who hold on to the promise of what the second chance at life brings to us as immigrants, every opportunity is one that is celebrated with tremendous joy.

Is Egypt pitting Sudan against Ethiopia?