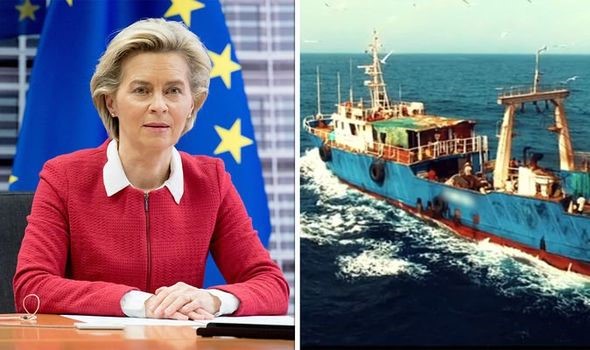 When you subscribe we will use the information you provide to send you these newsletters. Sometimes they’ll include recommendations for other related newsletters or services we offer. Our Privacy Notice explains more about how we use your data, and your rights. You can unsubscribe at any time.

Netflix’s ‘Seaspiracy’ has left viewers shocked after filmmaker Ali Tabrizi uncovered the impact commercial fishing has on the world. Through a number of interviews with experts and activists, a sobering picture of the marine ecosystem is painted, including a claim that humanity faces “empty oceans” by 2048 if we continue to fish at the current rate. Under the Common Fisheries Policy (CFP), the EU “aims to ensure that fishing and aquaculture are environmentally, economically and socially sustainable”.

But Mr Tabrizi claimed that government incentives were playing a part in the sustainability problem.

He said: “A subsidy is taxpayer money given to an industry to keep the price of a product or a service artificially low.

“In an increasing number of countries, more money was going out than the value of fish coming back in.

“Subsidies were originally started as a means to ensure food security.

The EU came under fire in the documentary (Image: GETTY/NETFLIX)

“But, ironically, they are now the cause of food insecurity in many developing regions.”

And the EU is said to be top of that list, with a fishing fleet of nearly 100,000 vessels, according to reports.

Nonprofit ocean conservation organisation Oceana previously claimed that “despite the precarious condition of fisheries in Europe and beyond, the EU continues to provide massive subsidies to support its fishing fleets”.

They claimed that Europe was one of the world’s top three subsidisers, along with China and Japan

And Sea Shepherd Captain Peter Hammarstedt said this has led to the EU “plundering” waters in developing countries.

He said: “Fishing by the EU in places like West Africa is driven by EU subsidies.

“That means that local businesses can’t compete with the economic might of the EU.

“Really it’s just a continuation of a history of plundering the African continent.”

But Mr Tabrizi detailed how the EU was not the only one to blame.

He said “These intensive fishing operations weren’t only wiping out the fish, they were also destroying the economy.

Western circles in Turkey are attacking Islam more than colonialists ever have!