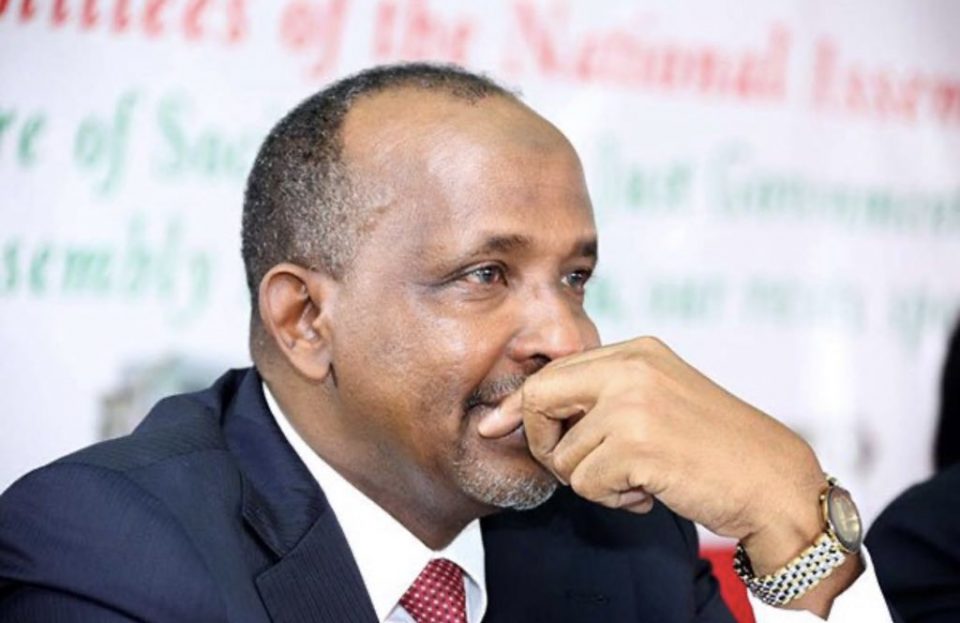 Former National Assembly Majority Leader Aden Duale has broken his silence on the ongoings in the political arena months after he was kicked out of the plum position.

Giving his views on the fallout in the ruling Jubilee party, the Garissa Township MP says that he regrets the decision to fold up parties in the run up to the 2017 General Elections to form Jubilee.

In a recent interview with the Standard, Duale said that he had reservations in the proposal to dissolve the United Republican Party (URP) but his then party leader Deputy President William Ruto and The National Alliance (TNA) counterpart Uhuru Kenyatta convinced him on the need to merge the parties.

With the rise of Kieleweke and Tanga Tanga factions and continued isolation of DP Ruto from key Jubilee party decisions, Jubilee is a shadow of its former self.

Duale, a vocal Ruto ally, says that if President Kenyatta does not act Jubilee will die a natural death.

“We collapsed 14 parties to form Jubilee. We wanted to kill ethnic-based parties. I had misgivings about dissolving URP. Uhuru and Ruto convinced me. The party grew and managed to have elected leaders in 44 counties, with 170 MPs, ” said Duale.

“But today, it is a shell. I regret the decision to collapse parties. If the president will not salvage Jubilee, the 2002 scenarios in Kanu will play out. There will be a mass exodus by leaders who will form a new outfit. I urge the president to rescue it. He can leave a legacy of leading the largest united, cohesive party.”

Duale was stripped of his majority leader role on June 22 following a Jubilee purge that extended to the national assembly.

The MP was among a number of lawmakers allied to DP Ruto who were ejected from house positions over alleged disloyalty to the party and its leader — the President.

He was replaced by Kipipiri MP and former Finance Minister Amos Kimunya.

Three months after his ouster, Duale says he has no regrets as he did his best in his seven years in office as House majority leader.

“I have absolutely no regrets. I’m a man of faith and I believe no position is permanent. Everyone who gets a chance to serve in public office, even the presidency, has to hang their boots at some point,” he said.

“I am happy having had the privilege to be the first leader of majority under Article 108 of the 2010 Constitution. I thank President Uhuru Kenyatta and his deputy William Ruto for entrusting me with such an important constitutional office.”

The MP said that the ouster did not come as a surprise as betrayal is normal in politics.

“In politics, the common denominator is betrayal and deceit and this you can ask Raila Odinga, William Ruto, Kalonzo Musyoka, Uhuru Kenyatta and many others who faced challenges in their political careers. I knew a day would come when I would leave office. I will focus on the future not the past. I am now doing my memoirs, ” he added.

British training of Saudi pilots continues amid bombing of Yemen