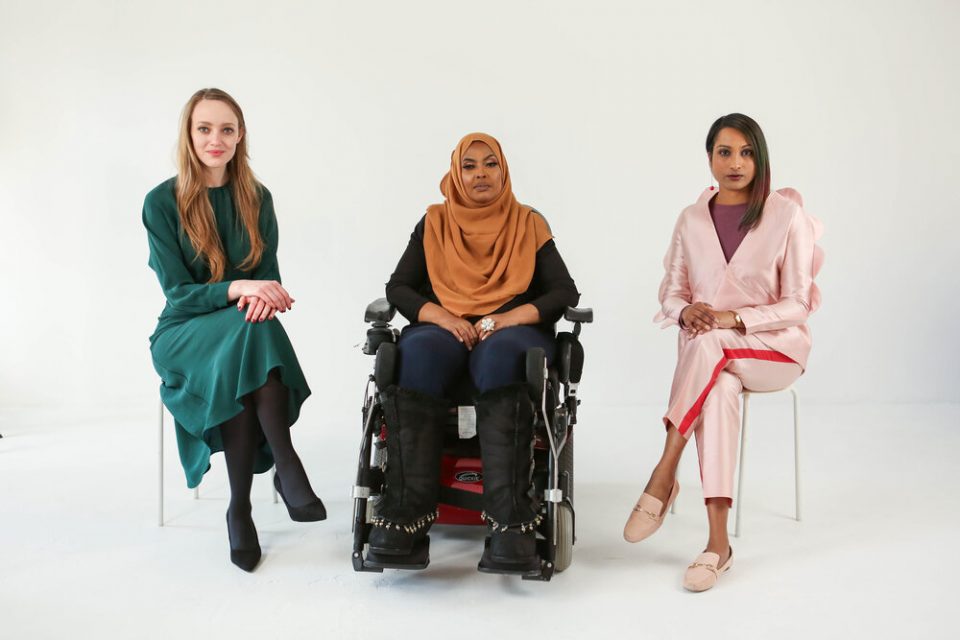 Faduma Farah (centre)
Interview by Anu Shukla
The New Arab Meets: British-Somali designer,, who, unsettled by the lack of clothing options for wheelchair users, set out to forge a new style that truly accommodates disability. Now, her collection is debuting at London Fashion Week. Wheelchair-friendly fashion will be showcased at London Fashion Week this fall thanks to a new line of clothing that is being co-created by a British-Somalian entrepreneur.

Faduma Farah, an energetic young mother was a size 12 when she walked into a hospital in 2011; emerging in a wheelchair the following year a size 24. A meningitis infection had paralysed her from the neck down and a battle to regain control of her life ensued.

Engulfed by the shock of her new reality, Farah, who is now 45, said her world was “turned upside down” as she dealt with accepting her condition while at the same time, built resilience to bring movement back into the upper part of her body.

“When you are told you were pronounced dead three times and came back fighting, it gives you strength somehow. So when I returned home, I found myself fighting for life again; this time relearning how to live again, how to eat, speak, write, breathe again. I was building everything with courage, starting everything again from the beginning and trying to cope with a world that was completely new for me,” she begins.

But the lover of elegant modest fashion told The New Arab her condition did not prevent her from taking pride in her appearance and it wasn’t long before she realised the lack of access to adaptable/wheelchair-friendly clothing.

“Every time I walked into a shop I noticed there was never a mannequin in a wheelchair. It just goes to reveal the lack of representation for disabled people in the fashion industry. But I know things in the UK are slowly changing, so I plan to make my contribution to this change.

“And I know the potential is there. We only have to look at the maternity market. If we can make clothing for maternity wear, which is a temporary condition, then we can also make clothing that is fashionable for people who have disabilities and are living with more permanent conditions.”

The potential for tapping into the market for disability fashion is vast. According to the charity We Are Purple, there are more than 14 million disabled people with a ‘combined spending power of £274 billion’ in the UK

Farah said she first became aware of the lack of access to accessible fashion during her rehabilitation process. “Everyone was wearing sports gear but I could not fit into it because I had ballooned so much. So my husband had to go to Evans and buy me these huge sized t-shirts and tracksuit bottoms. I had gone from a size 12 to 26. And I was in a wheelchair, so it was tough.”

While she was caught up with the challenge of coming to terms with her condition, she said nothing could have topped the devastation of losing her son Mohamed, who died of natural causes at the age of nine in 2013 – a year after she came out of the hospital.

“My husband Osman Ahmed is my best friend, it is thanks to him, my other son and my mother that I was able to pick myself up. They gave me my strength.”

That same year, Farah began to feel inspired by the idea of launching her own line of wheelchair friendly fashion. Tailor-made clothes sent by her mother from Somalia were aesthetic, modest and easy to wear – and helped trigger the idea. “My mother would tell the tailor what to do and I would receive day wear items like salwar kameez  sent to me from Kenya, where she lives.”

But it was not until the pandemic kicked off that she suddenly realised it was a now or never moment to find a solution to launching her own wheelchair-friendly collection.

By November, she had conceived the idea of a fellowship programme to identify a designer to help co-create the collection. The following month, she said a mutual friend introduced her to Oxford Fashion Studio, an organisation that although does not provide the funding, helps designers launch clothing lines at LFW and NYFW.

The potential for tapping into the market for disability fashion is vast. According to the charity, We Are Purple, there are more than 14 million disabled people with a “combined spending power of £274 billion” in the UK. Meanwhile, the global market for adaptable fashion has been predicted by Coherent Market Insights to reach an estimated $400 billion by 2026.

Farah is now preparing to join a team of fashion experts to help vet the right applicant to develop the line.  Tiffany Saunders, Oxford Fashion Studio campaigns director told The New Arab that “some really amazing designs” have come through so far.

Saunders agrees that fashion for people with disabilities has had a slow start in the UK. But even in the US, Tommy Hilfiger ‘adaptive apparel collection for children’ only took off in 2016 before expanding into adult wear the following year.

Efforts to introduce adaptable fashion to the British catwalk is “evidently part of a much bigger picture,” says Saunders.

She added: “Faduma shouldn’t have to be doing this, but she is because it doesn’t already exist. We want to get the message out about the importance of adaptable fashion.

“This is one of the beautiful things about Faduma’s Fellowship because it is bringing together an amazing community of designers who are inspired to create fashion for people with disabilities. Some designers will adjust their current templates, by changing the place for a zip or label, while others may launch entirely new designs.”