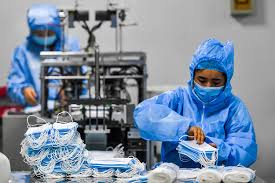 The autonomous Xinjiang region in northwest China is home to a large population of Muslim Uighur people, an ethnic minority who speak a Turkic language and face repression from the Chinese government.

The autonomous Xinjiang region in northwest China is home to a large population of Muslim Uighur people, an ethnic minority who speak a Turkic language and face repression from the Chinese government.

The Times uncovered that many of these people are being placed in factories to work on PPE products through “contentious government-sponsored” programs, which experts claim could be identified as forced labor.

Through these programs, Uighur workers – in addition to their factory responsibilities – are required by the Chinese government to learn Mandarin, pledge their fealty to China and attend mandatory classes throughout the week – a clear form of political indoctrination.

In its report, the Times dissected hundreds of videos, photos, government documents, satellite images and shipping data in order to illustrate how the rise in demand for PPE equipment during the coronavirus pandemic directly links to the Chinese government’s controversial treatment of Uighur Muslims.

Notably, they featured a video produced by the Chinese government, that broadcast on Chinese state television, showing “grateful” workers donning suitcases preparing for their new positions at the Tianshan Textile factory.

“But behind this propaganda is a hidden story, about a longstanding and highly controversial government labor program that experts say often puts people to work against their will,” the Times said in their visual investigation. “We identified several Chinese companies that use Uighur labor to produce PPE, and we tracked some of their shipments to consumers in the US and around the world.”

Amy K. Lehr of the Center for Strategic and International Studies noted to the Times that under international law this type of labor could be classified as forced labor, stating that while the video looks innocent these laborers have no choice in the matter.

China’s Embassy in the US told the Times that the programs are aimed to help “local residents rise above poverty through employment and lead fulfilling lives,” and they proudly promote the program as such.

As the demand for PPE equipment spiked along with the accompanying coronavirus pandemic, China began to open up factories to mass produce the highly sought after medical equipment. And where before the pandemic only four companies were producing PPE equipment in Xinjiang – where the majority of Uighur Muslims live – as of June 30 there are 51, at least 17 of which were participating in government-sponsored labor transfer programs.

“Any company that is procuring masks or other personal protective equipment that wants to avoid forced labor content in those products should not be sourcing them from Xinjiang,” Scott Nova of the Workers Rights Consortium told the Times.

As discussed earlier, China broadcast the welcoming of around 50 Uighur laborers to the Tianshan Textile factory. According to the Times, in March the government displaced around 2,000 Uighurs from Hotan in south Xinjiang – 50 of those were brought to Tianshan specifically to create PPE equipment.

“Tianshan didn’t respond to our request for comment. But it’s a clear example of how Uighur workers are fulfilling the increasing need for PPE,” the narrator said in the Times video.

However, they note that “the labor transfer program is part of a larger system of repression and mass incarceration. It’s virtually impossible to know who in the transfer program was forced to participate. Speaking out is incredibly risky, and the government is shaping the narrative.”

A spokesperson for the Chinese embassy in the United States said in an email that the suspicions of forced labor were an effort to bring down Chinese business.

“The lawful labor rights and interests of the Chinese citizens of all ethnic groups, including those in Xinjiang, are protected by law,” the spokesperson said. “The accusation of ‘forced labor’ in Xinjiang is both false and malicious.”

UN experts and activists say at least a million ethnic Uighurs and other Muslims are held in detention centers in Xinjiang.

The UN panel accused China of turning its far-flung western region of Xinjiang “into something that resembled a massive internment camp shrouded in secrecy, a ‘no rights zone.’”

China rejects the allegations that it has locked up large numbers of Muslims in re-education camps. The facilities, it says, are vocational training centers that emphasize “rehabilitation and redemption” and are part of its efforts to combat terrorism and religious extremism.

The crackdown includes tight control over information and access to the region. Xinjiang is now one of the most heavily policed areas in the world, according to academics and human rights groups. This follows the launching of a “people’s war on terror” in 2014 after a series of violent attacks in Xinjiang and other parts of China that authorities blamed on religious extremists.

While China says the Uighur camps are vocational training centers, they are heavily guarded.

Uighurs have bristled at what they say are harsh restrictions on their culture and religion. They have faced periodic crackdowns, which intensified after riots in the regional capital in Urumqi in 2009 killed nearly 200 people.

Bombings in Xinjiang and attacks allegedly carried out by Uighur separatists, including a mass stabbing in the city of Kunming in China’s southwest in 2014 that killed 31 people, led to further restrictions.

In recent years, under Chen Quanguo, the Communist Party secretary in Xinjiang and a loyalist of President Xi Jinping, measures against Uighurs have included a ban on “abnormal” beards for men and restrictions on religious pilgrimages to Mecca.

In his report, Zenz said his findings represented the strongest evidence yet that Beijing’s policies in Xinjiang met one of the genocide criteria cited in the UN Convention on the Prevention and Punishment of the Crime of Genocide, namely “imposing measures intended to prevent births within the group.”

Documents from 2019 revealed plans for a campaign of mass female sterilization targeting 14% and 34% of all married women of childbearing age in two Uighur counties, Zenz wrote. The campaign, he said, likely aimed to sterilize rural minority women with three or more children, as well as some with two children – equivalent to at least 20% of all women of childbearing age.

White House discussions are still ongoing about other potential targets for sanctions and no final decisions have been made, according to a person familiar with the matter.