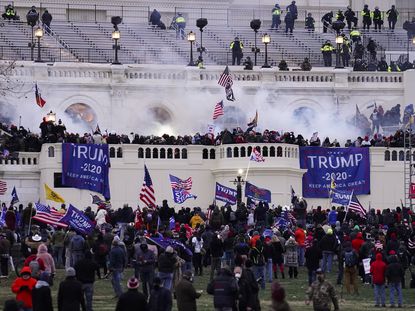 If the Republican party wants to maintain any shred of legitimacy moving forward, it, as well as the man at its head, must speak in one clear voice and say, “We do not like protesters who break into the US Capitol and use violence.”

Like many Israelis and others around the world, I looked on in shock at the images coming out of Capitol Hill Wednesday night. The Confederate flag, in the name of which many fought to maintain slavery during the American Civil War, was flown in the US Senate, protesters made it into the Senate Chamber, and some even entered House Speaker Nancy Pelosi’s office.

The background for the riots was a meeting that began on Wednesday and ended Thursday morning, in which the US Congress convened to certify President-elect Joe Biden’s election victory. The protesters, supporters of US President Donald Trump, believe there has been widespread voter fraud and are therefore unwilling to accept the election outcome. Trump, for his part, did not stand on the sidelines. He inflamed tensions in a speech in which he said, “We will never give up. We will never admit defeat.” Those are not just empty words; they led many protesters to use violent means to break into and wreak havoc on the US Congress.

But the compound and the offices weren’t the only things destroyed in the riots. American democracy and the Republican party were destroyed along with them. The world’s most important democracy has proved how low a threshold it has. Despite all the talk of promoting democracy around the world, Americans find it hard to implement the system at home.

The protesters, who clearly do not represent the majority of Republican voters, have also destroyed the party’s legitimacy. To my mind, their behavior has delivered such a blow, some might even call it a knockout, that the party may find it hard to recover. The radicalization among some of the party’s members has already made it something of an outcast in certain circles. Up until now, some people’s disgust with the Republican party had more to do with the way they played the game, and the moves it made some considered extreme.

All that changes from now on. The disgust will no longer be over party moves but rather because some of its supporters preferred to simply set the entire playing board on fire. Instead of using democratic means to promote moves their rivals oppose, they now rule out democracy when they don’t get their way.

Two hours after the riots broke out, Trump posted a video in which he said, “Go home. We love you.” In the video, the president basically said that while he was unwilling to burn the entire system down, he would accept a small fire. That is a mistake.

If the Republican party wants to maintain any shred of legitimacy moving forward, it, as well as the man at its head, must speak in one clear voice and say, “Yes, we like protesters who stand outside the Capitol with signs. No, we do not like those who violently break into the US Capitol.”

Americans have a right to protest if they believe there was voter fraud. But they don’t have the right to try and forcefully change the election outcome. Unfortunately, Trump has not said anything along those lines, and for that, generations of Republican leaders will be made to pay down the line.