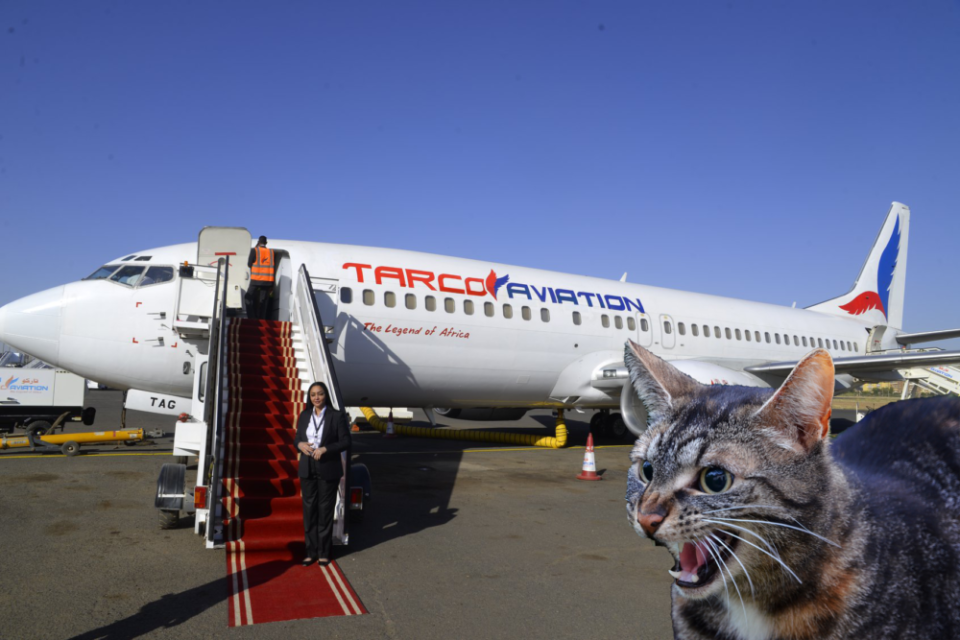 A 737 pilot was attacked by a cat! Photo: Tarco Aviation / Simple Flying

A scheduled flight from Sudan to Abu Dhabi was forced to return to its origin after the cockpit was hijacked by a furry infiltrator. The clawful situation arose after a cat, thought to have stowed away during cleaning, woke up and became terrified by his new surroundings. He attacked the captain, causing the plane to return to Khartoum and giving passengers a hiss-terical story of a flight gone wrong.

Some aviation stories are pawsitively unbelievable, but in this case, we’re not kitten around. A Tarco Airlines flight from Khartoum (KRT) to Doha (DOH) had to return to its origin after pilots encountered a fur-midable opponent shortly after takeoff.

The Boeing 737 departed Khartoum on time, and was around 30 minutes into its journey when a cat-astrophe occurred. A feline stowaway appeared unexpectedly in the cockpit, to the great surprise of the Sudanese pilots.

According to reporting in Al-Sudani, the kitty was not a happy passenger, and proceeded to attack the captain. While the crew made every attempt to capture the aggressive stowaway, it proved impossible to get near the furry hijacker. Unable to continue the journey, the pilots set about returning to Khartoum, to the surprise of the passengers onboard.

While you might assume the naughty cat was an escapee from a passenger’s on-board belongings, it seems he was more likely to be a feral feline who sought a comfortable place to rest. Al-Sudani reported that the plane was stationary in the hangar overnight for cleaning and preparations. It is believed that the cat crept onboard and found a comfortable spot to rest in the cockpit.

Of course, the ICAO code for Khartoum – HSSS – is completely coincidental, but beautifully expresses the emotion felt by the cat at finding he was several thousand feet in the air.

Not the first cat-attack in the air

Although this story is somewhat unusual, more surprising is that it’s not the first time this type of incident has occurred in the air. In August 2004, a Brussels Airlines pilot became a victim of a claw-ful experience when an escaped feline ran wild in the cockpit.

The aircraft, an Avro RJ, was traveling from Brussels to Vienna with 62 people onboard when a cat appeared in the cockpit. The animal had apparently escaped from its airline-approved container and began scurrying around the cabin. A member of cabin crew opened the cockpit door to serve refreshments to the flight crew, and the kitty seized the opportunity.

Probably attempting to escape his flying prison, the cat shot into the cockpit and promptly found he was even more trapped than before. It reportedly became very agitated, and began scrabbling around the flight deck, scratching the co-pilot on the arm. Worried about the damage the creature could do to the cockpit’s sensitive equipment, the pilots took the decision to turn back to Brussels around 20 minutes after takeoff.

The airline described the situation as a ‘freak incident,’ claiming that a lot of coincidences had converged, leading to the unusual occurrence.

For Tarco Airlines, this is likely one to chalk down to experience. As we’ve seen in the past, cats can be masters of infiltrating even the most secure of spaces, so they might want to step up their pre-flight checks to avoid a similarly hiss-terical situation in the future.

Editor –  Joanna has worked in publishing for more than a decade and is fast becoming a go-to source for commercial aviation analysis. Providing commentary for outlets including the BBC, CNBC, Reuters Thomson and others, she works closely with IATA, AviaDev and various airlines and suppliers to get the inside track on the global marketplace.