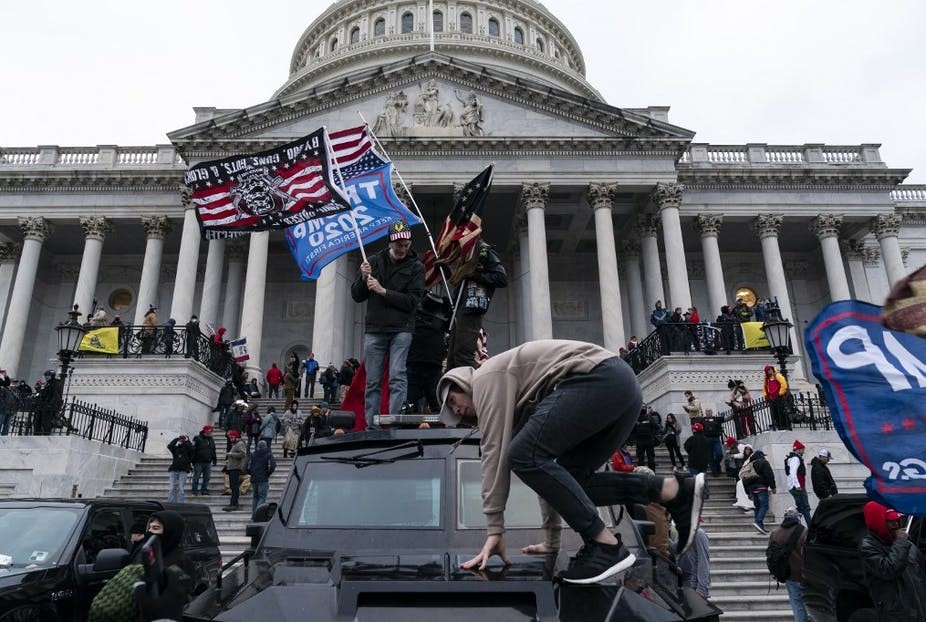 In a democracy, assaults on parliament don’t portend anything good, especially if they are never repudiated or reckoned with, but remain as dangerous precedents. This is the feeling one is left with on the anniversary of the first attempted coup in the history of the United States, an anniversary that sees the country divided and restless.

While the insurgency has failed, the fiction of “stolen elections” on which it was based is still widespread: 76% of Republicans say that Trump’s defeat was as a result of fraud, while 147 Republican representatives who a year ago voted to overturn the result of the election still sit in Congress.

For four years, Donald Trump has been eroding the democratic fabric of the country. Last January 6 made palpable the extent of the tear he has caused, perhaps irreversible. In essence, one of the two parties that make up the U.S. political system has repudiated the fundamental presupposition of democratic change: it has preferred radicalization over political discourse and conspiracy over dialogue. Not only on that day, on the tear-gas-choked steps of the Capitol, but in all the days that followed, as the GOP remained aligned behind the great lie that it kept promoting daily.

While the House investigative committee continues to work to uncover the background of the uprising and Donald Trump’s role in the attack on Capitol Hill, the strategy adopted by the party of the former president in view of the upcoming elections is already clear: disinformation to the bitter end, to exploit white resentment and paranoia once again.

In the flyover lands of the great melting pot, there is now a fight to the death rather than a political strategy: a religious crusade that does not allow for middle ground. Rather than a political one, the American crisis is now “epistemic”: the Trumpist narrative, full of alternative facts and delusional conspiracies, invalidates the once-shared reality with a deadly mixture of denialism, on both elections, the climate and Covid — the anti-scientific variant of populism that is the theme of the most discussed film of the year, Don’t Look Up. Demagoguery is fueling a cult that denies all evidence and refuses all compromise. Its adherents are a minority, but they are still tens of millions of people: for example, the 50 million voters who consider Biden an illegitimate president — a permanent reservoir of possible subversion.

On the other side, the predominantly urban and multiethnic coalition, proponents of the multicultural society long at the heart of the American idea, is penalized by the mechanisms of mediated democracy that favor rural states over popular majorities. Today, the Electoral College and federalism still remain tools for strategic vote suppression and manipulation. The last two Republican presidents have won the White House despite losing the popular vote — a plausible scenario for 2024 as well, when the Republican machine will deploy their proven tactics to bias the outcome. And if suppression, propaganda and lawsuits are not enough, this time the precedent — and the threat — of another January 6 will weigh heavily.

The most fitting models for comparison at the moment could be Weimar, or — speaking of anniversaries — the March on Rome: the kind of aggressively anti-democratic erosion that favors the rise to power of a minority faction which is ideologically fanatical. With the totalitarianisms of the last century, Trumpism also shares xenophobia, simultaneous attacks on migrants and “elites” and head-on attacks on the press. The idea of the existential clash between patriots and “impostors” (which once was called Blut und Boden) is being openly advocated by ideologues who rail against “racial substitution” from the pulpit of conservative broadcasters. The idea of a “cleansing” civil war is an integral part of the far right in America. Now, however, there is also a growing body of scholars and experts who consider a coming conflict plausible, noting that, as with the climate emergency, the window in which one can avert it is closing.

What shapes might such a conflict take? In the latest poll, 34% of Americans said they viewed political violence as justified. This worrying figure becomes disturbing in light of the more than 400 million firearms dispersed among the population. This pessimism is echoed by the Institute for Democracy and Electoral Assistance, which recently included the United States among the list of “regressive democracies” with “authoritarian tendencies.”

The model is already being tested in Texas, Florida and other Republican-run states, which in recent months have banned abortion and vaccine mandates, purged libraries and even locked down “their” international borders. Meanwhile, this week Trump reiterated his support and admiration for Viktor Orbán — a hint that the Hungarian model of securitarian, ethno-nationalist authoritarianism could also become that of a post-democratic America.

Time is running out, and the options are becoming fewer and fewer. For the Biden administration, with its slim majority, the decisive battle will be played out in the coming weeks over electoral reform.

The follies of US, UK in Russia-Ukraine conflict