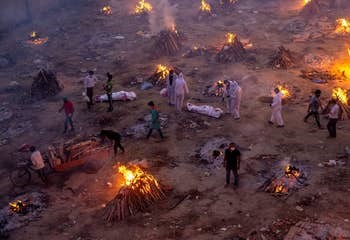 Narendra Modi’s attempts to censor the news and massage death rates can’t hide his failure to prepare India for its disastrous second COVID wave. Indians are dying, and so is the prime minister’s ‘strongman’ image

Just as England vaccinated 95 percent of their over-50s, Israelis finally emerged out in public without masks, Australia and New Zealand established a trans-Tasman travel bubble, in India the contrast could not be starker.

India is reeling under the deadliest wave of COVID-19 that the world has yet seen. Over the past week, India accounted for about a third of all new daily cases of COVID-19 worldwide. On April 21, the nation reported over 300,000 new cases for the first time – the highest single-day rise recorded in any country since the start of the pandemic. Just days later, new daily cases had jumped to nearly 350,000.

India’s social media is awash with posts and tweets documenting unending suffering. Children are pleading for ventilator beds and blood plasma for their parents; others search desperately for oxygen cylinders. Death doesn’t even end the torturous scramble for resources: Because of the unprecedented number of bodies, relatives are forced to wait for long hours at crematoria, in order to at least give their loved ones a respectful farewell.

The supply of oxygen, the most basic requirement for treatment, is so critically low that hospitals have turned to the court system to force the Modi government to increase its supply.

The Delhi High Court pulled up the government in the harshest possible terms for the shortage of oxygen cylinders, dismissing its claims of a meager increase in oxygen supply in Delhi as a mere “paper exercise.” Shockingly, the Solicitor General then admonished the Delhi authorities, telling them not to be “a cry baby.”

What makes India’s tragedy so much harder to accept is that its government had plenty of time and opportunity to prepare for these challenges. India escaped the first wave of the pandemic last year without overwhelming suffering; there were long months to prepare, including warnings from other ravaged countries, before this second wave hit.

Yet, for much of the last several months, India’s public discourse was busy with unfounded celebration, led by a triumphalist television media which prioritized jingoism over interrogation. In public addresses, Modi declared that India had “won” its war against COVID.

Instead of investing in vital equipment and hospitals, the government went ahead with plans for a swanky new parliament, costing almost $2 billion, according to some estimates. By contrast, it took eight months to invite bids for new oxygen plants, which were budgeted only one-seventh that amount.

Drowned out by the public triumphalism were the voices of experts, who have long cast serious doubts over the government’s transparency and effectiveness in preparing for another COVID wave.

As the pandemic struck last year, Modi launched a new, crowdsourced fund called PM-CARES. He chose to set up the fund as a private entity, rather than part of the public treasury, thus denying constitutional authorities, such as the Comptroller and Auditor General of India, all and any oversight, leaving the public blind about the contents and use of the fund. In place of accountability, PM-CARES issues irregular, anecdotal press releases, claiming funds have been used for oxygen cylinders and vaccines on an ad hoc basis

Meanwhile, several states have released suspicious data on deaths from COVID. In the city of Bhopal, for instance, the number of COVID-19 victims cremated was a whopping 24 times the official coronavirus death count. According to official figures based on unreliable data like this, nearly 200,000 Indians have now died of COVID. The real death toll, therefore, is far worse than those numbers tell.

India’s much-vaunted vaccination program has also suffered serious strains, arising from questionable decision-making. Well into March, India continued exporting (for both profit and for geopolitical leverage) more vaccine doses than it was administering at home, with Modi claiming the exports proved that India had emerged from the pandemic as a world leader and source of hope for humanity.

Notices about the shortage of COVISHIELD, a coronavirus disease vaccine manufactured by Serum Institute of India, outside a COVID-19 vaccination centre in Mumbai, India this monthCredit: FRANCIS MASCARENHAS/ REUTER

As a result, four months into its vaccination drive, India’s vaccination rate per capita was among the lowest for all major economies: 7.4 percent. The problem was compounded by the government’s highly centralized approach to vaccine procurement and distribution, which left state governments and private hospitals hamstrung until very recently.

Meanwhile, instead of ensuring public funds flowed to vaccine manufacturers upfront to ensure they established their capacities to make vaccines available and affordable, the Modi government bulldozed them to cut costs from the start, meaning fewer vaccines were produced, and the unfeasibly low price the government paid them for vaccines meant the manufacturers passed on their true costs to state governments.

That has created the current crisis in which hospitals run by the central government can obtain vaccines made by the Serum Institute of India – which accounts for about 90 percent of the vaccines administered – at 150 rupees ($2) per dose but the financially weaker state governments must pay 400 rupees ($5.34) per dose for hospitals they manage. That far exceeds the price of the same vaccine in the UK, the U.S. and Europe.

Elsewhere, politics has only served to make things worse, as Modi has attempted to appease his Hindu supremacist vote bank.

Despite the surging second wave starting as early as in February, the government greenlighted a truly massive Hindu religious gathering, the Kumbh Mela, where a million celebrants gathered every day without masks or social distancing, with 4.8 million participants in the two main Ganges immersion rituals. Thousands have since tested positive.

The super-spreading didn’t end there. The authorities refused to delay multiple state elections, or to ban crowded rallies – and they have been taking place, as COVID deaths spike, with no social distancing or other anti-infection protective measures.

In one rally in the state of West Bengal, as recently as last week, Modi even bragged that he had “never ever seen such huge crowds at a rally.” The Election Commission decided to stick to a long drawn out polling schedule in that state, stretching as long as eight phases, despite pleas from the opposition that lives were at risk.

Elsewhere, the lingering specter of communal politics has continued to haunt Indians. In Modi’s home state of Gujarat, some leaders of the ruling Hindu nationalist Bharatiya Janata Party (BJP) objected to the presence of Muslim volunteers who were helping out at a Hindu crematorium.

Many of India’s now catastrophic COVID challenges should have been headed off by its vibrant democratic traditions, and by its checks and balances, but they have failed.

The centralized approach to vaccination was at odds with India’s traditions of federalism. Public auditing of funds by independent state functionaries has long been a well-established custom, until PM-CARES pointedly denied it. The vibrant questioning of authorities by the media should have helped bring greater transparency on India’s situation, far before the latest wave took grip.

The government calls on diaspora to provide financial support

Will Mankind Be Extinct In A Few Years?