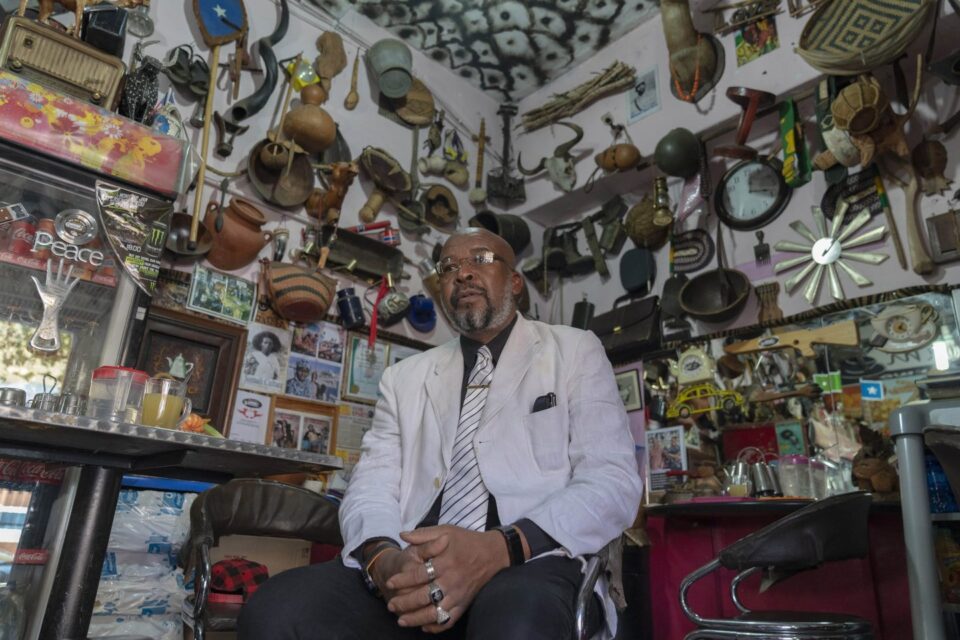 Standing in his empty coffee shop in Mayfair, Johannesburg, with two plastic tables stacked on top of each other in the doorway, Ibrahim Mohamed Ali, 54, shrugs when asked how business is going.

“It’s been very difficult. I am just trying to survive now,” Ali says. His coffee shop, Ebrahim Qaxwo (Qaxwo being a type of Somali coffee), has taken a serious hit during the Covid-19 pandemic.

It is a small space, with Somali souvenirs lining the walls, from musical instruments to flags and posters of famous Somali people. Before the pandemic, mostly men from the local neighbourhood would squeeze in, or fill up the tables and chairs outside on the pavement, for a taste of Ali’s coffee and a bite of the fresh Somali spiced cake, coconut cookies or kac kac (a fried bread similar to amagwinya).

These days, Ali sells second-hand clothes from the pavement while the coffee shop has gone quiet. It has been especially quiet since Ramadan started two weeks ago. But he remains hopeful that things will pick up again and that his business will survive the pandemic.

“I came here with very little. I worked hard and I made my business. I will continue to work hard,” he says.

It has been this resilience that has seen Ali survive in South Africa through multiple hardships, with Covid-19 being merely the latest hurdle for him to jump.

When he left Somalia in the late 1990s, Ali travelled through Tanzania, where he worked for a bit, and later through Zambia before settling in South Africa in 2000. “First it was just me, and I worked hard and then I sent some small money home. Then my family joined me in South Africa. They came like half and half because I didn’t have enough money for them all to come the same time,” he says.

When Ali first arrived in South Africa, he struggled to find work. “My experience is as a panel beater and a spray painter. But when I came here, I couldn’t open a panel-beater workshop because it is so expensive. You need the paint, a spray gun, gas, a welding machine and so on. All of that is so expensive,” he says.

“I started slowly-slowly. If one door doesn’t work, I help. If a boot didn’t work, I will help fix. And eventually, my one friend who was an electrician and another guy was a mechanic. They were suffering like me, but I called them and we opened a small workshop. We work on one car or two cars at the most,” he says.

The first workshop they opened had barely enough space to work on one car. They had to work on other cars outside. As their small business grew, they were able to move to larger premises and take on more clients.

“I tried my best and we worked slowly-slowly, and then we opened a bigger workshop and we continued there,” he says. “In 2006, I find a workshop there by Miriam Makeba Street (in Newtown). I moved there. We had an office and two rooms, a nice yard and if you close it is very safe.

For two days, he heard nothing from his brother while he was sheltering with his wife, their children and many other Somali shopkeepers who fled from nearby townships where the xenophobic violence was spreading. In the May 2008 attacks in Gauteng and parts of Durban, more than 60 people were killed.

Worrying about his brother, Ali decided to go to the workshop. “When I go to check on my brother because two days we never hear from him. When I got there, the door is closed but not locked. I knocked and no answer. My son went inside, he was crying,” he says.

“Two days my brother was alone there. People broke inside and they killed my brother and took all the cars and all the tools. They took everything.

Ali says he got in touch with family in Somalia to find out if his brother fled South Africa. “I phoned people in our country, and I phoned in the countries I came from. I phoned in Zambia and Tanzania where I lived. No one knows what happened to him,” he says.

“Even up to today, I can’t pass there by Miriam Makeba Street. It is too painful for me.”

After the 2008 xenophobic violence, as Ali was picking up the pieces and trying to rebuild his life, he started selling Somalian coffee in Mayfair. “I started with a flask and two cups. The first day, I only sold one cup of coffee. The next day I sold two cups and after that I sold the flask. That is where I started,” he says.

In 2009, he was able to open Ebrahim Qaxwo in Mayfair. For a brief time, it did so well that he opened cafes in Pretoria and Durban, but closed them because of high running expenses.

His coffee shop has allowed him to provide for his family. And despite the struggles he has endured under the pandemic, he says he will keep working hard to make the business work.

Dadaab, Kakuma camps to close in 2022