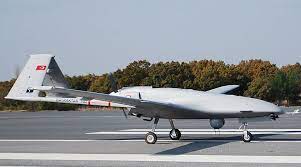 Turkish President Recep Tayyip Erdoğan is pursuing an ambitious goal. In order to realize Turkish great power fantasies, Turkey is not only developing an armory of international standing, but also wants to join the circle of the world’s preeminent military powers in the next few years. The construction of a light aircraft carrier as a supra-regional operational platform serves this goal.

In the near future, Turkey sees its warships, painted in light gray camouflage and flying the red flag with a white crescent moon and star, sweeping the Aegean, the eastern Mediterranean, and the Black Sea. Its navy, however, can also operate in parts of the Atlantic and Indian Oceans. The idea of the “blue fatherland” and the vision of transforming the Turkish coastal navy into a powerful ocean-going fleet serve as motivation to do so.

At the heart of this plan is the construction of the landing helicopter dock (LHD) TCG Anadolu (Pennant number L 400), which the Sedef shipyard in Istanbul Tuzla is currently working on. With a length of almost 231 meters, a height of 58 meters, and a displacement between 24,660 and 27,436 tons, the TCG Anadolu will be the largest warship ever built in Turkey.

Even if the actual Turkish contribution is 68 percent, the ship’s design represents an adapted replica of Spain’s Juan Carlos I-class, an export hit also used by the Australian Navy for its two helicopter carriers, HMAS Canberra (L 02) and HMAS Adelaide (L 01).

Originally designed as a helicopter carrier, Turkey changed the order in 2015 to an aircraft carrier with a ski jump, a familiar design from Chinese, Russian, Indian, and British aircraft carriers. The aircraft originally envisioned was up to 12 hyper-modern US F-35B Lightning II with vertical take-off. However, the United States removed NATO partner Turkey from both the customer list and the list of participants in the joint strike fighter program after Ankara acquired the Russian S400 air defense system.

With the consequence that no suitable fighter aircraft will be available for the foreseeable future, Turkey seemed headed for an embarrassment. But domestically developed military drone technology pointed a way out: In just one week in March 2020, Turkey was able to inflict extensive losses on the Syrian army using drones and novel military tactics. In Libya, too, the new Turkish military doctrine achieved a stalemate against General Haftar’s rival government in Tobruk, and in the battle for Nagorno-Karabakh, it was not least Turkish drones that led Azerbaijan to victory against Armenia.

Making a virtue out of necessity, the TCG Anadolu, currently under construction, is now being converted into the world’s first drone carrier. Plans call for 30 to 50 drones to be used for spying, surveillance, identifying targets, or for armed attacks. Just in March, Haluk Bayraktar announced that Baykar is planning to develop the TB-3, a combat drone intended for dedicated use with the drone carrier, within a year.

However, there are still numerous technical hurdles to overcome. For example, the ski jump alone exerts a limiting effect on the weapon load and range of an aircraft that should not be underestimated. In addition, folded wings, which Turkish drone models do not yet have, could be required for on-board use, as well as resilient holding devices for landing on the deck. Moreover, maritime drones are exposed to the sea air and harsh demands on bodywork, wheels and landing gear. In addition to the planned use of drones, the Head of the Presidium of the Turkish Defense Industry (SSB), İsmail Demir, also mentioned the use of helicopters and the Hürjet, a light, single-engine combat aircraft under development, from the deck of the carrier.

Ultimately, the question of the purpose of a drone carrier also arises. The ship can embody Turkish self-confidence and prestige, and act as a threat. But in military terms, its success is likely to be limited. The TCG Anadolu can indeed perform the tasks expected of a multipurpose ship in the event of an amphibious assault. To do so, however, escort ships must be made available in sufficient numbers to form a carrier battle group.

The Turkish drone concept works primarily against an adversary that lacks a strong and interconnected air presence. Thus, the drone carrier is not a substitute for the capabilities forfeited in Turkey’s exclusion from the F-35 program.