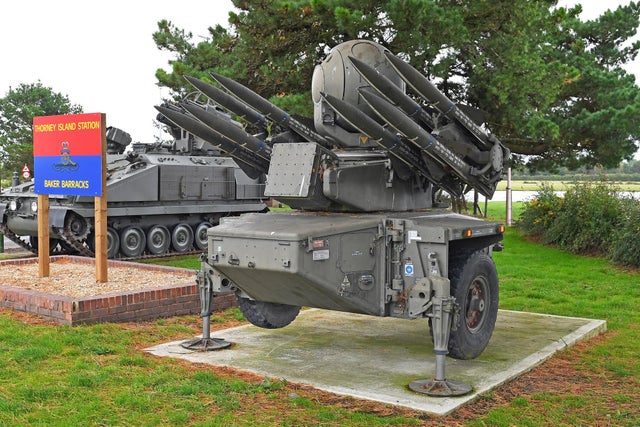 Soldiers from 16th Regiment, Royal Artillery, have been deployed to Saudi Arabia to protect oil fields in the island following a large-scale drone attack last year. Pictured is the entrance to Baker Barracks, on Thorney Island, where the troops are based.

The government deployed British troops to defend oil fields in Saudi Arabia without telling parliament or the public, it can be revealed.

Opposition parties accused the government of lacking a “moral compass” and dodging scrutiny, while campaigners said the episode was “symptomatic of the toxic relationship” between the UK government and the oil-rich autocracy.

The Ministry of Defence says the oil fields are “critical economic infrastructure” and that gunners from the 16th Regiment Royal Artillery were needed to help defend against drone strikes.

Incredibly, the military operation, which was launched February in this year, overlapped with a ban on exporting military hardware to the middle eastern dictatorship.

Until July ministers were blocked by the Court of Appeal from signing-off military exports because of concerns that Saudi forces were committing war crimes in their conflict with rebels based in neighbouring Yemen.

Legal action is ongoing in British courts to reinstate the ban, which ministers discarded in the summer after judging that the 500 alleged war amounted only to “possible” breaches international humanitarian law and “isolated incidents”.

A Ministry of Defence spokesperson told The Independent: “Following the attacks on the Kingdom of Saudi Arabia’s oil production facilities on 14 September 2019, we have worked with the Saudi Ministry of Defence and wider international partners to consider how to strengthen the defence of its critical economic infrastructure from aerial threats.”

The spokesperson confirmed that the deployment had included an advanced military radar system to help detect drone strikes, but would not be drawn on “exact timescales or the numbers of personnel involved due to operational security”.

No response was provided to questions about why no announcement had been made in parliament or elsewhere about the deployment of British troops.

Layla Moran, the Liberal Democrats’ foreign affairs spokesperson told The Independent: “The reports that the Government have secretly been deploying troops to Saudi Arabia are shocking.

“Not only is this Government selling the Saudi government arms to use against civilians in Yemen, but deploying troops to defend Saudi oil fields, reveals just how absent this Government’s moral compass truly is.”

She added: “From scrapping development spending and turning its back on those most in need, to aiding and abetting atrocities, Conservative ministers continue to sully the UK’s international reputation. Ministers must come to Parliament and explain how this decision was taken, and why the British public were not informed.”

Labour’s shadow armed forces minister Stephen Morgan said the government was “shirking its responsibility” to keep parliament and the public informed about the operation.

“Parliament has got to be kept informed on non-covert operations such as these to ensure proper parliamentary scrutiny and transparency can take place,” he said.

“In this case this has not happened and Government must do better as this is once again yet another example of its incompetence.” The news of the deployment was first reported by The News, the local newspaper for Portsmouth, where 16th Regiment Royal Artillery is based.

On 14 September 2019 two Saudi Aramco oil processing facilities in Abqaiq and Khurais, localities in the east of the country, where targeted by a drone strike, causing significant damage to them and temporarily disrupting the production of oil.

Houthi rebels based in Yemen claimed responsibility for the attacks, but US and Saudi officials say Iran is responsible, a claim which Iran denies.

Nobody is thought to have been killed in the raids, but they caused the Saudi Arabian stock market to plummet sharply, led to dramatic fall the country’s oil production, and hundreds of millions of dollars worth of damage.

The deployment of troops is the latest escalation in the role of UK military personnel in the Kingdom. Ministers say UK armed forces have provided at least 42 training modules for Saudi forces since 2018, including in air warfare, officer training, and electronic warfare. According to a recent investigation by the Declassified UK website, British personnel are stationed across 15 sites in Saudi Arabia.

Since the Saudi bombardment of Yemen began in March 2015 the UK has licensed at least £5.4 billion worth of arms to the country’s regime, including bombs and aircraft. The UN says the bombardment has led to a humanitarian catastrophe.

Saudi forces are intervening on the side of the country’s internationally recognised government, though its grip on large swathes of the country, including its capital is largely notional.

Andrew Smith, from Campaign Against the Arms Trade, which is leading the legal challenge against UK sales of arms to Saudi Arabia, told The Independent: “This secretive and opaque operation is symptomatic of the toxic relationship between the UK government and the Saudi Arabian authorities.

“It shows the level of integration between the two, and emphasises the lengths that Boris Johnson and his colleagues will go to in order to maintain it, regardless of the destructive consequences.

“There are big questions about this operation and why UK forces were deployed, but the entire relationship needs to be scrutinised. Despite the decades of abuses that have been inflicted on Saudi people, and the war crimes and atrocities committed against Yemen, the Saudi regime has always been able to rely on the uncritical political and military support of Downing Street.

“The bombing of Yemen has created the worst humanitarian crisis in the world. It would not have been possible without the complicity of arms dealing governments like the UK. With UK aid budget being cut, and COVID making the humanitarian situation even worse, it is more vital than ever that those arms sales are stopped.”