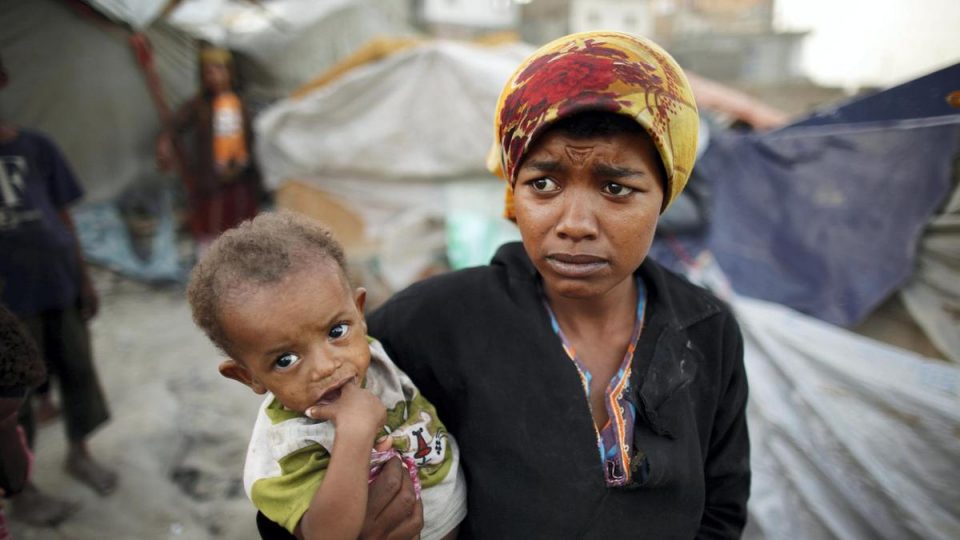 Her leg was smashed by a hit-and-run driver, but no one stopped to help until people from her ethnic minority – known as Al Muhamasheen, or “the marginalised” – arrived.

“A young man driving a motorcycle crashed into me while walking in the main street and escaped,” said Ms Ali, 52.

“I kept screaming and shouting for help, but all the passers-by ignored me until some neighbours from our community rushed me to hospital, where I had surgery to repair the fracture.”

Members of her community, also referred to as Al Akhdam, or “the servants”, suffer deep-rooted social discrimination in Yemen.

The National met the mother of five near her shanty home made from scrap in the village of Sanah in northern Al Dhalea, now a front line in Yemen’s civil war.

Ms Ali sat in the dust with her broken leg stretched out, selling the potato soup she cooks to support her children.

Systematic discrimination against the minority has increased since the war started in 2014.

There are no official statistics on the number of Al Muhamasheen in Yemen.

Noaman Al Hothaifi, head of the organisation Marginalised People in Yemen, said they are 12 per cent of the population, while the UN reported there are as many as 3.5 million members of the minority.

Wherever they go in Yemen, Al Muhamasheen are mistreated and oppressed.

At schools, their children are bullied by pupils and teachers, who treat them as servants.

An underclass for centuries

“Our sons don’t go to school any more because they were mistreated and exposed to harassment,” Gubran Ghalab, who lives in Qatabah in southern Yemen, told The National.

“My son used to go to the school near by, but he stopped because teachers made him clean the class every day, otherwise his teacher would beat him.”

The suffering of Al Muhamasheen goes back centuries and includes systematic oppression and mistreatment by other social classes and by government authorities.

“The current war has greatly affected the whole community in Yemen, but the situation for the marginalised people was much worse,” Mr Al Hothaifi told The National.

“The conflict forced the majority of our community to flee their permanent slums, especially in provinces where war erupted, such as Sanaa, Taez, Hodeidah, Al Jawf, Al Dhalea and Marib, to seek shelter in other provinces.

“The social discrimination that has been practised against our community for centuries has greatly complicated our dire situation during this war.

“Our people weren’t allowed to join the [internally displaced people’s] camps occupied by people with tribal links, and such discrimination made it harder for our community to access humanitarian assistance.”

With limited resources, displaced Al Muhamasheen set up their huts in remote, unsafe places. Some of those were close to the front lines.

Other settlements can be found near rubbish dumps. They lack the basic amenities.

“Many of them moved to shelters in state institutions including public schools,” Mr Mohammed said.

“But for us in the marginalised community, we had to find our own camps because our life doesn’t matter to anybody in this country.

“Even in this self-established camp we aren’t secure because the landowner repeatedly comes and threatens us either to pay him rent or to leave his land.

“We lack the basic needs of life such as clean water and suitable shelters. When it rains, the camp turns into a swamp.”