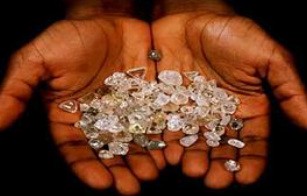 The continent of Africa endows a large amount of natural resources that has been extracted and exploited for centuries. However, many African countries still rank among the poorest nations on the globe.

The exploitation and sale of their natural resources to western corporations have not helped Africans escape poverty.

In addition, there are social issues, economic issues, and environmental issues that evolved over time from the sale and exploitation of resources. This is called the Resource Curse. The NRGI (National Resource Governance Institute) defined the Resource Curse as “the failure of many resource-rich countries to benefit fully from their natural resource wealth, and for governments in these countries to respond effectively to public welfare needs.” (Davis) It is important to evaluate whether corporations should be engaging in transactions with governments that have no intent to serve its citizens with revenues of natural resources. But then some people might argue that despite governments failing to serve the people, the economic vitality of these nations highly depends on their natural resources; consequently these transactions are indispensable. However, a civic virtue required government officials to put the interests of its citizens first.

Government service requires prioritizing the interest of the people. Many governments of these resource-rich nations violate the social contract between them and the people. The natural resources of a country are the propriety of those who hold the title of citizen. The citizens give up their right to these resources hoping that it is in their best interests. Oftentimes however, the government appointees rob them of these goods and sell them to western corporations, and the sale price usually does not reflect the true value. Greedy officials divert the public revenues, and promises to improve the living conditions of the people are never met. Over time, anger and frustrations grow among the people. Therefore, backlashes erupt which often lead to civil war, clashes between clans, distrust of the government and coup d’états. Amid these events, the countries plunge in an economic, social and leadership crisis. Public goods and businesses are damaged; many industries end up pulling out of the country for safety purposes. But for some other corporations, it is actually an opportunity to rob resources by corrupting officials and shipping out the most while the country is in crisis. (Want evidence? Check out these case studies )

If African governments do not struggle for its people, then foreign companies have no interest in doing so. Instead they seek where the interest fit the best and go as far as engaging in fraudulent activities with government officials. Corporations target unstable and economically poor nations. Poverty and lack of education are few of the many causes of this corruption. The corruption, occurring at all levels, greatly destabilizes the economy of these underdeveloped countries. Since many of the western companies highly depend on the raw materials of the continent. Therefore, they play in the different forms of corruption. The most common is the bureaucratic corruption, it is when officials of government establish laws and policies through the political system to accumulate wealth for themselves. In many case, corporations bride the officials to implement policies that would help them access the natural resources of the land easily and at cheaper prices. This shows to what extent these companies care less about the prosperity of the people.

The destiny and prosperity of these poor nations highly depend on the act of their governments. In such growing economy around the world, economic competition with other nations is literally impossible for these poor nations. There are also ecological impacts that originate from the extraction of resources, which may affect the health and living conditions of the people. The government should compensate for this practice and ensure that their citizens are not negatively impacted, but this never happens. It is of my belief that theses failing governments are the main cause of the resource curse. If government appropriately utilizes their authority and executes their mission, these nations will see an economic growth instead of a downturn. And also, the authority and power of these governments will grow on the world stage.

To solve this problem, it is necessary for African nations to collectively undertake a different path. They must understand in either case they are the losing team because their economic growth is undermined and there are environmental issues that will evolve over time. Institutions, laws and policies can change the course of things. A first step would be to create a regional group of the African countries affected by the resource curse. Just like the U.S, they would impose a windfall profit tax, review and renegotiate contracts to maximize their benefits; all revenues from natural sources should only be used for public development. Required that natural resources be processed before heading out so there are jobs available to the people. As once Joseph L. Stiglitz said

“resources should be a blessing, not a curse. They can be, but it will not happen on its own.”

A small change can always make a big difference.