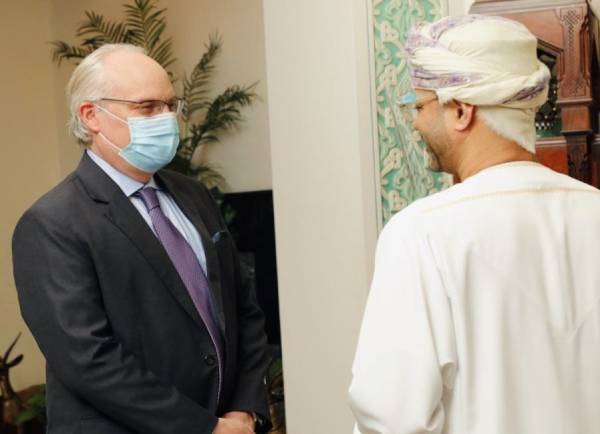 Efforts to end the war in Yemen await an Iran deal

Ahmed Mostafa , Wednesday 31 Mar 2021
The Omani capital Muscat has been busy with diplomatic traffic aimed at finding a way to end the six-year war in Yemen. Both UN Envoy Martin Griffiths and US Special Envoy Tim Lenderking have been shuttling between Muscat, Riyadh and Aden since Saudi Arabia proposed a new peace initiative last week.

Saudi-Omani relations have recently improved, with Oman eager to end the conflict across its border. Sources in Muscat say Oman is playing the role of fair mediator supporting international efforts to reach a political solution. Iran-backed Houthi rebels will only trust Omanis as an honest broker.

Earlier last week, Saudi Arabia proposed a peace deal that would end the war in Yemen if the Iran-backed Houthi rebels agreed to it. The Saudi proposal calls for a nationwide ceasefire, reopening the airport in the Yemeni capital Sanaa and allowing ships into Hodeidah Port. The Saudi Foreign Ministry said in a statement: “The initiative aims to end the human suffering of the Yemeni people, and affirms the kingdom’s support for efforts to reach a comprehensive political resolution.”

The Saudi initiative was welcomed by all parties, and Saudi Foreign Minister Faisal Bin Farhan Al Saud received a supportive call from US Secretary of State Antony Blinken. The Houthis’ response was initially cold, but they have since given mixed signals about negotiating. Meanwhile, they intensified missile and drone attacks on Saudi Arabia.

The Houthis intially said the initiative provided “nothing new” as it still fell short of their demand for a complete lifting of the blockade on Sanaa airport and Hodeidah Port. Houthi chief negotiator Mohamed Abdulsalam told Reuters, “we expected that Saudi Arabia would announce an end to the blockade of ports and airports and an initiative to allow in 14 ships that are held by the coalition… A humanitarian right should not be used as a pressure tool.”

Following the Saudi announcement of the peace initiative, Saudi-backed government of President Abd Rabbu Mansur Hadi allowed four ships into Hodeidah Port. The Houthis said they would continue to talk with the Saudis, the United States and Oman towards a peace agreement.

Hadi’s internationally recognised, legitimate government and the Houthis both proposed more details for the implementation of the initiative of the UN and US envoys to reach a compromise. It seems the Houthi rebels realised they will be seen as the party opposing settlement, after the US and other European countries blamed them for rejecting the peace offer.

The new initiative has a better chance of success than the UN-brokered ceasefire of late 2018, which did not last long. Yet some commentators are not so optimistic, thinking any political settlement in Yemen depends on how Iran and US progress in the efforts to revive the Iranian nuclear deal.

The Saudi commentator Abdul-Aziz Al-Khames told Al-Ahram Weekly that Iran is the party to blame for foiling peace efforts. “The Houthis are the main obstacle to any political settlement in Yemen. They are not open to any compromise. The legitimate government is willing to compromise and provide concessions, the Houthis are not,” Al-Khames said. “It is not in the interest of Iran to stop the war in Yemen. They do not want a ceasefire or a political solution as they thrive on the conflict. That is why they are pushing their proxy, the Houthi militia to reject peaceful initiatives.”

Since the start of Saudi-led coalition’s intervention in Yemen in March 2015, to support an internationally recognised government led by Hadi in the face of Houthi military campaign, the coalition repeatedly acknowledged that there is no military solution to the conflict. “The only path to political settlement is to include the Houthis in an inclusive government. The government is willing to share power with the Houthis, but the Houthis are not. In fact, Saudi Arabia is willing to go for that power-sharing settlement, but Iran is not. That is why the Houthis are foiling peace,” Al-Khames said.

In a Guardian piece, former UN special envoy to Yemen Jamal Benomar concluded that Saudi Arabia is seeking the Houthis’ complete surrender, while the Houthis want control of the country. “For six years, these surrender ultimatums have manifestly failed. Yet despite Joe Biden’s ‘Diplomacy is back’ announcement, they continue to form the basis for the United States’ preconditions for talks, as well as for the Saudi-proposed peace initiative this week. With an identical approach of ‘you must blink first’ laid before the Iranians over nuclear talks, the US is in danger of leading itself into impasses in more than one of its dealings in the Middle East.”

The Moroccan diplomat resigned from his position in 2015 after being accused by the coalition of siding with the Houthis and Iran. In 2017 he was sued in the US for acting as undeclared agent for Qatar, including during the time he worked for the UN on Yemen. Despite his claim that the Americans are adopting the coalition’s preconditions for settlement in Yemen, the coalition is wary of the American approach.

“The Americans do not have a strategy for Yemen or any other issue in the region. They are mainly focusing on Russia, China and Iran. The Chinese are complicating it for them, as they now signed this partnership agreement with Iran giving them even more military presence in the Gulf region… This American administration came with a prior conception that the Saudi position is the issue, so let’s pressure Riyadh. They don’t realise it is a two-way issue: Saudi and Iran,” Al-Khames told the Weekly.

Only one thing Benomar mentions in his Guardian article is hopeful: “As I know from personal experience, when Yemenis start talking anything is possible.” This, thanks to Muscat, is what seems to be happening.