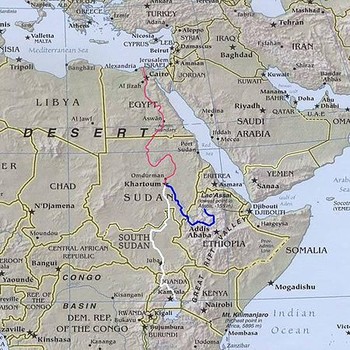 The Nile and its tributaries (wikipedia)
July 12 – 2020 KHARTOUM

Sudan, Ethiopia, and Egypt will submit a report to the African Union (AU) concerning their negotiations on the Grand Ethiopian Renaissance Dam (GERD). So far, no breakthrough has been reached.

On Wednesday, the legal and technical teams of the three countries discussed the filling and the operation of the mega-dam in the future, in particular in times of prolonged drought.

The legal framework concerning the use of Nile water by the three countries in relation with former water agreements on the Nile Basin was discussed as well, in addition to future development projects on the Blue Nile which contributes approximately 85 per cent to the volume of the main Nile River.

The Sudanese Ministry of Irrigation and Water Resources announced in a press statement on Thursday that the Sudanese, Ethiopian, and Egyptian ministers of irrigation and water resources agreed to submit a progress report to the AU on Monday.

The ministry said that the talks were attended by experts and observers from the AU, the EU, and the USA and the European Union, with the aim of bringing together the different points of view on the remaining legal and technical issues, “to reach an equitable and binding agreement for all parties”.

On July 3, tripartite negotiations on the dam resumed under auspices of the AU. Several issues still cause dissension, especially between Egypt, that relies on the Nile for more than 90 per cent of its water, and Ethiopia, which wants to extend its power grid.

The main point of dispute constitutes the filling of the dam’s reservoir. Ethiopia intends to fill the lake in seven years or less. Egypt wants to make it last 12 to 21 years, to protect its water supplies, and demands guaranteed access to adequate water quantities in case of a drought while the reservoir is being filled.

Addis Ababa says it will start filling the reservoir in July, even without an agreement. Cairo however has repeatedly warned Ethiopia that it will not be able to unilaterally fill the dam without consequences.

Since colonial times, Egypt has held the major ownership of the water from the Nile River. It managed to prevent Ethiopia from constructing its Grand Renaissance Dam until 2011, after the people in southern Sudan opted for secession from Khartoum in January. The legality of the older agreements on the Nile waters was to be rediscussedfollowing the secession of South Sudanthat took place in July that year.

In March 2011, Ethiopia announced its plans to build a large dam at the Blue Nile as a jointly funded, owned, and operated project between the three countries. Egypt and Sudan vehemently opposed the dam and ignored the proposal. They claimed adverse effects on their Nile water rights and interests. Khartoum later softened its position.