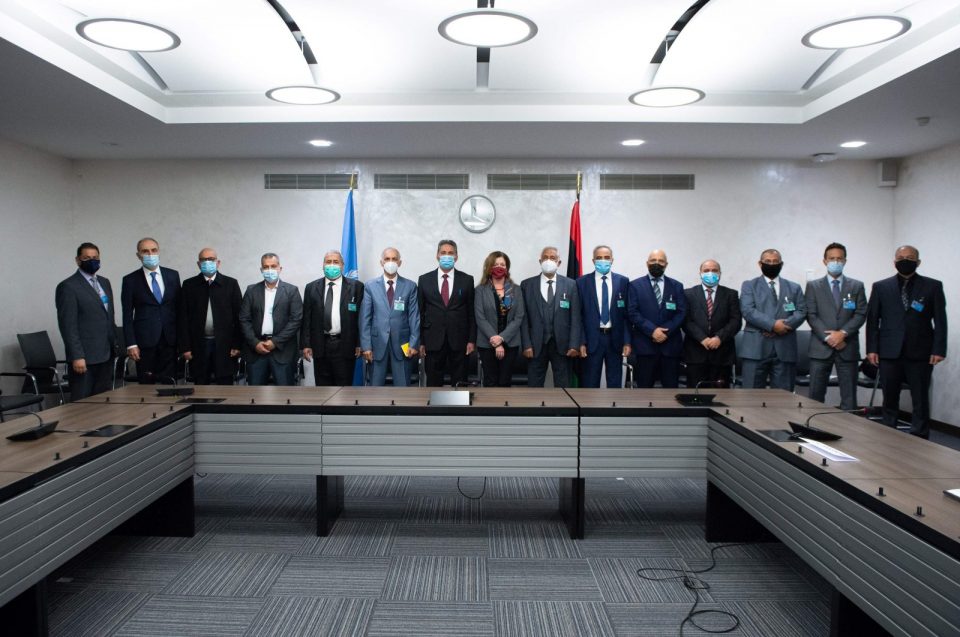 This handout picture released on October 19, 2020 by the United Nations Office in Geneva shows deputy special representative of the UN Secretary-General for Political Affairs in Libya Stephanie Williams (8R) and representatives of the rival factions in the Libya conflict wearing protective face masks, standing during the Libyan national anthem at the beginning of the talks in Geneva. (AFP Photo / United Nations / Violaine Martin)
Oct 23, 202012:36 pm GMT+3

Libya’s warring sides signed an agreement for “a permanent cease-fire in all areas of Libya,” the United Nations Libya mission said in a Facebook post on Friday, showing live video of the ceremony for signing the agreement in Geneva.

“The 5 + 5 Joint Military Commission talks in Geneva today culminate in a historic achievement as Libyan teams reach a permanent ceasefire agreement across Libya. This achievement is an important turning point towards peace and stability in Libya,” the U.N. mission said.

“The road to a permanent cease-fire deal was often long and difficult,” said Stephanie Williams, U.N. envoy for Libya, in a press conference in Geneva, noting that there’s a “great deal of work” to do in the coming weeks to implement the commitments. She expressed hope the agreement will succeed “in ending the suffering of Libyans and allowing those displaced by the conflict to return to their homes.”

Meanwhile, a commercial passenger plane flew from the Libyan capital Tripoli across front lines to the eastern city of Benghazi for the first time in more than a year on Friday after talks between the country’s warring parties in Geneva.

Flights between them had stopped in the summer of 2019 as shelling by putschist Gen. Khalifa Haftar’s eastern-based illegitimate forces targeted Tripoli’s Mitiga airport.

The Tripoli-based Government of National Accord (GNA), which is recognized by the U.N., drove the Haftar forces back from the capital in June.

However, both Mitiga and Benghazi’s Benina airport were by then mostly closed due to COVID-19 restrictions. The global pandemic has spread widely across Libya, with more than 50,000 confirmed cases and an official death toll of 768.

Since the GNA advance in June, frontlines have stabilized west of the central coastal city of Sirte and several diplomatic tracks, including the U.N.-brokered Geneva talks, have pushed for a lasting cease-fire.

Last month, the two sides reached preliminary agreements to exchange prisoners and open up air and land transit across the country’s divided territory. This breakthrough also accompanied the resumption of oil production after a months-long blockade by powerful tribes allied with Haftar.

Why peace with Khartoum would be true paradigm shift for Israel