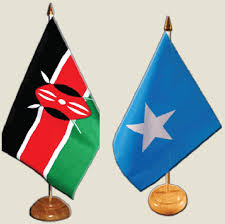 Somalia President Mohamed Farmajo on Tuesday called his Kenyan counterpart Uhuru Kenyatta to express his “regrets and convey condolences for the loss of life and property” following the crash of a Kenyan cargo plane in Baidoa, Somalia yesterday.

He invited Kenyan authorities to work with the Somalia Civil Aviation Authority to “complete the investigations expeditiously”, telling President Uhuru that he had already instructed his team to begin the probe. Kenya and Somalia have had strained ties following recent border disputes. The plane, an Embraer 120 twin-turboprop, operated by African Express, was carrying medical supplies for use in the fight against coronavirus pandemic.

All six on board, including two Kenyan pilots — Mabruk Sherman and Omar Chiraghdin—, died in the crash. Kenya’s Ministry of Foreign Affairs said President Uhuru thanked Farmajo for the call and accepted the invitation to work together. “The President welcomed President Farmajo’s invitation to Kenya’s civil aviation authorities to join in the investigation into the aircraft crash emphasizing the need to swiftly, but thoroughly conclude the process,” the ministry said.

Kenya Civil Aviation Authority, in an earlier statement, said the aircraft, 5Y-AXO, had been operating in Somalia since March 2, 2020. On Monday, it left Mogadishu with medical supplies headed for Baidoa where it landed at 1310hrs. It then left Baidoa for Berdale landing at 1600hrs and later departed for Bardere and crashed as it approached the airport.

“The firm’s operations officer confirmed having lost contact with aircraft at approximately 1620hr,” KCAA director-general Capt. Gilbert Kibe said. He said his agency was in communication with Somali Civil Aviation Authority about the incident, adding the crash was under circumstances they are yet to confirm.