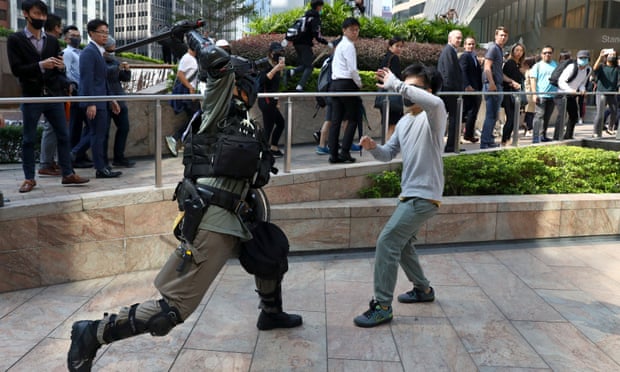 Hong Kong was paralysed on Wednesday, with riot police making arrests in a busy business district, much of the city’s public transport suspended and all universities closed following sharp clashes overnight with anti-government protesters.

Around lunch time, hundreds of protesters in office outfits took to the streets in Central, the city’s most prestigious business district, for the third day in a row. Bricks were strewn across the normally busy, traffic-filled thoroughfares as white-collar workers shouted slogans. Some held placards emblazoned: “Do not shoot our young people!”

As riot police marched through an area outside the Exchange Square, which houses the Hong Kong Stock Exchange, angry crowds cursed them and some threw objects. Police officers beat and subdued a number of people. Outside another prestigious office tower, a young man was seen bleeding from the head as officers flipped him over and tied his hands. Many in the crowds repeatedly shouted “Release him!” On a busy walkway, riot officers charged at the crowds, tackling around a dozen people to the ground as others fled.

On Wednesday morning, many metro and rail stations were closed after the protesters blocked commuters and vandalised trains. Classes were suspended at schools and universities. Groups of riot police were deployed around the city centre and outlying territories to try to contain fresh violence, as students at the out-of-town Chinese University of Hong Kong prepared for more clashes with police. Many were armed with petrol bombs while some carried bows and arrows, which students earlier grabbed after they broke into the university sports centre.

Primary and secondary schools sent children home late in the morning on police advice as protesters blocked major intersections in various districts with bricks and other objects, halting traffic across the city. Police cleared many of the barricades, but protesters replaced them soon after they left.

The Chinese-ruled city is experiencing its sixth month of protests, which was sparked by a controversial extradition bill but has morphed into a wider pro-democracy moveme

Days of unrest, which began with citywide strikes on Monday, is expected to continue. Hong Kong’s education bureau suspended classes for all schools on Thursday.

Quarrels broke out between emotional commuters who formed long queues at bus stops after many metro stops and lines were closed. Many bus routes were also cancelled as a number of roads were blocked.

At the Chinese University of Hong Kong, which has become a flashpoint for protests, black-clad protesters assembled on Wednesday morning.

They built makeshift barricades while setting objects on fire on a bridge where conflicts occurred the night before, fearing that police might return.

Police on Tuesday night fired multiple shots and rounds of tear gas at the campus and used water cannon on students, who retaliated with petrol bombs and bricks. Riot police ordered the university’s vice chancellor Rocky Tuan to leave earlier in the evening, saying it was “not time for negotiations”.

I don’t want to resort to violence, but peaceful protest doesn’t change a thing

On Wednesday morning, emotions were raw at the University of Hong Kong, as a small number of black-clad and masked students jeered at riot police from an area overhanging a thoroughfare.

Chairs, desks and park benches were piled up around entrances and doorways across the camps in an apparent effort to stop police entering. Graffiti messages such as “Whoever kills must compensate with their lives”, “blood debt must be paid” and “ideas are bullet-proof” were scrawled on boards, walls and floor across the campus.

These were referring to the death of Chow Tsz-lok, 22, a student who died on Friday after suffering brain damage following a fall during protests. It marks the first death from injuries sustained during anti-government demonstrations that have overtaken the city. Many students were outraged by the death of Chow and swore the police must repay the “blood debt”.

Several professors pleaded with police earlier not to enter the campus and said officers had promised as long as students refrained from throwing bricks onto the road. Professors also urged students not to take radical action. Some students appeared emotional, saying they were angered by police actions on university campuses.

“I feel totally hopeless – I don’t want to resort to violence, but peaceful protest doesn’t change a thing. I feel there is no future ahead of us,” said a masked medical student on condition of anonymity.

Police entered and fired tear gas at several universities for the first time on Monday, after anti-government protesters called for a citywide strike and caused widespread traffic disruption. Police chased protesters into campuses and argued that universities were not places where criminals could hide.

The city’s religious leaders appealed on Wednesday for an end to the violence and called on both police and protesters to show restraint. “At this very critical point, the people of Hong Kong must unite and say no to violence,” said a statement issued by the leaders of Hong Kong’s six major religious groups.