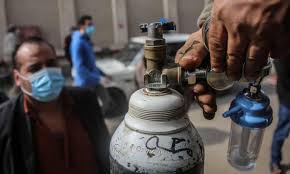 An oxygen cylinder is checked at the Gulf Gases Group factory in Nasr City oxygen cylinder before being sold to a customer whose relative is infected with Covid-19. Photograph: Fadel Dawod/dpa

Filming on his phone inside Egypt’s Hussainiya hospital, Ahmed Mamdouh pans around the ward to show beds occupied by motionless bodies. “All the people are dead,” he says. Mamdouh’s own relative had just died, for which he blames a lack of medical oxygen.

In another video, a screaming woman at Zeftah hospital in Gharbiyeh governorate demands nurses help resuscitate a relative. In a third, a man in Damanhour, in the Nile delta, gasps for air, glassy-eyed as he holds an oxygen mask in his hand. “There is a lack of oxygen,” he says, extending an invitation for local health minister to come and witness the problem. “Join us, minister.”

The footage has led to widespread concern in Egypt that there is a shortage of medical oxygen for Covid-19 patients as the country grapples with a rapid rise in infections and deaths. The government has denied any suggestion of a shortage, looking to reassure citizens during a pandemic that has been marked by a lack of accurate information – including about the level of vital supplies.

Medical oxygen is crucial for treating Covid-19. The World Health Organization estimates that one in every five Covid-19 patients “suffers respiratory distress sufficient to require oxygen therapy”. But the slightest issue with a hospital’s oxygen delivery system or the supply chain needed to refill oxygen cylinders – even something as benign as heavy traffic – can be fatal. Last week seven patients were rushed between the intensive care units of two hospitals in Sharqiya, after the oxygen delivery network failed.

Egyptian authorities moved quickly to quash the notion of oxygen shortages. The governor of Sharqiyah, Mamdouh Gharab, said four deaths at Hussainiya hospital were not due to a shortage of oxygen but complications from Covid-19, while accusing hospital security of being lax for allowing patients’ relatives to enter and film in the wards.

Sayed Rahmo, MP-elect of Sharqiyah, said five people had died as a result of staff negligence, claiming staff had mismanaged the depleted oxygen supplies. Public prosecutors later launched an inquiry into the deaths of seven patients at Hussainiya.

Egypt’s national news has repeatedly referred to an “oxygen crisis” in hospitals, while officials have blamed individuals for allegedly trading or stockpiling supplies. Al-Azhar, the highest Sunni Muslim religious institution, has issued a fatwa against “hoarding medical supplies”.

Health minister Hala Zayed insisted that there was no shortage of medical oxygen, while the ministry’s spokesperson, Khaled Megahead, said the government had installed a new electronic system to monitor the supply of hospital beds and medical oxygen around the country. Prime minister Mostafa Madbouly demanded that producers double production of medical oxygen.

“The main problem is that there’s a lack of trust in what the government says, which is the real issue,” said Ayman Sabae, head of the healthcare startup Shamseya. “When the health ministry says it wasn’t an oxygen problem, people doubt this for many reasons. These things occurred in hospitals run by the ministry of health, which is also carrying out an investigation [into the deaths]. Then there are conflicting messages: On one hand, the government is saying there’s no shortage of the supply of oxygen, then you see civil society organisations collecting funds and donating oxygen tanks.” 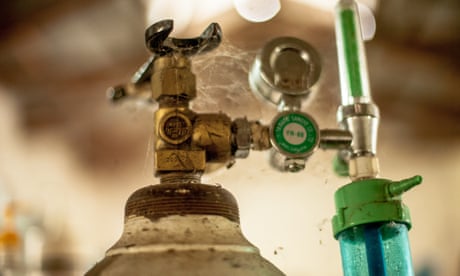 Ahmed Mamdouh, who filmed in Hussainiya hospital, was questioned shortly afterwards by security forces. Prosecutors also summoned the hospital director and four doctors for questioning. This month the health ministry suspended and disciplined the director of a hospital in Kafr al-Sheikh who appealed on Facebook for oxygen cylinders. The ministry later reversed his suspension, but not disciplinary proceedings. Last year, security forces detained at least eight medical personnel for discussing the government’s handing of the pandemic.

Concern about a lack of oxygen supplies during a second wave of Covid-19 highlights the struggles of countries across the Middle East and Africa. One medical supply specialist in Zimbabwe tweeted about a desperate search for oxygen cylinders. Reports from South Africa suggest that hospitals are attempting to increase the supply of oxygen before the expected peak of the second wave in mid-January. Doctors across Africa said that a shortage of oxygen cylinders due to two companies dominating the market was putting patients at risk.

Oxygen supplies have been contentious since the start of the pandemic. In Iraq last July, families of Covid-19 patients seized oxygen tanks from the storage area of a teaching hospital amid fears supplies were about to run dry.

Egypt is recording more than 1,000 cases of the virus each day, but even health officials have admitted this is likely to be an undercount as there is no mass testing strategy. Zayed said her ministry’s official daily case count represented 10% of the likely cases. Many citizens avoid government-run hospitals until cases are advanced, meaning those admitted require more care.

“If we continue to have infections at this rate in Cairo, the hospitals will collapse and things will go out of control,” said a doctor working in Imbaba, Giza, who asked not to be identified. “Also, if doctors continue to die at this fast rate, we will enter a crisis,” they added.

The Egyptian Medical Syndicate reported that 290 doctors have died from Covid-19 so far.

The doctor working in Imbaba said monitoring efforts were in place to check on oxygen supplies, but doubted that the government’s new measures would be effective if cases continued rising. “Many things can go wrong due to the lack of transparency and the fact that no one wants to take responsibility. Several examples have shown that when doctors speak up they are the ones who are taken as a scapegoat and are blamed. The new measures will work just fine when the minster or a big official is visiting, but when we are overrun by patients they will not work,” they said.

Sabae said the biggest risk to Egypt’s healthcare infrastructure is pressure on staff. “The major defect is not infrastructure like the number of beds, it revolves around a potential shortage of medical personnel. Even all the money in the world can’t replicate trained doctors and nurses. This is a major concern … that we could reach a level where the medical personnel we have are completely overwhelmed with cases.”