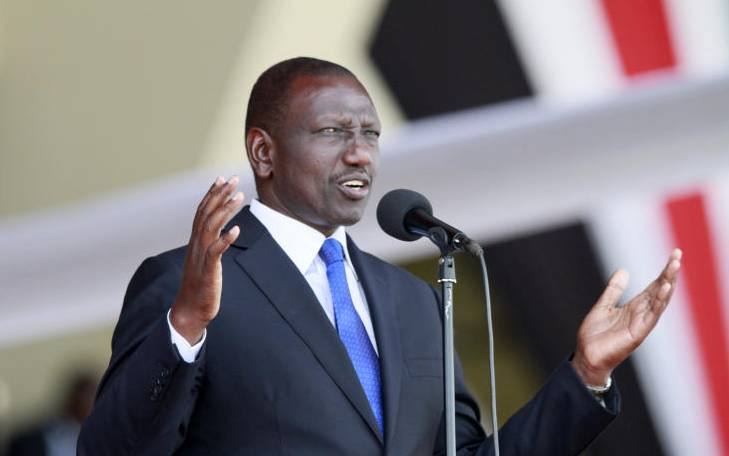 Deputy President William Ruto (pictured) on Sunday called for a truce between warring Jubilee Party factions, urging them to shun politics based on ethnicity and regionalism. “I want to ask all the Jubilee leaders to go back to the ideals which informed the formation of the party. We no longer want to hear the bickering and confrontational politics. We want to find a way of uniting all Kenyans,” he said.   “We no longer want to give the press fodder to fill pages with claims that Jubilee is divided here and there. All Jubilee leaders must stop grumbling.”

He was speaking during a church service at the Chepngobop Methodist Church. He was accompanied by Governor Paul Chepkwony and Members of Parliament Nelson Koech (Belgut) Sylvanus Maritim (Ainamoi) He said his political experiences have taught him to be humble.

“They tried to crucify me through trumped-up charges at the International Criminal Court (ICC) but I decided to pray instead. This was in order to move the country forward and remove hatred and tribal politics and for the last seven years. God had been faithful to me,” said Ruto.  Jubilee Party has recently been rocked by internal wrangles over succession politics and the ongoing war on corruption.

On succession politics, the storm was sparked by former Jubilee Party vice-chairman David Murathe who opposed Mr Ruto’s bid for the presidency in the 2022 General Election. While Mr Murathe’s opinion received support from some quarters, it is the war on corruption that threatened to tear the party apart. Close allies of Mr Ruto have claimed the so-called anti-graft war has been engineered to stop his bid for the presidency. Matters became more complicated after the March 9, 2018, handshake between President Kenyatta and ODM leader Raila Odinga that gave birth to the Building Bridge Initiative (BBI) report, which caused further tensions within the Jubilee Party. Belgut Member of Parliament Nelson Koech in his speech asked President Uhuru Kenyatta to issue a timeline for the implementation Building Bridges Initiative (BBI) report.

“Though the term of the task force has been extended, they must be given a strict timeline to complete their work. The country must not waste a lot of time discussing the report,” he said.  Koech added that issues affecting tea farming, education, infrastructure development among others were the issues that ordinary Kenyans require leaders to pay urgent attention to.  “This is the reason we ask the President alongside the Deputy President to hasten the implementation of the Building Bridges Initiative report,”  Governor Paul Chepkwony said the construction of the Sh1. 7B water expansion for Kericho Water and Sanitation Company funded by the German KFW Bank was on course.