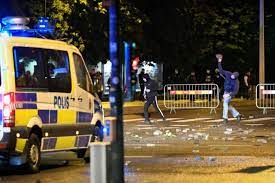 How can the Swedish government sit back and allow the country to deteriorate into a civil war potential? This is the glaring situation Swedish officials and police are unwilling to address all because of their high pedestal view on defending a rightwing extremist to say his lot in public!

Nevermind if he is a racist, nevermind if he is a bigot, or nevermind he wants a quick deportation of all Muslims out of the country – a view of every Swede apparently – and this statement needs to be taken with a pinch of salt – Rasmus Paludin must be allowed to express his words, say what he wants to froth out and indulge in abhorrent action like burning the Quran in public because it his right to express his opinion!

But this is beyond madness. To allow a racist lawyer to express his opinion freely, even if it devastates the senses and sensibility of every Muslim, who for all intense and purposes, are Swedes, is not the best way to defend democracy and freedom of speech as the authorities like to point out, right from its Prime Minister Magdalena Andersson and her government to street officials and police. It is surely a damning view of how Sweden treats its minority citizens.

To burn the Quran in public, not just once but many times by a man who is not Swede but a naturalized Dane, and himself is of a minority status, must say a lot about his extremist politics through his Stram Kurs (Hard Line) Party he wants to paddle in Sweden, a country that has hitherto been regarded as a place of tolerance and integration.

His views must stand out as a spike at the heart of social cohesion in the country.

For nearly a week now Sweden has been in total disarray. The Muslim minorities – and who can blame them – have been protesting all over the country at the sight of a man burning their religious book and which is callously throttling their belief systems. They been rowdy, smashed cars and counter-demonstrated through out Sweden starting from Stockholm to the different parts of the country like Norrkoping Malmo, Orebro.

There have been arrests, police injured, loud voices heard against Paludin. But every time, he is protected by the police officers who keep saying he must have his right to free speech and to take actions like burning the Quran. Its a crazy view that is only practiced in Sweden. In different parts of Europe like France and Germany Paludin has been banned, and quite rightly so, with one of the reasons being these countries have large Muslim populations.

Its to be wondered, and this not to advocate it,what would happen, if one of the Muslim activists, just came up and started to burn copies of the Bible. What would countries like Sweden, who are supposedly Christian in faith would do? Would such an act be regarded as sacrilege and something that is abhorrent. But right-minded Muslims would not do that because the Bible is regarded as a holy, celestial book from the heavens, like the Torah.

Therefore in the interest of “freedom of thought”, free speech, expression and keeping the peace, the right-wing politician-turned-lawyer-turned activist – how does that fit it is difficult to fathom – must be stopped. His burning of the Quran which is apparently part of his anti-Islamic agenda needs to be stopped now because of its crusade. He is taking this, and under the protection of the police as part of his election manifesto, in a campaign he has already started for the September legislative polls in Sweden.

If this is the case, and something he would need 24/7 protection for because of his controversial and extremist views, Sweden is in for a rocky, heavy, unstable ride for the next six months. And judging from what has been seen in the past week, Muslim minorities who have long made Sweden their abode, residence and country will not take it laying down. Is this worth the aggro?