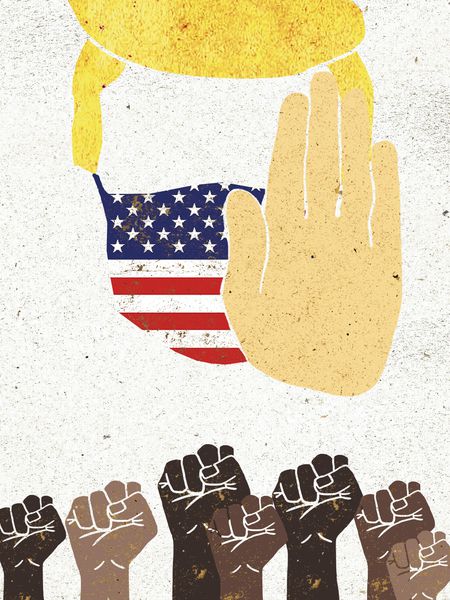 What is truly alarming about the current moment is not the set of actions that the Trump administration is undertaking, but rather the historical context in which these actions are taking place

Throughout Donald Trump’s presidency, there has been concern about his anti-democratic tendencies. But in this summer of crisis in the United States, there has been increasingly open discussion about a particularly dangerous variety of authoritarianism familiar from 20th-century European history. In the wake of the years of virulent anti-immigrant sentiment, including changes in immigration law to bar residents of many Muslim countries from entry to the United States, tirades against the free press, and, most recently, the sending of federal forces into US cities to counter largely peaceful protests in favor of racial justice, more and more politicians and journalists are using the term “fascism” to describe the threat posed by Trump’s administration.

The word “fascism” is loaded – and its use in the context of the Trump administration remains controversial. So, for those of us who think the use of the dramatic term “fascism” is in fact apt, it is worthwhile stepping back to present the case.

The United States, even under the Trump administration, is at this moment not a fascist regime. Though protestors on the street are facing violent retaliation from federal forces, one can criticize the ruling party and its leader without fear of repercussion. The courts, while stacked with extreme partisan Trump appointees, still operate relatively independently. The Congress of the United States is controlled by the opposition party. If we are thinking about regimes, the Trump administration does not preside over a fascist regime.

If our anti-fascism is serious, we need to be concerned about fascist social and political movements

Even if one thinks it unlikely that the US will be transformed into a fascist regime, it is also legitimate to be concerned about fascist political tactics. The basis of a healthy democracy are liberal democratic norms – equal respect for all citizens, and tolerance of difference among beliefs and practices. Fascist politics presents difference as a mortal threat. Freedom, the lifeblood of democracy, is the enemy of fascism. Politicians who target Muslims, atheists, gays, and women’s choices over abortion and birth control are seeking to limit freedom, ultimately targeting the basis of a democratic culture. Such attacks weaken democracies even if a fully fascist regime does not emerge on the other end of the political process.

Politicians who target Muslims, atheists, gays, and women’s choices over abortion and birth control are seeking to limit freedom, ultimately targeting the basis of a democratic culture

But current concern is clearly not just about tactics. It is a concern about a potential future transformation of the character of the US regime. What reasons are there for such fear about the world’s oldest democracy?

Open racism is a characteristic feature of fascist political movements and parties. President Trump’s politics have always involved racism. Since 2015, he has demonized immigrants, and responded harshly to Black political protest. Trump has represented the drive to remove monuments to slavery’s defenders, including military bases named after them, as anti-American. Trump has made a conscious choice to wage his presidential campaign on fighting Black Lives Matter, a movement for racial justice. Most worrisomely, he has represented its supporters as terrorists.

A characteristic feature of fascist leaders is the way they alter reality to give their propaganda some semblance of truth. As Hannah Arendt writes, “[i]t was always a too little noted hallmark of fascist propaganda that it was not satisfied with lying but deliberately proposed to transform its lies into reality.” When Trump decided to send federal forces into Portland, the protests there and elsewhere had started to taper off – sending forces into Portland, and threatening to send them elsewhere, was a provocation intended to cause the very disorder that the forces were supposed to be there to prevent. This use of federal forces, to provoke disorder, has little precedent in US history.

Trump’s recent tweet denouncing mail-in voting and raising the possibility of delaying the election is an example of several classic fascist tactics rolled into one. Fascist leaders denounce democratic processes as corrupt and untrustworthy. In classic fascist fashion, it would be following his recommendations in the tweet, such as preventing mail-in voting and delaying the election, that would in fact place the election’s validity into doubt. Fascist leaders also invariably point the finger at others for actions that they themselves are undertaking. In this case, it is Trump and the Republicans who have been imperiling the validity of elections, by for example voter suppression tactics. But the tweet points the finger at Democrats who have been trying to ensure the validity of election results in the face of such tactics.

But as ugly as they may be, what is truly alarming about the current moment is not the set of actions that the Trump administration is undertaking, but rather the historical context in which these actions are taking place.

A one-party state is a characteristic feature of authoritarian regimes; fascist regimes characteristically represent their opponents as illegitimate, as traitors and communists. The US Republican Party has long treated its political opponents as illegitimate, governing as “the Party of ‘No’” during Barack Obama’s administration, and branding their centrist opposition as secret communists. Republicans have managed to win multiple presidential elections and the Senate, despite having a minority of voters in the country behind them. There is legitimate concern that the US Republican party is a minority party seeking permanent one-party rule.

The second reason for concern is that the United States has just emerged from a “war on terror”, in which torture was used against suspected terrorists. It led to the creation of a massive new state administration– the Department of Homeland Security – with new national police-like forces, ICE and CBP, granted extraordinary powers to track down and arrest undocumented residents. It is just these quasi-military forces, trained to treat non-US citizens with brutality, that have been sent into American cities to antagonize protestors. Fascist regimes often emerge after colonial wars, where the forces that fought these wars are directed domestically, against political opponents. It is hard not to see parallels, and at the very least the beginnings of such parallels, in the current moment.

So, it is not the particular actions taken by the Trump administration, disturbing as they may be, that are the cause for the most alarm. It is rather that these actions are taking place in the context of a governing political party that has shown tremendous ruthlessness over a long period in the service of controlling a country in which it has minority support. And they are taking place in a country that has failed to dismantle the security apparatus it developed in a failed Middle Eastern imperialist adventure. This security apparatus was trained to locate foreign terrorists and gang members. It has been told for several years that all undocumented residents are terrorists and gang members. And now the president has instructed them to treat peaceful American protestors as terrorists. This moment is frightening not just because of current demons, but because the country has for too long allowed its prior demons to persist undisturbed.

Jason Stanley is the Jacob Urowsky Professor of Philosophy at Yale University. He is the author of several books including How Fascism Works: The Politics of Us and Them (Random House).