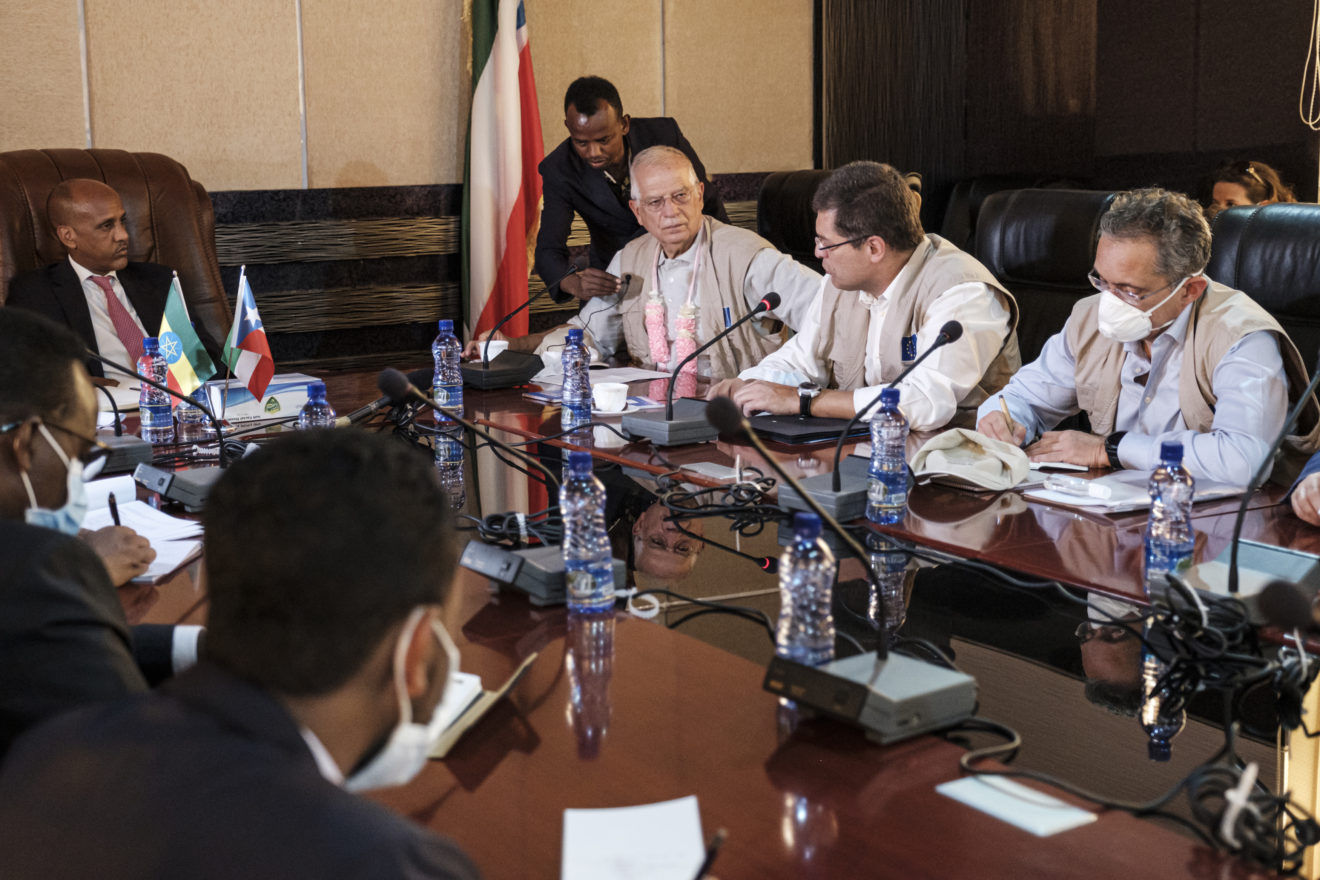 A visit to Addis Ababa in October by a high-level delegation including EU foreign policy chief Josep Borrell was designed to showcase a donation of 7.5 tons of coronavirus testing kits. Instead, it ended up setting off fears of a super-spreader event at the African Union headquarters and among top Ethiopian officials.

Borrell and EU Crisis Management Commissioner Janez Lenarčič, who was also on the trip, were forced to self-isolate after learning that a member of their delegation had tested positive for COVID-19 upon returning from Africa.

At the time, little attention was paid in Europe to the firestorm that news of the infection set off in the Ethiopian capital where Borrell had met senior AU leadership, as well as Ethiopian Prime Minister Abiy Ahmed and President Sahle-Work Zewde. Health precautions were taken throughout the trip, but a video of the meeting with Zewde shows Borrell wearing his mask improperly, with his nose exposed. In other meetings, Borrell was pictured not wearing a mask at all.

The events surrounding the visit — and EU-Africa relations in general — came under renewed scrutiny after the surprise, last-minute cancellation by the African side of a planned videoconference summit that was to be held last Wednesday.

The cancellation was not directly related to Lenarčič and Borrell’s visit, but it signaled tensions in EU-Africa relations, and raised questions about the status of an effort by Commission President Ursula von der Leyen and Council President Charles Michel to overhaul EU foreign policy toward its southern continental neighbor.

Indeed, EU and AU officials and diplomats, as well as outside policy experts, said that the EU effort has been undermined by the pandemic. Apart from disrupting planned meetings, it has intensified competition with China for influence in Africa, and highlighted grievances over current and historic treatment of African countries and officials, particularly in the sphere of public health.

Provocative remarks by two French medical experts last spring about a potential study in Africa on the effects of a tuberculosis vaccine in combatting coronavirus spurred widespread outrage over the suggestion Africans might be used as guinea pigs. It prompted Tedros Adhanom Ghebreyesus, the Ethiopian director general of the World Health Organization, to declare: “The hangover from a colonial mentality has to stop.”

African leaders have expressed frustration both over Europe being a major source of coronavirus infections in Africa — the index cases in many African countries can be traced to travelers from Europe — and about not getting credit for having managed the pandemic better than wealthier countries, so far at least.

“The response of most African countries to this unprecedented public health threat has been better organized, better informed, and better implemented than many of their Western counterparts,” an analysis in South Africa’s The Mail and Guardian concluded. “Leaders have looked to scientists and public health experts to inform their decisions, and have acted early and with considerable determination ― even though most African governments are operating with just a fraction of the resources available to richer countries.”

African leaders have been more assertive on the world stage, for example, with a group appointed by South African President Cyril Ramaphosa, who currently holds the rotating chair of the AU, pushing G20 nations to provide financial assistance including debt relief. “The region’s leaders have contrasted what they perceive as a mishandling of the pandemic by the United States and Europe with the record of African health ministries and institutions, including the Africa CDC,” Judd Devermont, director of the Africa Program at the Center for Strategic and International Studies wrote in a paper.

“We discouraged it,” an AU official said, speaking on the condition of anonymity to protect diplomatic relationships. “He still came.”

The shipment was part of a series of flights under the EU’s “humanitarian air bridge” program. Lenarčič and the EU’s commissioner for international partnerships, Jutta Urpilainen, had each accompanied flights to African countries, including Burkina Faso, the Central African Republic and Sudan, but this was Borrell’s first time doing so. EU diplomats view publicizing the program as crucial in its competition with China for influence in Africa. China’s relations with Africa have also been tested by the pandemic, and Beijing has responded by stepping up and drawing attention to its own humanitarian efforts.

But the EU’s desire for a photo-op with the planeload of donated test kits played into a historic narrative of Westerners portraying themselves as saviors rather than oppressors in Africa, said Helen Tilley, a professor of history at Northwestern University who has written extensively about medical and health issues in relations between Europe and Africa.

“It’s the sense of hapless and helpless victims always being the go-to narrative,” Tilley said. “And the usual willingness on the part of powerful diplomats in Europe or North America to ignore culpability to deny that, say, economic policies or trade policies cause some of the poverty that then people swoop in and try to put a Band-aid on.” Tilley said her own research looking at African diplomats working with the World Health Organization found them constantly confronting what she called “the arrogance of ignorance, a constant slap in the face.”

African officials said that rather than getting a quick official notification of the contact risk, they only learned about the infection in the EU delegation when Borrell tweeted about it. After seeing Borrell’s tweet, the AU official said, “We forced the EU to formally confirm … No one was happy.”

AU officials say a total of five people were infected as a result of the visit, including one case in Addis Ababa — but those numbers were impossible to confirm. The EU institutions have a spotty record in responding to potential cluster outbreaks. One European who was on the trip said there was no official notification about the positive case to the EU travelers.

EU officials flatly disputed the African account, saying they were never urged not to travel. “We didn’t receive any request not to show up,” an EU official close to Lenarčič said.

“No one discouraged us,” a Commission official said. “Obviously we were there. We were received.”

The EU side say they suspect its delegation member most likely was infected in Africa. EU officials stressed that in accordance with normal protocol all members of the delegation were tested prior to leaving Brussels, and anyone who had tested positive would have been barred from traveling. Similarly, they said that all travelers were tested again upon return, which is when the single positive case was discovered. Borrell and Lenarčič tested negative each time, the official said.

Still, the previously unreported diplomatic contretemps forms part of the backdrop of events that led to the cancellation of the EU-AU videoconference summit, and illustrates the EU’s struggle to improve the geopolitical relationship.

The summit scheduled for last Wednesday had already been downgraded twice — from initial plans to hold a full summit involving all 55 AU heads of state and government plus their entourages and all 27 on the EU side, to a smaller in-person meeting, and then to a virtual meeting.

“They wanted a whole big jamboree,” the AU official said. “They wanted everybody to come to Brussels.”

Even as the health situation made a large gathering highly unlikely, Michel, who is the EU’s official host of such gatherings and regards relations with Africa as a personal priority, had resisted postponing and instead pushed for plans for an event with strict health precautions. Other EU officials were similarly reluctant to cancel, especially because China organized its own annual summit with African leaders via videoconference in June. EU officials felt they were already playing catch-up.

But when the AU shifted some of its own gatherings to a virtual format, that made it hard for leaders to justify traveling to Brussels. As a solution to that dilemma, Ramaphosa, the South African president, sent a confidential letter to Michel asking for a videoconference involving a select group of AU and EU leadership to be held instead.

But on the night before the event, Ramaphosa called it off altogether, saying too many members of the AU’s “bureau” — five heads of state and government representing North, South, East, West and Central Africa— had scheduling conflicts. A spokesman for the Council said only that there were “agenda problems.”

In fact, neither explanation holds up. Awkwardly, one diary complication seemed to be that Egyptian President Abdel Fattah El-Sisi was in France to receive the republic’s highest civilian honor from French President Emmanuel Macron.

One EU diplomat who monitored the developments said the summit likely fell apart as a combined result of the reluctance in Brussels to accept cancellation of the in-person meeting, and the ambivalence among African leaders about participating in a virtual meeting with no concrete outcomes expected.

Devermont said African leaders likely perceived the EU to be just going through the motions. “‘How do we still check the box on the African engagement?’ is not the pathway to a successful outcome,” he said.

The AU official said there was no lack of interest on the African side. “Of course we wanted to have the meeting,” the official said. “The commitments are there. Unfortunately, of course, COVID has upset agendas … 2020 has been that kind of year.”